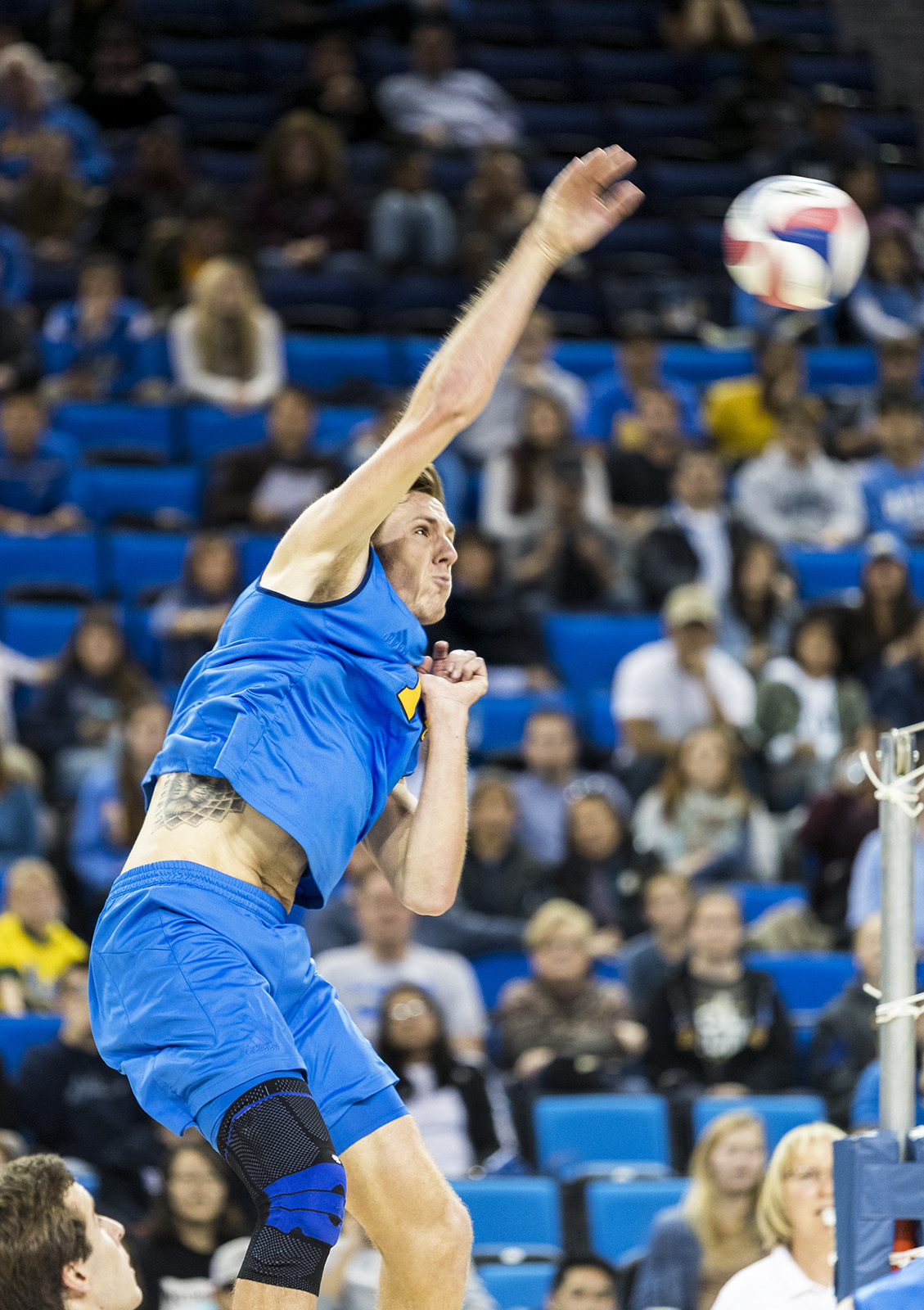 Junior outside hitter Jake Arnitz had a game-high 20 kills on a .450 hitting percentage. Arnitz had twice as many kills as the second man up for UCLA, freshman middle blocker Daenan Gyimah. (Hannah Ye/Daily Bruin senior staff)

The Bruins were the victors of last year’s crosstown rivalry match and came out on top in four sets once again Friday evening.

The two teams kicked off set one keeping things relatively even, tying it up at nine apiece.

“It’s USC, so everybody’s going to be super stoked in that first set,” said senior middle blocker Mitch Stahl. “Both teams are going to be bombing balls from the service line.”

The Bruins nabbed a slight lead to eventually take the first set 25-20, thanks to strong swings out of the middle. Freshman middle blocker Daenan Gyimah hit 1.00 in the first set, scoring points with all four of his attacks.

“There’s a hundred things we can make better on (Gyimah) and that’s what’s so exciting,” said coach John Speraw. “Obviously he’s going to be a great player in this league.”

USC gained some momentum from there, leading in points for most of the second set. The energy from UCLA’s side of the court faltered briefly, due to pressure that the Trojans delivered in their tough serves.

“They came out fired up, and they were really tough from the service line,” said junior outside hitter Jake Arnitz. “I thought that was the biggest struggle tonight.”

Stahl and sophomore setter Micah Ma’a put up a formidable wall at the net, helping UCLA come back from a gap of five points. Stahl finished the night with eight blocks, as the Bruins out-blocked the Trojans 13-7.

“Their hitters have some specific tendencies that we don’t see in film, but I think we did a really good job executing on it,” Stahl said. The veteran blocker also credited his pin hitters for setting up well for a solid wall from left to right.

The Trojans kept the Bruins at bay in the second set, putting as many as five points between themselves and their rivals. Although UCLA returned to tie things at 18, the Trojans ultimately claimed set two 25-23 as the Bruins dropped their first set since their loss to Ohio State.

“We deserved that loss in that set,” Speraw said. “We didn’t play patient volleyball, we didn’t keep our energy where it needed to be and we didn’t make the best choices at times.”

UCLA responded with a five-point run to start off the third set. The Bruins maintained their control of the set, leading with as many as seven points 15-8.

Arnitz led the team in attacks, posting 20 kills. The junior put as many as 10 kills between himself and Gyimah, the second-highest Bruin attacker. UCLA rode out its gap to a 25-20 win for set three.

USC’s strongest attacker this season has been outside hitter Lucas Yoder. However, Yoder failed to make the same impact on the stats sheets in Pauley Pavilion as he did against previous teams.

“I thought they got the distribution out a little bit more,” Arnitz said, mentioning how Yoder’s teammates, like outside hitter Aaron Strange, stepped up this game as well.

USC wasn’t willing to give up the deciding set so easily.

With the fourth set tied at 14 apiece, it was unclear whether or not the game would go to five. But it was the Bruins who made a run toward the end to claim the rivalry match for another year.

“Right now, there’s just such high expectations for our performance. We have to make sure we manage those with an understanding that there are good volleyball teams out there, and they make plays,” Speraw said. “I love the expectation, ’cause we think we’re good and we can make more plays. We just have to keep working.”