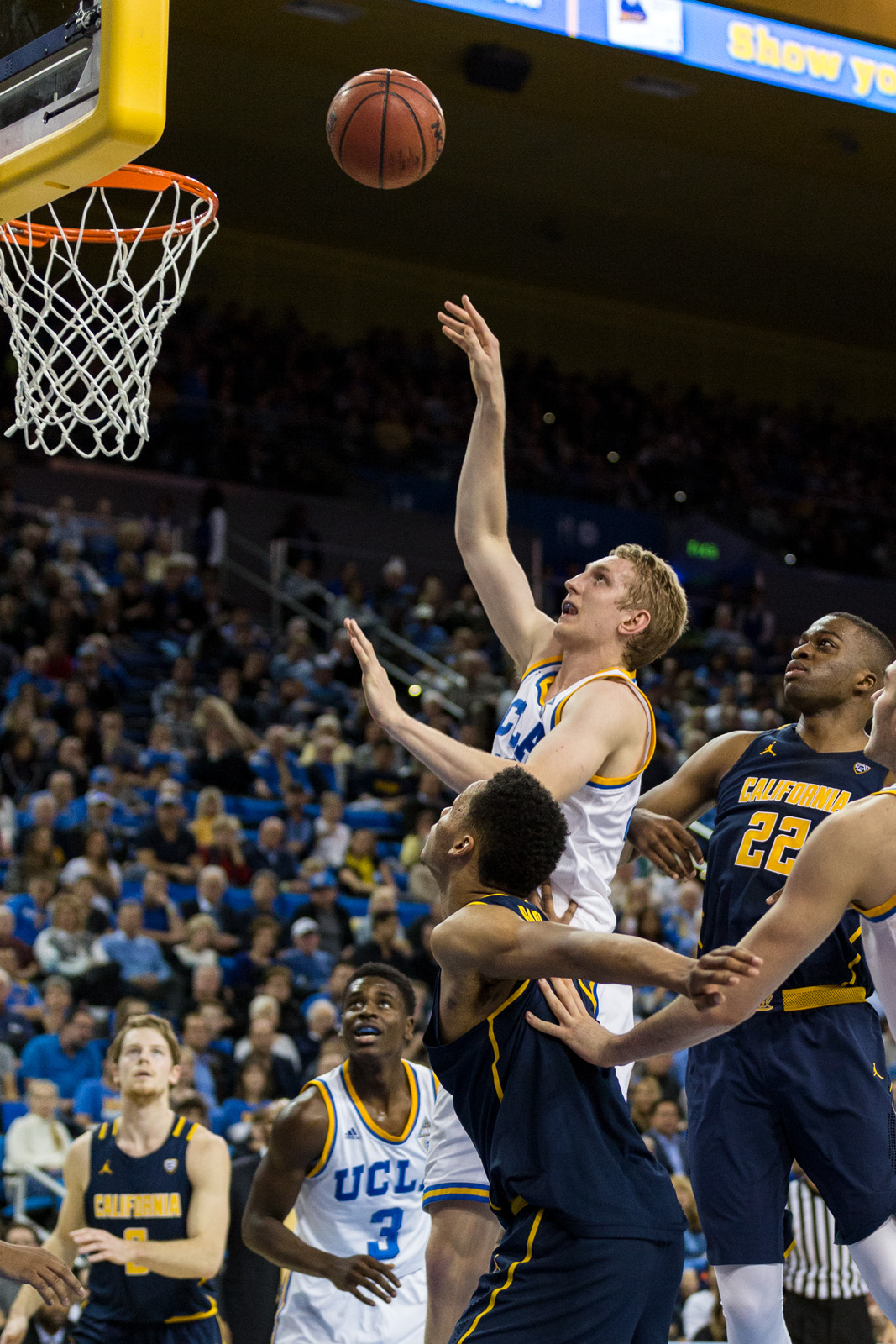 With its army of dangerous 3-point shooting and devastating commitment to ball movement, UCLA men’s basketball boasts the nation’s top offensive rating – and, by most accounts, its most entertaining offense.

Junior center Thomas Welsh is likely the least exciting of the Bruins’ top scorers, the seven-footer’s mid-range jumpers representing a relic of an older era in the middle of an offense that seems otherwise to exemplify modern basketball.

In the era of basketball’s analytics revolution, teams increasingly hunt shots either at the rim or behind the 3-point arc, with the popularity of the mid-range jumper plummeting.

But Welsh has been so deadly on his baseline jumpers that they represent a good outcome, even for the nation’s best offense.

The big man is shooting a devastating 71 percent on short mid-range shots along the baseline, per Synergy Sports, a mark that makes the shot more efficient than UCLA’s nation-leading effective field goal percentage of 61.7 percent.

Largely thanks to Welsh, UCLA ranks third in the nation in field goal percentage on two-point jumpers, per Hoop-Math.com.

Though the seven-footer has arguably the least exciting offensive game of UCLA’s six top scorers, his skill set provides a strong complement for the rest of the Bruins’ options.

In addition to his shooting, he’s leading the Pac-12 by a significant margin in offensive rebounding rate during conference play, and he ranks in the 97th percentile nationally in points per possession on put-backs, according to Synergy.

“It’s just about being aggressive and being consistent going to the glass every single time,” Welsh said Tuesday. “I just try to be there, try to go hard to the glass and I’ve just been doing well at that so far.”

And Welsh’s smart play – he boasts the nation’s sixth-best turnover rate among rotations players – has allowed the Bruins to play at a pace not typically suited to seven-footers like him.

“It’s not just how hard you run the floor, it’s also how quickly you can think,” coach Steve Alford said. “People might not equate Tom as someone that is a super-fast athlete, but if you watch Tom play, he runs the floor very well.”

Freshman at the free throw line

Even as the freshman forward TJ Leaf nailed over half of his 3-point jumpers, he has continued to struggle from the free-throw line.

Over the past ten games, he’s made just 56.7 percent of his attempts at the charity stripe.

Senior guard Bryce Alford said it can be tough for freshmen to adjust to shooting freebies at the college level.

“It’s a different background,” Bryce Alford said. “A lot of high school gyms, it’s just a wall behind the hoop. There’s not crowds yelling at you, so it’s a different atmosphere to shoot free throws in.”

Freshman point guard Lonzo Ball has recovered from a slow start at the line to shoot 71.4 percent in conference play.

“He’s just adapted to it and got back to what he does,” Bryce Alford said of Ball. “He’s that big-time of a shooter that we knew he would.”