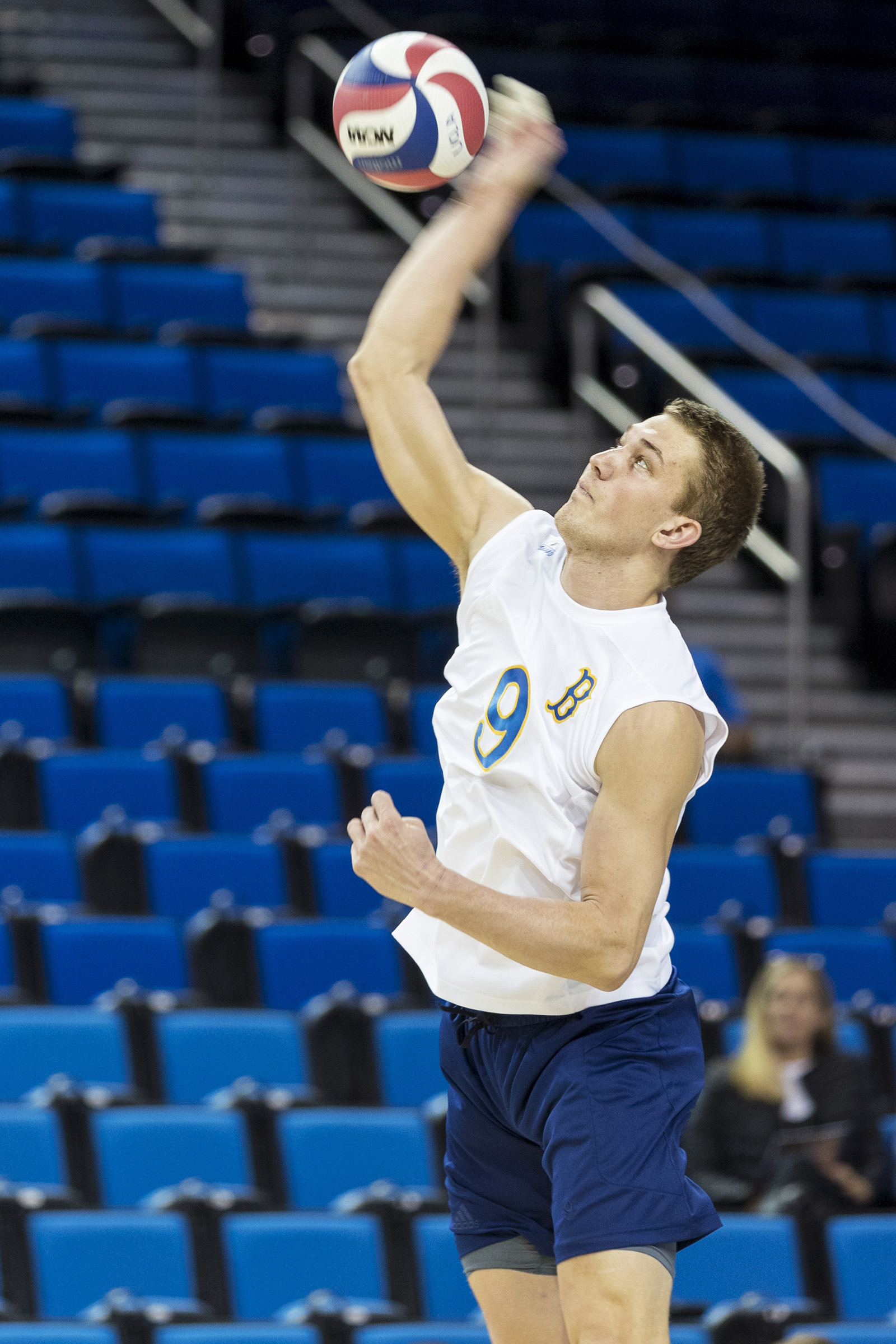 Junior outside hitter JT Hatch filled up the stat sheet with a team-leading 13 kills on a .579 hitting percentage. Hatch also swung for a couple of powerful serves and notched four digs. (Hannah Ye/Daily Bruin senior staff)

Nighttime precipitation, and a slightly smaller crowd than usual, did not rain upon the UCLA men’s volleyball team’s parade Wednesday night.

UCLA hit .648 in the first set while the Lancers swung for .350. However, both teams’ percentages fell as the night went on, which was something the Bruins talked about in their post-game meeting, according to senior libero Jackson Bantle.

“In the beginning we were passing very well,” Bantle said. “We just talked about it with (coach John Speraw). We hit .648 in the first, something like .450 in the second and only .185 in the third. It just came down to passing and focus and we did those two things really well in the first two games.”

Beyond the aforementioned high hitting numbers, UCLA hit strong serves and looked solid on the defensive end in the first set.

Following the successful opening set, the Bruins did not produce similar numbers in the second set. The first third of the set was marked by each team trading point-for-point. The next was one of runs as UCLA pulled away, only to be caught by Cal Baptist. And in the third the Bruins finally ran away with the set and took it 25-17.

Though the match was nearly over and UCLA held a lead, Speraw called a timeout. His team hit only .185 in the set and displayed a plethora of mental errors.

“It was very easy to see we lost our focus,” Speraw said. “As a maturing team we shouldn’t allow that to happen. It can happen to any team, but the mark of an experienced, mature team is that they bring the same kind of energy level and competitiveness to every point.”

Junior outside hitter JT Hatch led the Bruins with 13 kills on a .579 hitting percentage and freshman middle blocker Daenan Gyimah followed with 10 kills and a .750 percentage.

Gyimah has played very well in the starting role, especially with redshirt junior middle blocker Oliver Martin being, as Speraw described it, a little banged up.

However, even when Martin is back to full health, Gyimah will remain the starter Speraw said.

“(Gyimah) is a starter for us now,” Speraw said. “You have to scheme for him, he’s a very unique offensive talent.”

The win was UCLA’s third straight set victory in a row, but there is still much to accomplish. Speraw made that clear when he ushered his players straight to the locker room after the win.

“(Speraw) told us to hold ourselves to a higher standard,” said sophomore opposite/setter Micah Ma’a. “We just need to improve every single day and stay accountable.”