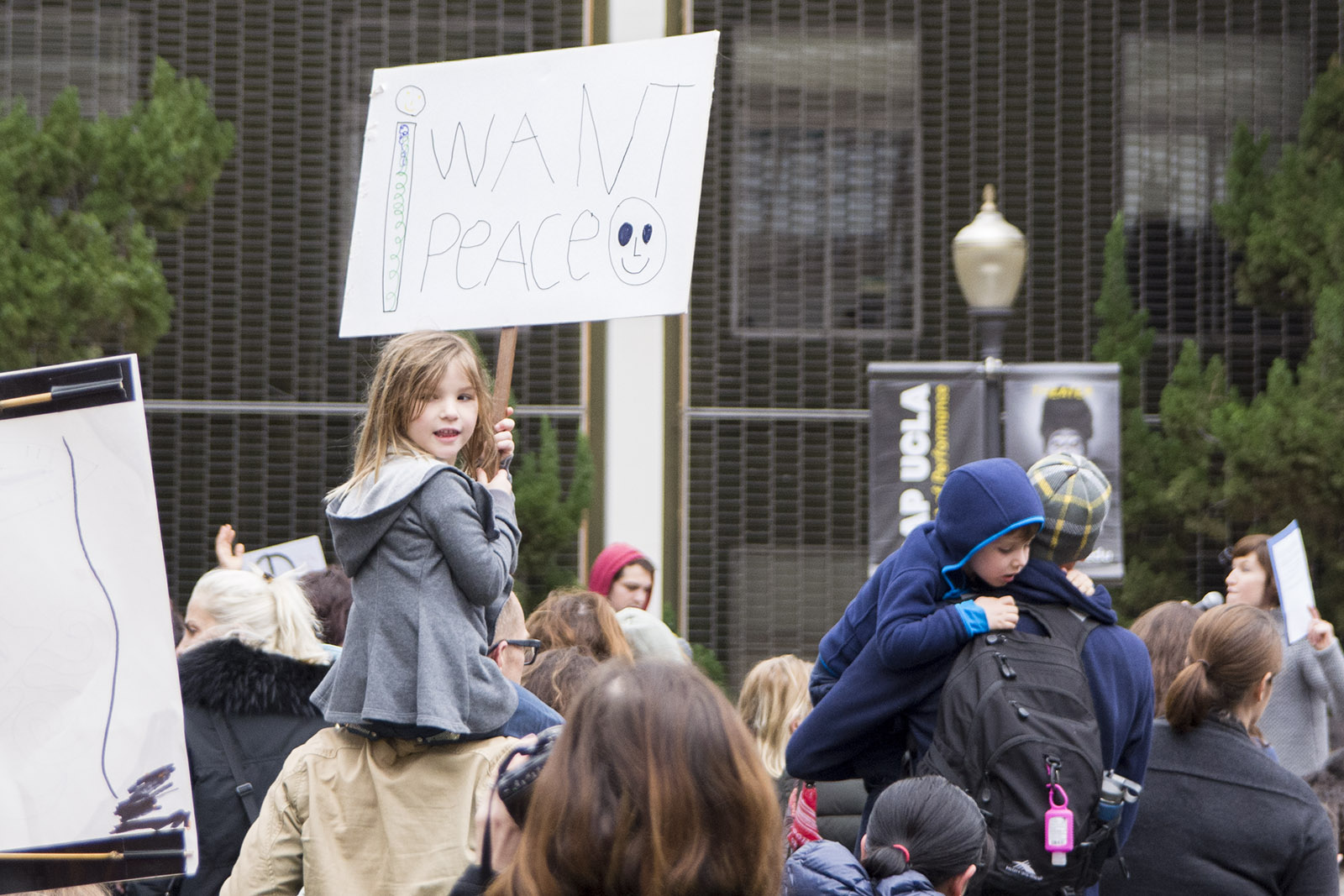 Students and their parents participated in a March for Equality around UCLA’s campus Wednesday afternoon, carrying signs calling for peace and speaking out against violence. (Eileen Lising/Daily Bruin)

Hundreds of elementary school students and their parents from Los Angeles County took time off school Wednesday afternoon to march for equality.

Holding up signs that read “Kids for Peace,” “Immigrants Welcome” and “Break the Wall,” the children marched around the UCLA campus, sang songs and listened to speeches. The march was intentionally organized between Martin Luther King Jr. Day and the presidential inauguration, said Lara Stemple, director of graduate studies at the UCLA School of Law.

Stemple said that though the children learned in school about nonviolent protests as an act of resistance against injustice, they expressed interest in participating in one of their own. Stemple, a mother of a fifth-grader who goes to Larchmont Charter School and second-grader who goes to the UCLA Lab School, helped organize the march and led a teach-in to educate students about the history of protests.

“We wanted to give the kids a chance to learn that this is not the end, we still have a voice, we can still speak out,” Stemple said.

“In this city if we see any kind of injustice, we speak up, we stand up and we protest,” Wakeland said.

Wakeland said she thinks the children need to understand they inherit a vast history of fighting against what is wrong as they live in Los Angeles and they should continue doing the same.

After the speech, the children swayed their heads and sang along to the protest song “If I Had a Hammer” as they stood on the shoulders of their parents in the cold.

Maya Henry, one of the protesters and a fifth-grade student at the Larchmont Charter School, said she participated in the protest because she was extremely disappointed with the messages of inequality and injustice she thinks were prevalent during the election.

“It is important to me that no one feels like they don’t have a right to be who they are, whether it is gay or lesbian people, or people from a different culture or county or whoever,” Henry said. “That doesn’t matter. We are all human.”

Henry said she and her classmates stayed back after school for several days and during lunch hours to make signs for the protest.

Heidi Lindelof, an organizer of the protest and a mother of a student who attends the UCLA Lab School, said she thinks children in schools were very engaged and surprised by the results of the election. She added she thinks they wanted to do something more active to express their concerns.

“The kids have opinions and ideas of their own,” Lindelof said. “They don’t like seeing unjust behavior. They want to see mommy and daddy make the same money. They want equality.”

Taiya Shiva, another protester, held up her sign, which read “I am Human,” up high during the entire protest. She said she thinks the media shows how injustice is being perpetrated on people due to the color of their skin, sexual orientation and gender.

“I don’t feel secure anymore,” Shiva said. “And that is why I wanted to come out here and tell people that.”