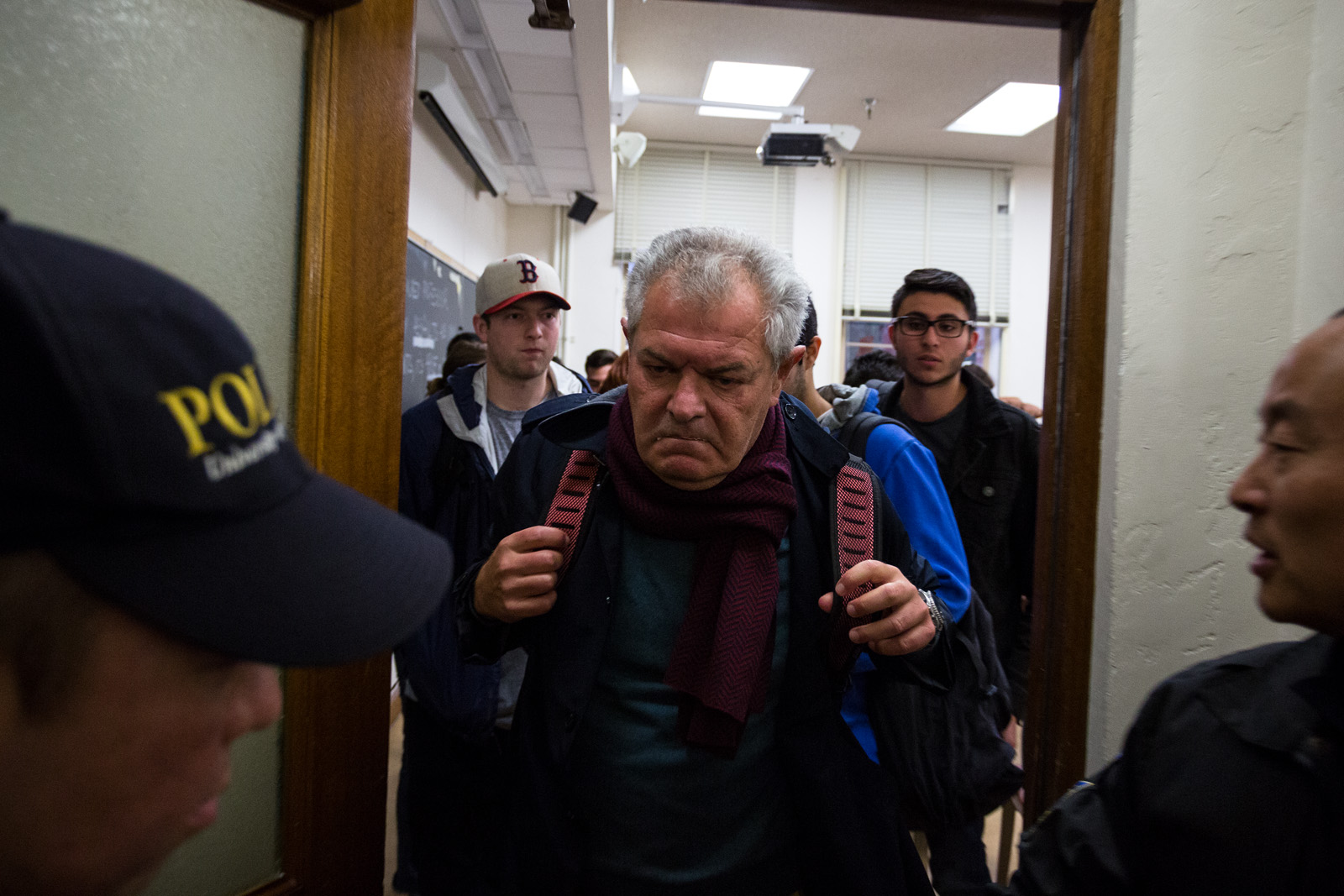 By Rupan Bharanidaran and Jillian Frankel

Members of the Bruin Consent Coalition and Bruins Against Sexual Harassment protested a class taught by history professor Gabriel Piterberg. Two of Piterberg’s graduate students accused him of making unwelcome sexual advances and forcing his tongue into their mouths in 2013.

The protesters held up signs saying “Fire Piterberg” and “Zero tolerance for sexual harassment,” and chanted “Hey, hey, ho, ho, Piterberg has got to go” at the classroom in Royce Hall. Piterberg released the class after about 20 minutes, an hour before its scheduled end time.

History graduate students Nefertiti Takla and Kristen Glasgow sued UCLA in 2015, saying the university did not properly handle their sexual assault complaints. UCLA suspended Piterberg for a quarter without pay in 2014, and settled the lawsuit with the graduate students in September.

The university also removed Piterberg from his position as director of the UCLA’s Center for Near Eastern Studies, required him to attend sexual harassment training and prohibited him from meeting with students individually. The history department also restricted Piterberg’s access to his office during weekends.

Chloe Pan, a Bruin Consent Coalition co-director, said she hopes the protest will send a clear message to professors who are accused of sexual harassment in the future.

“If the administration isn’t going to be holding them accountable, the students will,” said Pan, a third-year international development studies student.

She said a new Title IX coordinator has been hired since Piterberg was accused in 2013 and the university has made positive policy changes in regard to sexual assault and harassment, but more steps need to be taken.

Henry DeGroot, a member of Bruins Against Sexual Harassment and a third-year political science student, said he thinks the controversy around Piterberg is a workplace issue as well.

“The university has the money to keep Piterberg and pay the legal fees, yet we have skilled trade workers going on strikes because the university says they don’t have the money for their wages,” he said.

Some of the students who took Piterberg’s class said they did not know about the sexual assault case until they saw the protests.

The first student to leave Piterberg’s class was Andrew Wheeler, who left after 20 minutes. He said he heard about the controversy regarding Piterberg, but didn’t know the extent of the circumstances. He is now planning to drop the class.

“I took the class because I wanted to give him the benefit of the doubt, but it’s not worth it,” said Wheeler, a fourth-year history student. “It’s not a good learning environment.”

Ariel Pazooky, a fourth-year history student, said he is thinking about dropping the class because of the protests.

“I took this class just to fulfill a history requirement,” he said. “I’m probably just going to drop it if (the protests) are going to happen every class.”

[Photos: Click here for a full gallery of the student protests]

Mahmoud Shukry, a fourth-year Middle Eastern studies student, said while he agrees with the protesters, he disagrees with their methods.

“They’re affecting our education,” he said. “I don’t understand why they are protesting the person instead of protesting the university which made the decision.”

Yong-Yi Chiang, a Bruin Consent Coalition co-director, said students organized the protest to support survivors and make sure people enrolled in the class were informed of the accusations against Piterberg.

A letter from Stephen Aron, chair of the history department, outlined that Piterberg will be required to hold his office hours in Charles E. Young Research Library through the academic year and must leave the door open while meeting with students.

“It doesn’t even sound like UCLA trusts the professor,” said Chiang, a third-year international development studies student. “It’s important for survivors to know we’re here and that we hear their stories.”

She added that Bruin Consent Coalition plans to partner with Bruins Against Sexual Harassment to create a list of tasks outlining steps the university can take to improve its response to cases of sexual harassment and assault on campus.

The history department cancelled Piterberg’s second class, History 105A: “Survey of Middle East, 500 to Present: 500 to 1300” for the day, UCPD officers confirmed.