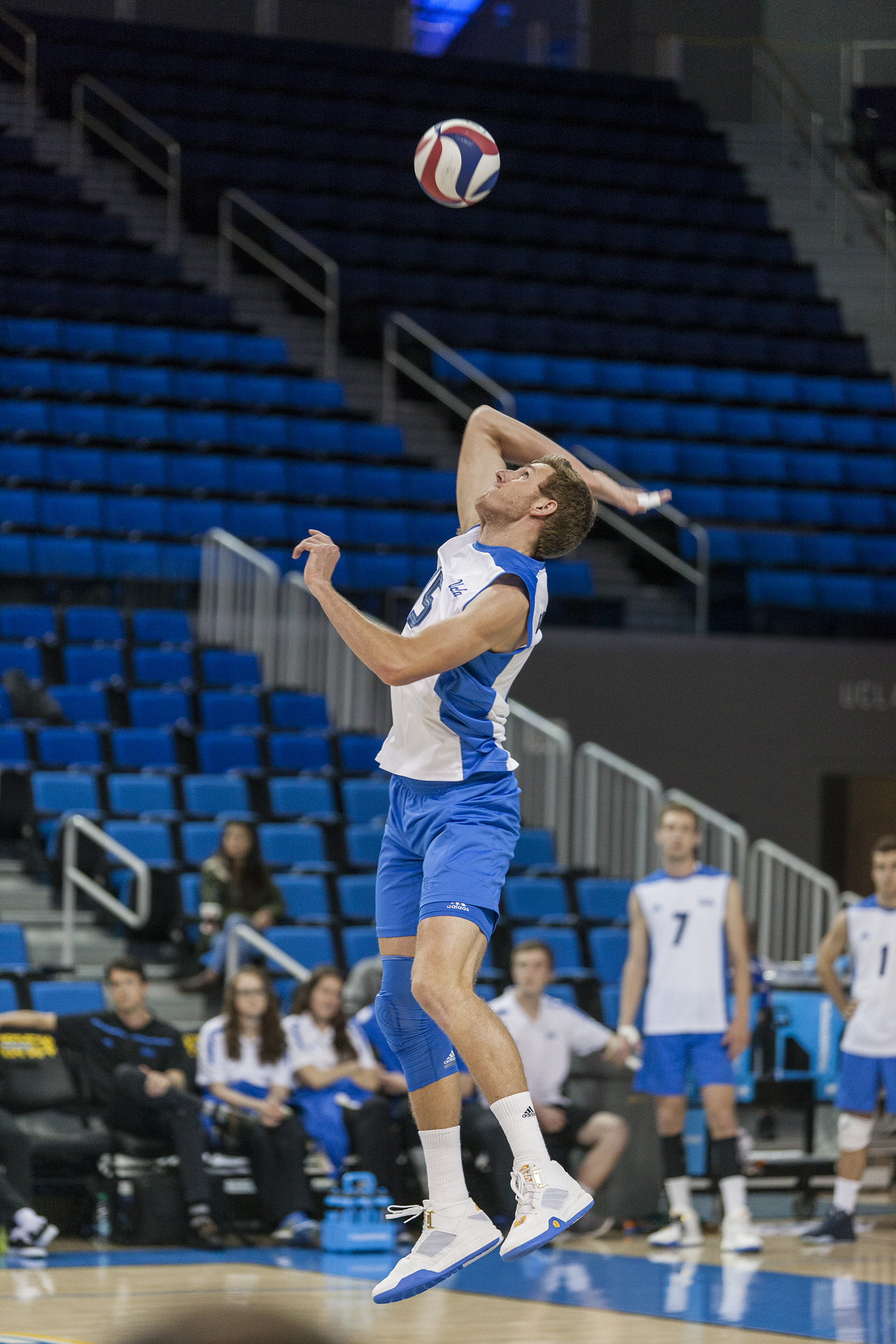 Junior Jake Arnitz finished off the Big Ten/Pac-12 Challenge with only the 16 kills he notched in the Ohio State game. The 6-foot-7 outside hitter got the day off in the first game of the challenge against Penn State. (Daily Bruin file photo)

A series of blistering serves mere seconds into Saturday’s premier collegiate men’s volleyball match sent a clear message: The defending champion Ohio State Buckeyes are not to be underestimated.

From the outset, No. 2 UCLA (2-1) struggled for its footing, overmatched by one of the few teams in the nation that has proven it can handle the Bruins. Powered by junior Nicolas Szerszen, the reigning AVCA Player of the Year, top-ranked Ohio State (2-0) took an early 8-0 lead in the opening set and never looked back, extending its winning streak to 25 matches with the four-set win (25-22, 18-25, 25-21, 25-23).

“(Szerszen) was blasting – he came out on fire,” said coach John Speraw. “When somebody’s going to serve the ball that hard that frequently, it’s going to be a tough night.”

The final match of the Big Ten/Pac-12 Challenge in Columbus, Ohio, offered UCLA a chance at some revenge following its 2016 NCAA semifinal ouster at the hands of Ohio State. Ultimately, it was an early-season reminder of the work that remains to be done.

“We’re coming back with most of our returners, there’s a comfort out there on the court but we’re not ready – that was made known tonight,” said junior outside hitter Jake Arnitz. “This isn’t going to come easy. Ohio State definitely got a lot better since last year.”

Speraw, now in his fifth year at the helm, said his team’s offensive efficiency and overall sharpness was lacking last week after the Bruins’ opening sweep over Loyola-Chicago – normal symptoms early in the season. Saturday, a test of physicality, offered another chance to boost the team’s attack.

“We need to be significantly better in terms of our offense,” Speraw said. “We’ve talked about that aspect of the game early in the season and it’s not there. We had some opportunities and we just didn’t take advantage of those offensively.”

Arnitz paced the Bruins with 16 kills, trailing only Szerszen’s 17, for the match overall. Sophomore outside hitter Dylan Missry contributed eight kills and freshman middle blocker Daenan Gyimah continued his early hot start with five of his own.

Opportunities were limited, though, as the Buckeyes’ blistering serves forced the Bruins out of system.

“Ohio State serves the hell out of the ball – every one of them buries the ball from the line,” Missry said. “I don’t think we did a bad job passing, but we had a tough time getting it into rhythm because we’re used to perfect passes.”

The first three sets were defined by game-changing rallies.

A late surge in the opening set was not enough for UCLA to overcome the 8-point deficit, but the visitors were able to capitalize on a rally of their own in the second set. The Bruins rattled off seven points with Gyimah serving midway through the set, breaking a 14-14 tie and bringing the match even at one set apiece.

But the third set brought a collapse, as the Buckeyes rallied from an 18-14 deficit to win by a comfortable 4-point margin. The day’s final set was more back and forth, and the home team held on to take the match.

UCLA’s loss capped off a week of nonconference play on the road. The Bruins followed up their season-opening victory with a commanding sweep of the No. 13 Penn State Nittany Lions (2-0) on Friday, led by Gyimah and fellow middle blocker Mitch Stahl, a senior. The two combined for 19 of the team’s 34 kills and nine blocks in the win.

The team’s home schedule gets underway next week with a five-match homestand against Mountain Pacific Sports Federation foes. UCLA will host No. 8 UC Irvine Thursday at Pauley Pavilion.

While the Bruins and Buckeyes won’t face each other again in the regular season, Speraw said the early showdown gives UCLA a clearer barometer of where it stands – and where it must go to be a title contender again this year.

“What I want us to take from tonight is that they’re a team that has gotten better faster than we have,” Speraw said. “The distance between the two teams was notable tonight – they’re a better volleyball team.”