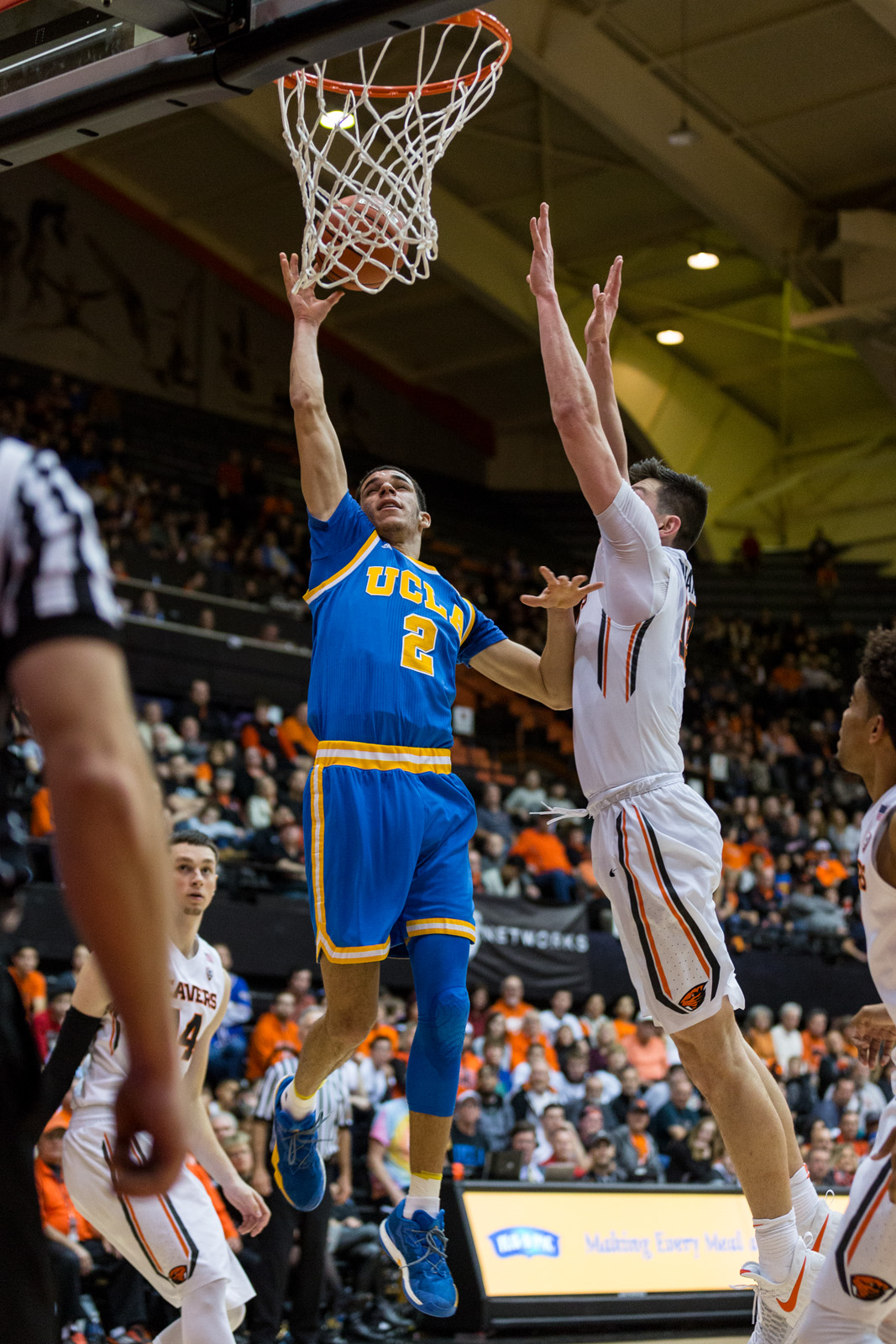 Freshman guard Lonzo Ball had a team-high 23 points to help No. 2 UCLA take down Oregon State on Friday evening. The Bruins’ 76 points is their lowest of the season behind late November’s win over Texas A&M, where they scored 74. (Jintak Han/assistant Photo editor)

CORVALLIS, Ore. – Lonzo Ball went up for the putaway dunk– an easy bucket that would’ve given No. 2 UCLA points to cushion its lead in a tight game on the road against Oregon State.

Yet, they gutted out a 76-63 win behind their improved defense to avoid starting conference play 0-2 for the second straight year.

“Its one of those games where you’re not going to make every shot, but fortunately we picked it up at the end,” Ball said. “But we got the stops when we needed to get them.”

Less than 48 hours after running up and down the floor in a fast-paced game against No. 21 Oregon, UCLA was forced to adjust to the Oregon State’s slower pace at Gill Coliseum.

The Beavers whittled down the shot clock, averaging 21 seconds per possession.

Their 54.4 percent shooting and 57.1 mark from beyond the arc in the second half helped tie the game at 38 with the Bruins looking flustered and discombobulated.

The defense settled in, closing out on the open shooters and contesting shots in what coach Steve Alford cited as an improvement from the conference opener against Oregon.

“A lot of (the improvement) is mentality,” said freshman forward TJ Leaf. “We really have to be more engaged defensively and that’s something we’re starting to learn by the coaches’ telling us and showing us film on it, about how disengaged we are at times. We really have to stay in a stance and stay engaged and we’ll be fine.”

But it was Ball who made big play after big play whenever the Beavers made a run to keep the Bruins ahead of the home team.

Two free throws, a converted dunk and a 3-pointer with six minutes to play in the game from the freshman stretched the lead to 14 for the Bruins despite inconsistent play from the upper classmen.

The point guard hadn’t lost consecutive games in over two years, and finished with 23 points, six rebounds and six assists.

Fellow freshman Leaf had a double-double with 21 points and 10 rebounds, but no other Bruin had more than four baskets.

Senior guard Bryce Alford finished with 12 points, but airballed two of his five attempts from long range. The guard at times had trouble taking care of the ball, finishing with four of the team’s 10 turnovers.

Isaac Hamilton shot 0-for-10 from the field in Friday’s win after making just 1-of-6 in Wednesday’s loss.

The senior guard passed up multiple open shots in the second half, leaving a frustrated coach Steve Alford to yell at him to shoot the ball.

A lot of his attempts rimmed in and out of the basket and one of Hamilton’s near-makes was waved off after Leaf was called for goaltending.

But even with his abysmal week in Oregon, Hamilton’s teammates are ready for his, and their own, bounce back, with upcoming games at Pauley Pavilion against Cal and Stanford.

“Didn’t get the sweep like we wanted to, but we got some good experience just getting that first one out of the way.” Leaf said. “Looking forward to bounce back to these next two at home.”