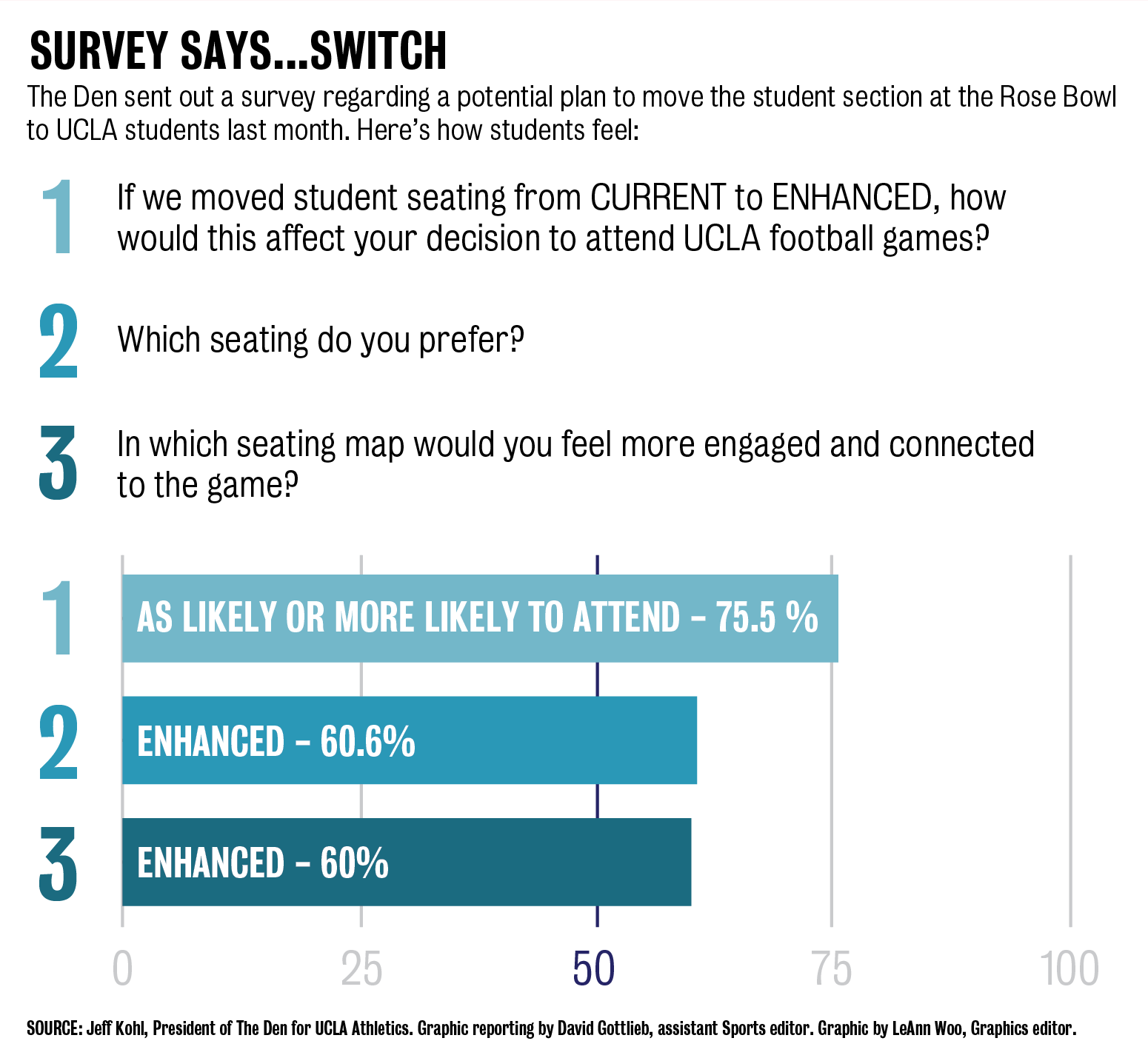 The results are in, and UCLA students seem to largely support a change to their seating arrangements at the Rose Bowl.

The Den, UCLA’s student section, sent out a survey last month to gauge opinion about a potential change that would move the student section out of the sun, while also bringing the home team’s bench into the shade.

Den President Jeff Kohl released information about answers to three of the questions in the four-question survey, which received 1,342 responses.

When asked which seating they preferred between the current and proposed options, 60.6 percent of students chose proposed.

A similar figure of 60 percent chose the proposed seating map over the current one when asked which would make them feel more engaged and connected to the game.

Close to one quarter of students said they’d be less likely to attend a game if the proposed seating change was implemented. The remaining 75.5 percent was split between “more likely to attend” and “no affect,” but Kohl did not respond when asked for clarification on the breakdown between the two.

The Den did not report responses to the first question of the survey, which asked what students think of the current seating.

Moving the UCLA bench to the west side of the Rose Bowl – the shady side – has been a project of football coach Jim Mora’s and UCLA Athletics’ for a while, Kohl said. UCLA cannot move the home sideline without moving the student section due to Pac-12 regulations that prohibit a home student section from sitting behind a visiting sideline.

[Tanner’s Take: It’s time to move the students into the shade]

Athletics proposed the idea of a survey to the Den, who sent an email with a link to the survey to Den Pass holders on Nov. 22.

The Den has handed the results of the survey to Athletics, which Kohl said will take the data into account before making its decision. Kohl said that if Athletics is looking to make the move, it is shooting for 2017 and he assumes the decision would come within a month or so.

Athletics must first evaluate how the move would impact season ticket holders, donors and seating allotments before making a final call, Kohl said.

“It would have been really easy for the Athletics department to say, ‘Yeah, you know, the team wants to move, we’re gonna do this,’ without even gauging any kind of student feedback,” Kohl said. “They want to make sure that the students and the administration are on the same page.”