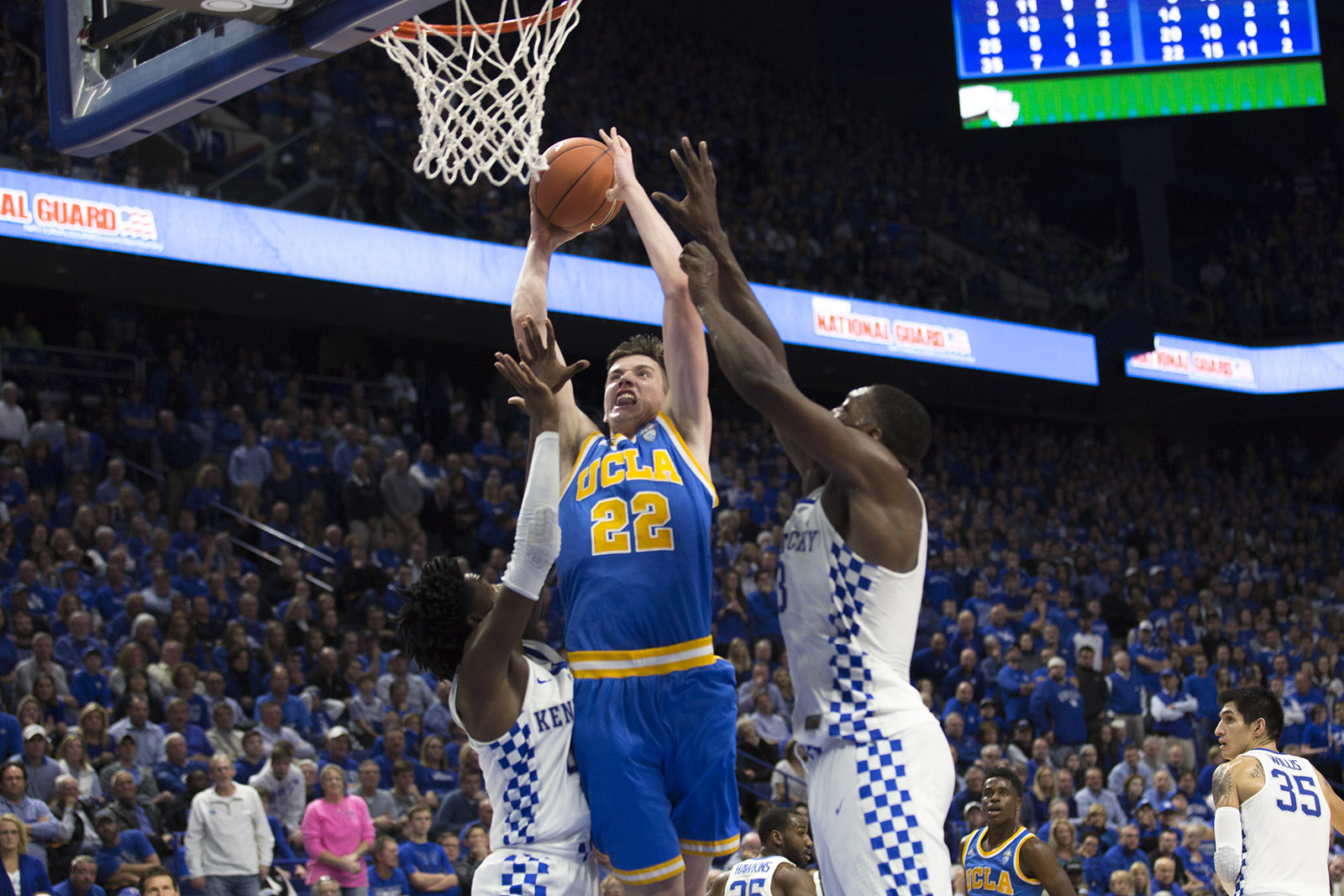 Freshman TJ Leaf finished with a double-double, 17 points and 13 rebounds against the No. 1 team in the country. The Bruins upset the Wildcats for the second straight year to stay undefeated. (Michael Zshornack/Assistant Photo editor)

The No. 11 Bruins (9-0) shocked No. 1 Kentucky (7-1) for the second straight year, this time in Rupp Arena, to win 97-92 behind balanced play from their starters and bench players.

“They manhandled us,” said Kentucky coach John Calipari. “We let them out-battle us. The factor in the game is they played better than us and they played harder than us. They had more fight than we had.”

After slow starts at the Wooden Legacy tournament against Nebraska and Texas A&M, UCLA came out of the gates hot on a 4-0 run, forcing Calipari to call a timeout just a minute into the game.

The Wildcat defense began taking control of the game using bigger and longer players, taking away the Bruins’ easy passes and blocking the path to the basket.

Freshman guard Lonzo Ball, who averages 2.6 turnovers a game, racked up five in first half – on errant passes and mishandled dribbles – to just three assists and three points

The rest of the starters were unable to get into a rhythm with Kentucky on the verge of turning the “Blue Blood” matchup into a blowout.

But down nine with their star freshman scoreless, UCLA didn’t surrender.

“We talked about ‘Don’t go in and jab around the rim and see if you belong,’” said UCLA coach Steve Alford. “‘You’re 8-0. You’re playing well. Trust that you belong.’ And that was key tonight.”

Sophomore guard Aaron Holiday came off the bench to lead all scorers at the end of the first half with 13 points, nailing all four of his field goal attempts.

The Bruins continued to chip away at the lead, before Holiday’s 3-pointer gave the visitors a three-point lead with minutes to go before halftime.

Six different Bruins finished in double digits, led by Hamilton’s 19 points on 7-of-13 shooting, but foul trouble kept the Wildcats within striking distance throughout the second half.

Holiday, Welsh and Anigbogu, who later fouled out, each picked up four fouls before the 10-minute mark and headed to the bench, forcing Alford to send in GG Goloman.

The junior forward combined with Leaf to anchor the paint, totaling 11 rebounds and 11 points, but the Bruins turned to their guard play to protect the lead.

Ball quieted the raucous Rupp Arena crowd multiple times with a dunk and then stealing the ball to hit the 3-point shot moments later to snatch the momentum away from the Wildcats.

“At the end of the day whoever has the most runs win,” Ball said. “This was just finding a way to win and that’s not all me. That’s my teammates too.”

The freshman had just one turnover in the second half while scoring 14 points and tallying seven assists.

A Hamilton 3-pointer pushed the lead to 10 for the Bruins, whose largest lead of the game was 14, but the Wildcats never conceded.

Back and forth it went, with neither team seizing momentum for very long. Behind their full court pressure, Kentucky cut the lead down to three with under 10 seconds remaining, but never got any closer as the visitors hung on for the upset.

Senior guard Bryce Alford sunk two free-throws in the waning seconds to seal the game – and the upset – in front of a stunned, shocked and silent Kentucky crowd.

UCLA’s win ends Kentucky’s 42-straight win streak at Rupp Arena, dating back to February 2014 when they lost to Southeastern Conference foe Arkansas. The Bruins continue their undefeated start and will face Michigan on Saturday at Pauley Pavilion.