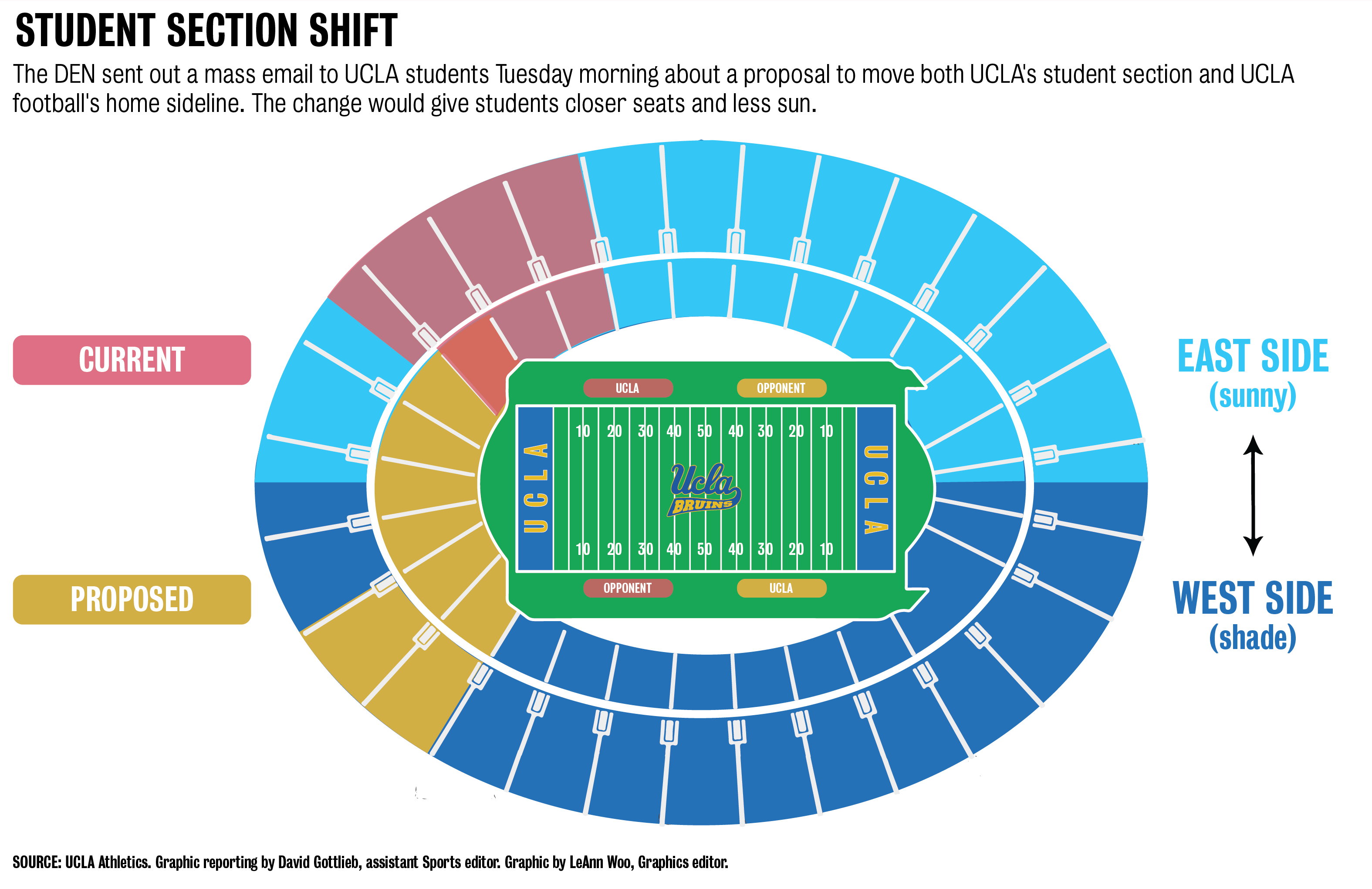 The days of sitting in a sun-baked UCLA student section, longingly looking across at the visiting student section as it enjoys the shade, may be coming to an end.

The Den, the nickname of the student section, sent out a mass email to UCLA students Tuesday morning asking for student feedback on a plan that would move the section to the shadier west side of the Rose Bowl. The new student section would surround the entire edge of the northern end zone instead of just the northeast corner.

The survey in the email is a preliminary stage in what Josh Rebholz, senior associate athletic director of external relations, called a co-initiative between UCLA Athletics and the Den leadership.

“It’s something that we’ve talked about for several years now,” Rebholz said. “We’re trying to win as many games as we can, and the student body is a huge part of that.”

Part of the plan also involves moving UCLA’s home sideline to the west side – also out of the sun – in order to comply with Pac-12 policies that do not allow the home student body to sit behind the visiting team.

[Tanner’s Take: It’s time to move the students into the shade]

Rebholz said that UCLA football coach Jim Mora feels like the change is going to be an advantage for his team.

“He’s been outspoken about student engagement in the past,” Rebholz said. “He continues to understand that at the college level, the student environment is the critical environment for his home field advantage, and he wants the Rose Bowl to be as impactful as possible.”

Early reaction from players has also been positive. Josh Rupprecht, senior associate athletic director of communications, said that players he’s spoken to love the idea of engaging with the student body much more than they used to.

“That (change) sounds good to me – sounds like it will liven it up a little bit,” said junior offensive lineman Markus Boyer. “I think it will be good for us and the students.”

Both the email from the Den and Rebholz mentioned the success of moving student seating in Pauley Pavilion closer to the floor.

Rebholz said UCLA Athletics has put together a list of potential challenges, including the band, the visiting team’s student section and season ticket holders – particularly the ones who have seats behind the current Bruin sideline. But the students are first and foremost their priority, he said.

Another impact of the move would be that the Bruins will no longer be visible on television for all plays since they would be moving to the same sideline as the cameras.

Although the new plan would lead to a lack of visible Bruins on the sideline, it would also greatly increase the presence of UCLA students by the end zone.

“It’s always nice when people score touchdowns and are able to interact with the fans, you know they’re right there in the first row,” said redshirt sophomore wide receiver Brad Sochowski.”It really gets us going and gets the fans going.”

While Rebholz said that he didn’t think a Lambeau leap would be allowed under Pac-12 rules, the ability to engage with students lower to the field and in a congruent, horizontal section lends itself to several possibilities, particularly with pre- and postgame activities.

The deadline to complete the student survey is Nov. 25. Rebholz said that if the students respond favorably, UCLA will start to pursue the next steps of the process such as compromising with season ticket holders and evaluating each party that would be affected by the change.