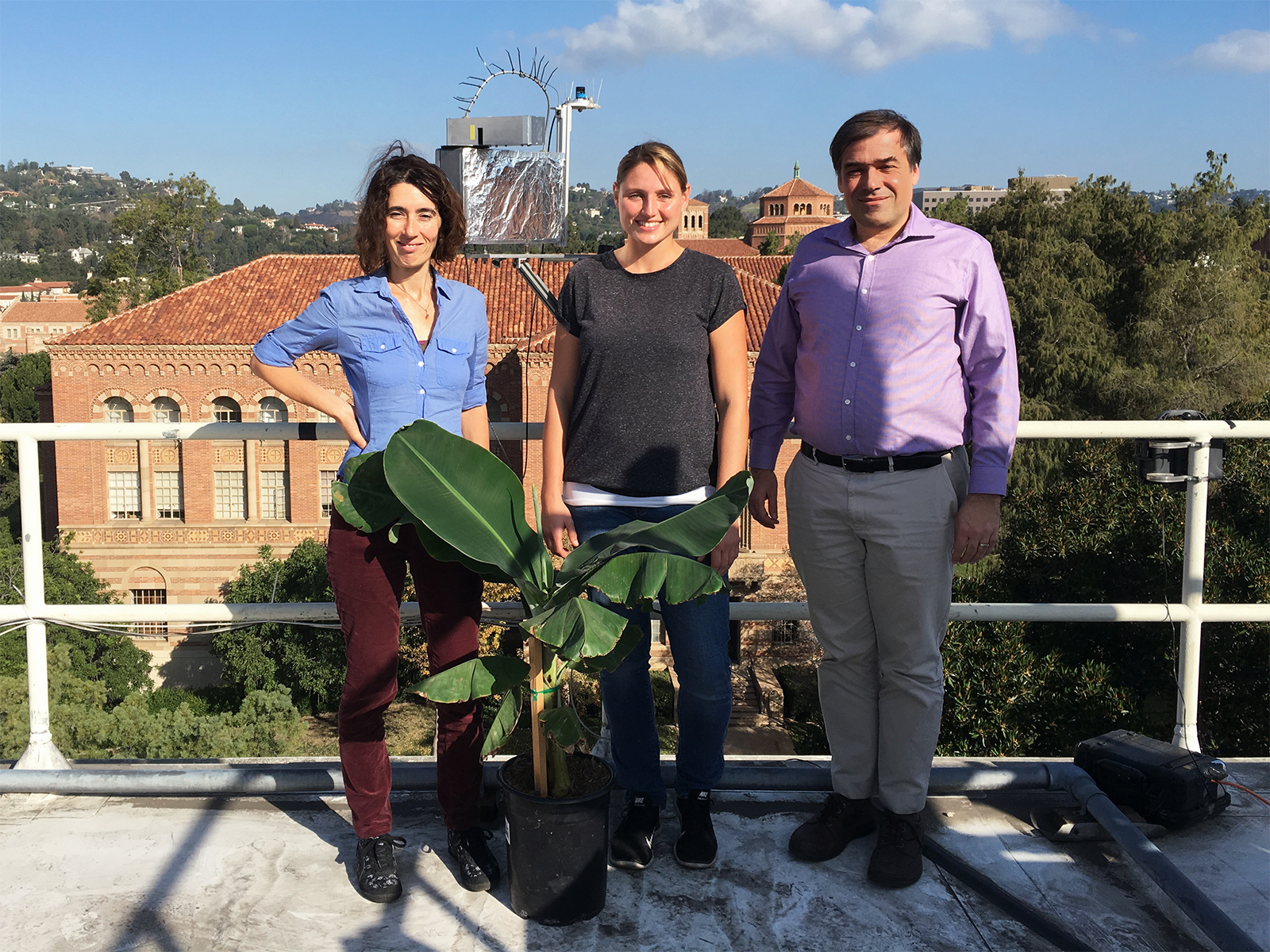 Ulli Seibt, Katja Grossmann and Jochen Stutz conduct their research on the rooftop of the UCLA Mathematical Sciences Building. (Courtesy of Katja Grossmann)

With the help of an instrument the size of a shoe box, UCLA researchers hope to eventually monitor the health of plants over the entire Earth.

In collaboration with NASA’s Jet Propulsion Laboratory, researchers from the UCLA Department of Atmospheric and Oceanic Sciences are measuring the light chlorophyll emits during photosynthesis with an instrument they call a PhotoSpec.

The PhotoSpec is a spectrometer connected to a telescope that can scan an area of land to measure the amount of fluorescence emitted by plants. They installed their instrument in the Santa Monica Mountains at the end of the rainy season in May. It was the first step toward forming a fluorescence monitoring network that could obtain data to compare with carbon dioxide levels.

Plants absorb sunlight during photosynthesis and emit part of that light at a higher wavelength, called fluorescence, said Jochen Stutz, a professor and the chair of the department of atmospheric and oceanic sciences. In general, more photosynthesis produces more fluorescence, which also means the plants are taking in more carbon dioxide.

NASA satellites are currently able to measure fluorescence across the planet.

However, when measuring fluorescence on such a large scale, the relationship between fluorescence and photosynthesis becomes more complex, said Ulli Seibt, an associate professor of atmospheric and oceanic sciences. Scientists need to understand the influence of factors, such as environmental conditions and species of plants, on fluorescence to make sense of the signal detected by satellites.

Stutz added that the satellite data is sparse – the NASA satellite orbits the Earth and will pass over the same area on the ground only several times a day. The UCLA researchers completely automated their instrument to continuously record data on the ground.

“The ultimate goal is to quantify how active plants are and how photosynthesis changes on a global scale,” Stutz said.

Plants remain green for some time even when they get too hot or don’t get enough water, Seibt said. Fluorescence decreases immediately in response to drought, so it can indicate changes in the plant’s activity and physiology earlier than the color of leaves can.

A plants’ fluorescence crashes during a heat wave, and scientists have observed species of plants dying in Southern California, Seibt said. However, the instrument the researchers installed in the Santa Monica Mountains revealed that some California-native trees recovered their regular fluorescence levels the first day weather returned to normal.

The researchers also measured different amounts of fluorescence if the angle between the face of a leaf and the detector changed, which could have incorrectly been interpreted as changing photosynthesis activity, Seibt said.

These details are lost if scientists only consider satellite images of Earth’s fluorescence, Stutz said. Researchers must make careful measurements at the ground level to understand what factors influence fluorescence. Once researchers analyze their data, they will be able to infer the activity and health of plants over the entire planet using NASA’s satellite images.

Scientists in the field have struggled to do this type of research for years because it’s very interdisciplinary, Seibt said. Physicists and chemists face challenges because they aren’t used to working hands-on with living organisms.

Katja Grossmann, a postdoctoral scholar in the UCLA Joint Institute for Regional Earth System Science and Engineering, said she thinks some of the biggest technical challenges when first testing the instrument were birds and weather.

Birds tended to sit on the instrument because it was the highest ground, so Grossmann fashioned a crown of sticks above the instrument for the creatures to land.

Grossmann said it was important to make the instruments resistant to natural obstacles because the researchers plan to install them in different locations, including Costa Rica at the end of this year, and later in Michigan, the Rocky Mountains and Brazil. These sites have different ecosystems with varying temperatures, humidity and species of plants.

Nobody knows exactly what happens in the Amazon rainforest during the rainy season because it’s covered by clouds, Seibt said. The plants get more water but less sunlight, so scientists want to learn more about how the diverse species of plants adjust to these opposing conditions for photosynthesis.

The researchers also want to monitor agriculture with their instrument to see how soil and crops respond to Earth’s environmental changes, such as increased carbon dioxide and decreased water.

“We haven’t been there yet, so we don’t know what’s going to happen,” Seibt said. “The (environmental science) community is eager for this technology.”