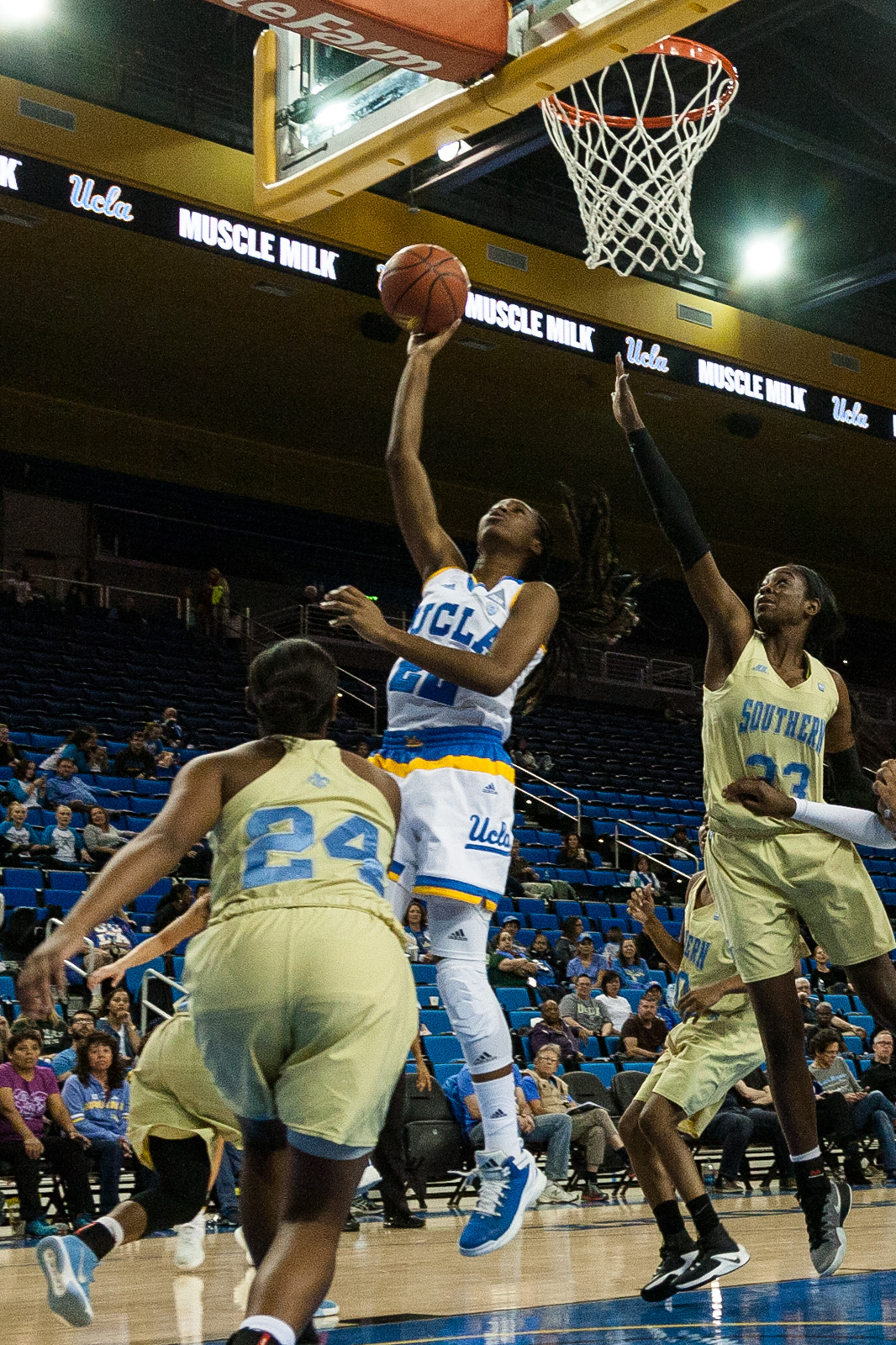 UCLA women’s basketball finished the weekend with a pair of victories over Southern University and Cal Poly.

However, coach Cori Close still saw room for improvement in the team’s energy and defense, feelings she expressed in her postgame comments Sunday.

“I’m not very happy with our performance today,” Close said.

The Bruins managed to hold Southern to a 27.4 shooting percentage and Cal Poly to just 31.9 percent, but Close wants the team to get more consistent stops and rebounds.

“Defensive rebounding, over and over again. We’re lucky that we shoot the ball reasonably well … but (Cal Poly) got 69 shots to our 65. At Baylor they got 73 shots to our 58,” Close said. “You aren’t going to win basketball games when (the opposing team) gets 15 more shots on the goal than we are.”

In UCLA’s three victories, it has out-rebounded their opponents by a total of 58 and has won the rebound category each game. In their one loss, the Bruins were out-rebounded by Baylor 52-25.

There was a noticeable lack of energy underneath the basket Sunday, which led to a handful of easy layups and bad fouls. The Bruins only out-rebounded the Mustangs by five, a surprising figure considering the length and size advantage that UCLA has.

The laziness affects the offense as well. Close continued to emphasize rebounding and running, something she believes her squad has yet to figure out.

“If we get stops and rebounds, we figure that out, we’re going to be able to play at a pace that is going to force rotations on defenses that are almost impossible,” Close said. “That’s why I’m so big with them about controlling the defensive end and the rebounding, because you cannot play the way you want to play without using those advantages.”

The pace that Close eludes to in her comments may also be the key to opening up UCLA’s 3-point game.

The Bruins have been streaky from beyond the arc this season. Against Baylor, UCLA shot 6-9 from three in the first half, but then went 0-7 in the second half. When it returned home to play Southern, the team shot 14-25 from long range, but it followed it up Sunday against Cal Poly with a dreadful 6-34 outing from deep.

Despite the 3-point issues and slower pace, UCLA is averaging 81.8 points per game, considerably higher than last year’s team average of 73.8.

“I guess it’s a good thing we scored 95 points not running the ball, but what we need to do is not just control the pace, but also get defensive rebounds if we want to play that fast,” Close said.

Currently, the Bruins are 3-1. An opportunity against No. 2 Baylor last week slipped away after UCLA took a 48-41 lead into halftime; the Bruins scored just 22 points in the second half and lost the game 84-70.

This week, UCLA will have an opportunity to show improvement in the Cancun Challenge tournament, with games Thursday and Friday against Iowa and Toledo.