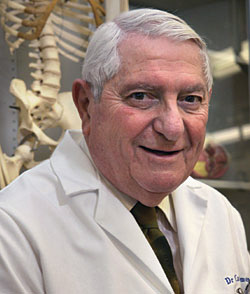 Carmine Clemente, a distinguished professor emeritus of neurobiology, died on Nov. 11 at the age of 88. He taught anatomy at UCLA for the past 52 years. (Courtesy of Jonathan Hiatt)

Carmine Clemente was one of the first UCLA professors in the ’70s to be more than a lecturer. He would prioritize interacting and engaging with students at a time when most professors simply stood in front of their classes to teach.

Clemente, a distinguished professor emeritus of neurobiology, died on Nov. 11 at the age of 88. Clemente’s family members did not disclose the cause of his death.

Robert Trelease, a professor of pathology and laboratory medicine, Clemente’s former student and former Daily Bruin staff, said Clemente was the only professor in the ’70s to give students a typewritten outline of his lecture. Other professors did not give out printed notes at the time because they thought it was spoon-feeding information to students, he said.

“What (Clemente) did was unusual and 20 years ahead of his time,” said Trelease. “In the ’90s with curricular reform, everyone had to measure up to the standards he had been promoting since the ’70s.”

Clemente started teaching at UCLA in 1954 as an instructor of anatomy. He eventually became professor and chair of the anatomy department in 1963. From 1976 to 1988, he served as the director of the Brain Research Institute, an organization that aims to advance research in neuroscience through its outreach programs.

In 1994, he retired from his leadership roles and continued teaching until 2013, according to a written statement by John Mazziotta, vice chancellor of UCLA Health Sciences and chief executive officer of UCLA Health.

“Dr. Clemente’s passing is a loss for UCLA and for the greater neuroscience community,” Mazziotta said in the statement. “His memory should challenge us to strive for excellence in pursuit of the academic mission.”

Some of his greatest contributions include his books on anatomy, such as Anatomy: A Regional Atlas of the Human Body. The 30th edition of Gray’s Anatomy, which Clemente edited and revised, won first prize in the medical book division of the Philadelphia Book Fair in 1986.

The books feature illustrations and information about human anatomy and are used by most American medical students today.

He was also one of the few professors that helped students become comfortable with dissecting human bodies, said Paul Micevych, distinguished professor and chair of the neurobiology department. All medical students have to dissect human bodies during their first year and many felt intimidated by the process, he added.

Trelease said Clemente was soft-spoken and hardly ever raised his voice. However, he was extremely scholarly and methodical, he added.

“I was inspired by his determination and his commitment to getting the facts right and doing it precisely right,” Trelease said. “Seeing him work on his book materials inspired me. I wanted to emulate him.”

Clemente was also a world-class stamp collector and carefully glued stamps onto the pages of his album, making sure they were exactly in order, Trelease said. He added he thinks Clemente took the same meticulous approach with his hobbies as he did with his anatomy research.

“He was a very dedicated and scholarly individual,” Trelease said. “His definition of scholarship meant having his thoughts organized in a responsible, methodical way and being able to convey it to students and relate it to practical things, primarily in the lab.”

Micevych added he will miss Clemente’s ability to see situations in a positive light and to understand what the best way forward is – both in anatomy and in life.

“(Clemente) was passionate about anatomy, about structure,” Micevych said. “He loved teaching people how important and exciting the structure of the human body was, whether that was through his books, lecturing or participating in the dissecting lab with students.”