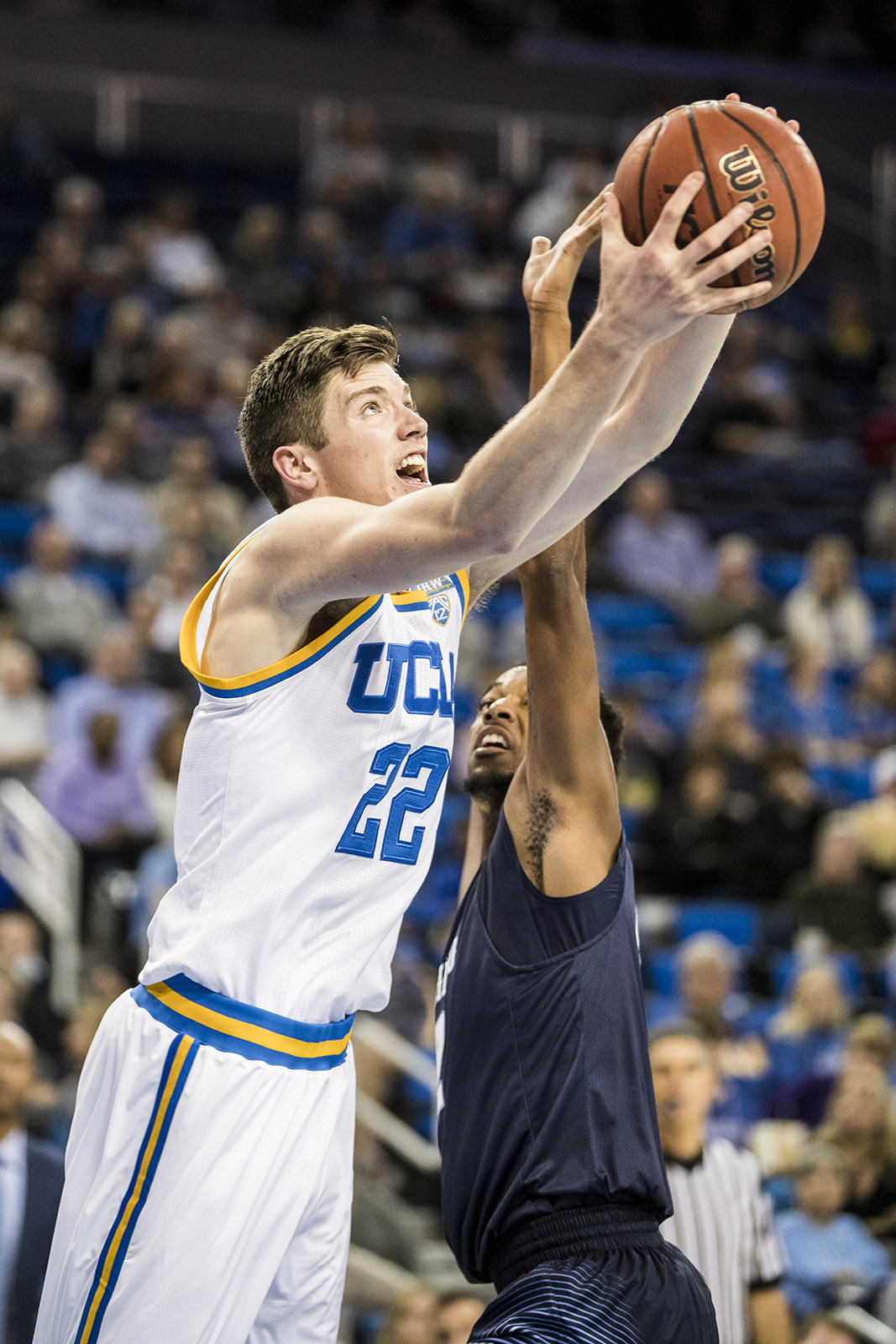 Freshman TJ Leaf’s aggressive play turned the game around for the No. 16 Bruins (3-0). The forward finished with 26 points and 10 rebounds, his second double-double in three games. The big man had 12 of UCLA’s first 17 points in the second half. (Hannah Ye/Daily Bruin senior staff)

While the attention has been all around UCLA’s flashy freshman guard Lonzo Ball to start the season, another freshman has been quietly putting up a strong start to his college campaign.

The forward averaged 17 points and 10.5 rebounds coming into the game against San Diego (0-3), but Thursday night became his grand entrance to the collegiate game. Leaf started the game with a putback after an offensive rebound on UCLA’s first possession and finished with a 26-point, 10-rebound double-double to lead the Bruins to a 88-68 win over the Toreros.

But it was his play to begin the second that really impressed.

Once again, No. 16 UCLA (3-0) started the game slow, but the Bruins found a way to turn it around in the second half behind Leaf’s aggressive play.

“I thought we settled down offensively and did the things we needed to do in the second half,” said coach Steve Alford. “First half, we were just in a rut. I didn’t like our enthusiasm. I didn’t like how we were sharing it.”

Leaf scored 12 of UCLA’s first 17 points to push a 41-33 halftime lead into double-digits. His 12-point scoring barrage came in just over six minutes off four dunks and two layups.

He ended the night shooting 11-of-13 from the field, taking advantage down low against a smaller San Diego team.

“It was part of the game plan, we wanted to give it to them a little bit,” Leaf said. “At halftime, we really wanted to come out and set the tone.”

It was a good thing that the Bruins were able to take control inside with 46 points in the paint because the 3s were just not falling against the Toreros. After shooting 50 percent from behind the arc in its first two games of the season, UCLA came out ice cold.

The Bruins missed their first 12 shots from downtown before finally hitting some late, finishing 5-for-22 from deep.

“It is a mental game, but if you’re a shooter you’re going to just keep shooting,” said sophomore guard Aaron Holiday, who was the only Bruin to hit multiple 3s. “So either way, you’ll be fine as long as you keep shooting.”

On a night that no upperclassman played a particularly strong game, it was the highly-touted freshmen who propelled UCLA to a win. Leaf’s 26 points led the way, and Ball continued to stuff the stat sheet with 13 points, eight assists, seven rebounds, two blocks and a steal in a game-high 38 minutes played.

Many of Ball’s assists led to dunks or layups for Leaf. And Leaf made sure his presence was felt at the rim, reminding everyone that Ball isn’t the only McDonald’s All-American freshman on this Bruin team.