Throwback Thursday: History of the Victory Bell and the UCLA-USC prank war 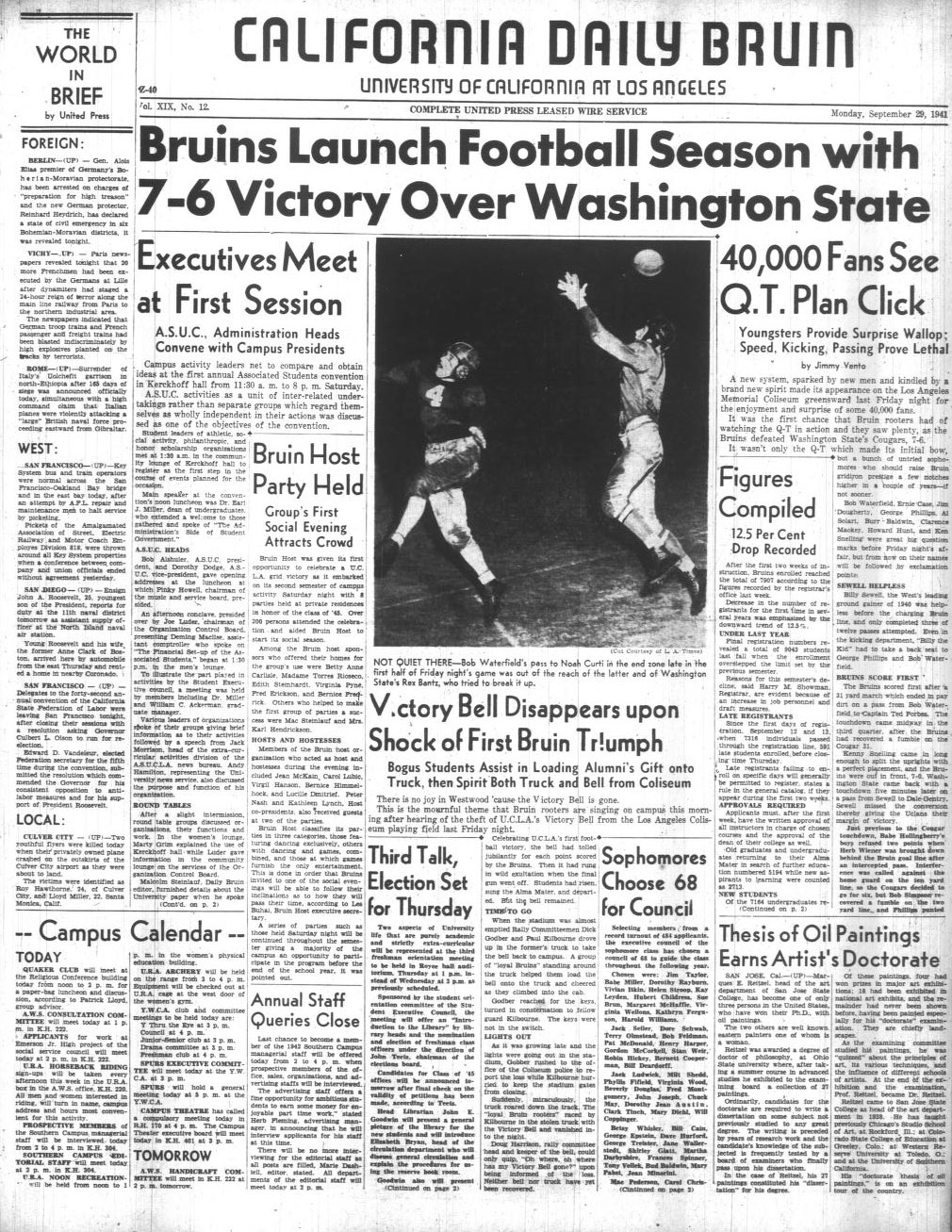 The prank war between UCLA and USC has decreased in intensity over the years. (Daily Bruin archives)

The football game we’ve all been waiting for is finally here.

This Saturday, UCLA will once again take on USC in the annual USC-UCLA football game.

USC and UCLA have had one of the most iconic crosstown rivalries over the years, and when there is a college rivalry, there are bound to be pranks. The prank war between USC and UCLA used to echo our legendary rivalry. However, over time the intensity of the prank war has diminished, to a point where it is almost nonexistent.

Pranks used to be an important and beloved element of this rivalry. In fact, it was a prank played by USC that created the legacy of the revered game that will be the taking place on Saturday, a game that is centered around the possession of a bell that is perhaps more important to us Bruins than the Liberty Bell itself.

The Victory Bell is a magnificent 295-pound piece of brass that, at one time, was part of a Southern Pacific railroad engine. The bell was first presented to UCLA in 1939 by the alumni association.

For a short period, the bell became a prominent feature of every home game. It would be kept in the den and every time the Bruins scored a point, its loud ring would echo along with the Bruin’s ecstatic screams, unorganized eight-claps and broken verses of “Hail to the Hills of Westwood.”

The ringing of the bell was a highlight of every game, a beloved tradition that was disrupted with its theft in 1941.

On Sept. 27, 1941, the Daily Bruin first reported the theft of the bell. UCLA had just won the season opener against Washington State the night before. At the end of the game, as Rally Committee members Dick Godber and Paul Killbourne wheeled the bell to a truck, they found six students waiting there to help them load the heavy bell. However, after helping them load the bell into the truck, the students stole the keys from Godber and drove the truck, with the bell still inside, to an unknown location.

Those six students turned out to be fraternity brothers at USC’s Sigma Phi Epsilon chapter. For an entire year, our Victory Bell resided in various places – moving from the filthy fraternity basement to various locations across the city. At one point the bell was even hidden unceremoniously under a burlap sack.

The theft of the bell and USC’s refusal to return it sparked one of the most eventful prank wars in college history. UCLA launched the first attack on Oct. 2, 1941, when they painted the Tommy Trojan statue blue. USC retaliated in equal measure by burning USC initials onto lawns at UCLA.

This vandalism continued with increased rowdiness, and the police had to be called several times. The pranks escalated to such an extent that in 1942, USC’s president Rufus B. von KleinSmid threatened to cancel the USC-UCLA football game if this vandalism did not stop.

In time, student governments at both schools reached an agreement. It was decided that the bell would go to the winner of the annual game, and if the game were to result in a tie, the winner of the previous year would keep the bell.

On Nov. 12, 1942, student body presidents of both schools, USC’s Bill McKay and UCLA’s Bill Farrer, signed the agreement in front of the Tommy Trojan statue. Later, the USC Alumni Association paid $150 – approximately $2,300 in 2016 – for their share of the bell.

However, in spite of the agreement, the pranks continued to escalate. In 1958, UCLA students carried out a semi-successful prank which involved using a helicopter to dump manure on the Tommy Trojan statue. Another year, UCLA students sneaked into campus and sawed Tommy Trojan’s arm off, rearranging it into a highly suggestive position.

USC has also had its fair share of grand pranks. In 1989, USC released 20,000 cardinal and gold painted crickets into Young Research Library. Even today, dead crickets can be found between the pages of older books.

Nowadays, the statues of Tommy Trojan and the Bruin Bear are the main focus of our rivalry pranks, with the grand pranks of yesteryear a distant memory.

During the weeks leading up to the game, however, both statues are heavily protected by their schools.

Students also get involved in the protection of the statues. The UCLA Rally Committee and its USC counterpart, the Trojan Knights, keep a strict watch around the statues in the week leading up to the game. For them, academics may not be the only reason for all-nighters.

Once, students from both schools would spend weeks strategizing, devoting hours to the construction of a perfect prank. For students now, a “prank” would be to send the pledges of fraternities to get a picture snapped in front of the rival school’s statue.

The manure prank happened 58 years ago. It’s time we pull another good one.