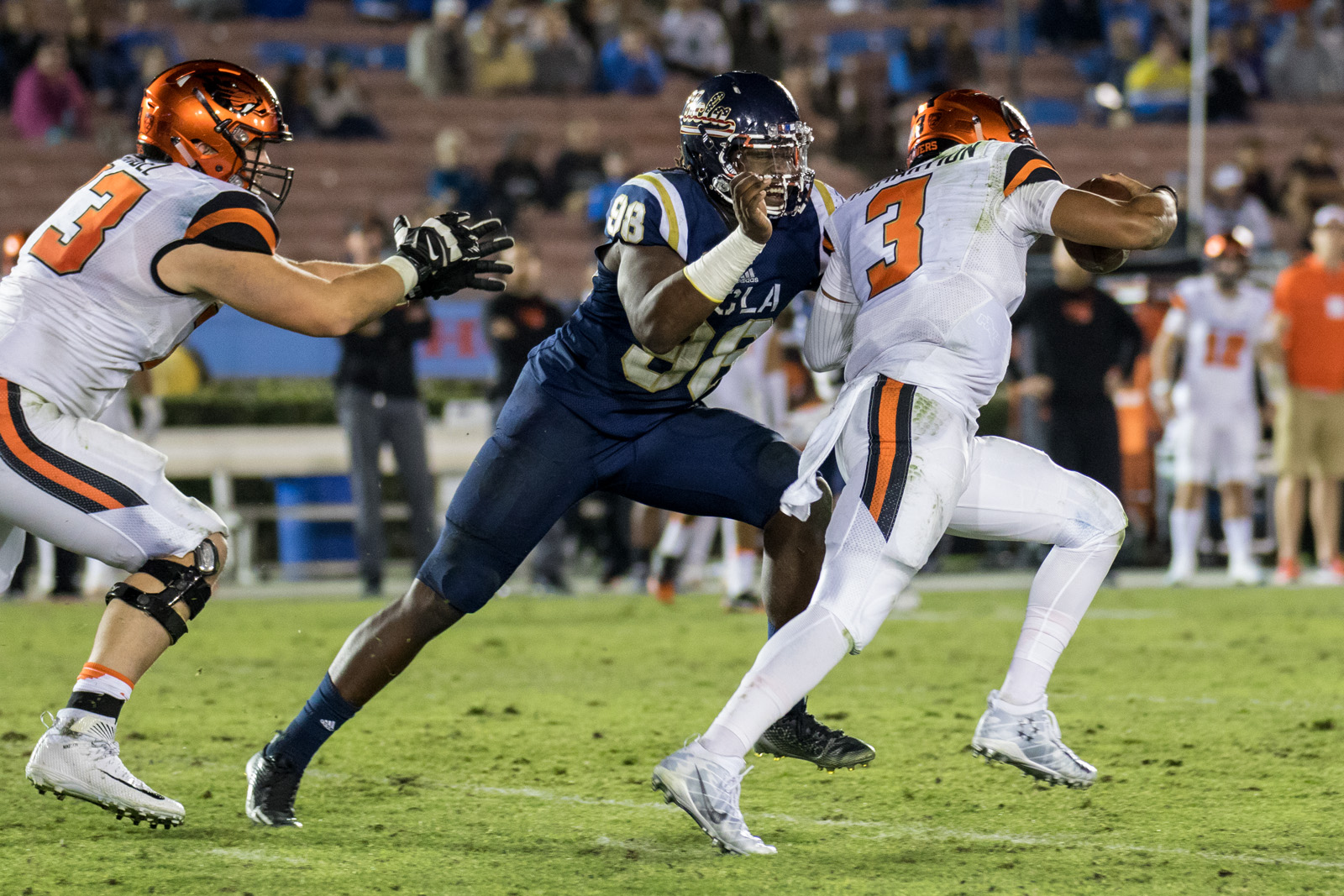 Senior Takkarist McKinley leads the nation with two tackles for loss a game and is second nationally with 1.11 sacks a game. The defensive lineman will be key in containing USC quarterback Sam Darnold this weekend. (Jintak Han/Assistant Photo editor)

USC’s upset win over then-No. 4 Washington in Seattle last weekend was impressive in many ways, but the Trojans’ offensive line play was perhaps the most impressive part of the win.

The Huskies tried just about everything to generate pressure up front against the Trojans, but USC’s offensive line was having none of it. Washington only managed one sack on USC quarterback Sam Darnold, who dropped back to pass more than 35 times. With all that pass protection and time in the pocket, Darnold was able to do what he does best: improvise.

As for USC’s run blocking against Washington: It was steady, but not as impressive as the pass blocking. The Trojans’ lead ball carrier – Ronald Jones II – averaged 4.0 yards per carry on 23 attempts, but didn’t have some of the big holes that he’s become accustomed to seeing behind this stout USC offensive line. On the season, Jones has been arguably the most prolific runner in the Pac-12, with his 6.3 yards per carry average ranking first in the conference among tailbacks with at least 100 carries.

While this season has been a huge disappointment for the Bruins – who entered the season ranked No. 16 in the Associated Press Top 25 – the defensive line has been one of the few units to live up to the preseason hype. Redshirt senior defensive end Takkarist McKinley leads the nation in tackles for loss per game, and redshirt senior defensive lineman Eddie Vanderdoes is projected as a first-round draft pick in 2017.

If UCLA is able to get a consistent and significant push against USC’s offensive line, then the Bruins may have a chance to rattle an inexperienced quarterback in Darnold. A key matchup to watch will be McKinley going against either Zach Banner or Chad Wheeler, both of whom are considered top-20 offensive tackle prospects for 2017.

Ironically, the key to UCLA’s defensive success will actually be UCLA’s offense. If the Bruins’ offense fails to stay on the field and sustain drives against the Trojans’ defense, then the defense will get worn down and thus become less effective.

One final note: Don’t sleep on the matchup between USC junior receiver Juju Smith-Schuster and UCLA redshirt senior cornerback Fabian Moreau. Both are projected to be NFL draft picks come April, and both have had solid seasons in 2016.

Moreau hasn’t followed receivers much this season, remaining solely on the left side of the defense, but he did follow UNLV standout receiver Devonte Boyd in Week 2.

USC’s defense has just gotten better and better this season under first-year defensive coordinator Clancy Pendergast. Through the first four games of the season, the Trojans allowed an average of 29.3 points per game; however, they’ve allowed just 18.0 points on average over their last six games – all of which are wins.

Entering the game, the Huskies led the Pac-12 in rushing offense and yards per carry. But against USC, Washington mustered just 53 yards on 19 carries – and that doesn’t even include the -36 rush yards from Washington quarterback Jake Browning.

Needless to say, USC’s defense is for real. If Washington couldn’t generate any running game versus USC, it’s hard to imagine UCLA will, considering that the Bruins rank last in the Pac-12 in yards per carry.

With USC’s run defense having the clear advantage over UCLA’s run offense, this game will likely come down to redshirt senior quarterback Mike Fafaul. Fafaul will have some chances to go deep against a USC secondary that has allowed some big plays, but he also has to be careful, as the Trojans have a playmaking cornerback in Adoree’ Jackson.

Also, if the Bruins are going to be passing a significant amount – as they should – they will need to beware of rush end Porter Gustin and defensive end Rasheem Green. Green had a sack against Washington last week, and Gustin had two. Both of them rank in the top 15 in the conference in sacks.