Professor accused of sexual harassment to return in winter 2017 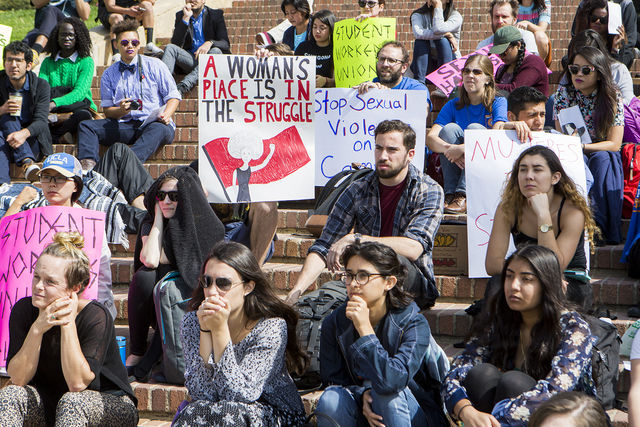 UCLA students are concerned about the school’s decision to allow a professor accused of sexual harassment to teach in winter 2017.

History professor Gabriel Piterberg and Stephen Aron, chair of the history department, agreed in June that Piterberg would resume teaching in winter and spring. Piterberg will teach two upper division history courses – History 105A: “Survey of Middle East, 500 to Present: 500 to 1300” and History 111B: “Topics in Middle Eastern History: Early Modern: Arab Provinces of Ottoman Empire.”

The University of California regents settled lawsuits in September filed by Nefertiti Takla and Kristen Glasgow, both graduate students in history. The students alleged UCLA officials discouraged them from making formal complaints against Piterberg.

The graduate students accused Piterberg of making sexual comments directed toward them and forcing his tongue into their mouths.

In 2014, UCLA suspended Piterberg for a quarter without pay, required him to attend sexual harassment training and removed him as director of UCLA’s Center for Near Eastern Studies. The history department also restricted Piterberg’s access to his office during weekends and prohibited one-on-one meetings with students.

However, some students said they think his punishment was not enough.

“Anyone who has repeatedly sexually harassed and assaulted students should not be allowed to teach at the university,” said Scottie Buehler, member of Bruins Against Sexual Harassment and graduate student in history.

She added she thinks UCLA did not do enough to inform the community about the sexual assault allegations against Piterberg.

“The university failed and continues to fail to protect the community by not informing the students and staff that must interact with a proven perpetrator,” Buehler said.

Jonathan Koch, unit chair for United Auto Workers 2865, the union representing academic student workers, said as far as the union was aware, UCLA did nothing to keep students informed on the situation.

UCLA spokesperson Tod Tamberg, said in an email statement that updates on Piterberg have been made publicly available.

“UCLA has continuously updated our campus community on the Piterberg matter through several other communications and a posting on the (Office of Equity, Diversity and Inclusion) website,” Tamberg said.

Lauren Schaeffer, a head steward of UAW 2865 and a member of the Sexual Harassment and Sexual Violence working group, said her concern lies with those who have had little opportunity to learn about the sexual harrassment claims.

“As far as I can tell, the UCLA administration has done nothing to warn … first-year students, transfer students, prospective students and their families, that a professor disallowed from working with graduate students will be teaching undergraduates,” she said.

Some students said they had not heard directly from the university and relied on social media or other news outlets to glean information about Piterberg’s alleged transgressions and his return to UCLA.

Ruby Basyouni, a fourth-year psychology student, said she heard about Piterberg’s case from the Daily Bruin and thinks the university did not publicize information about the sexual assault claims enough.

Buehler added that she does not think Piterberg’s sexual harassment training was sufficient enough to rehabilitate him, nor was it harsh enough given the nature of the allegations.

“Piterberg was required to attend one sexual harassment training as part of his punishment,” Buehler said. “At the very least he should be required to undergo long-term, extensive psychological counseling and be subject to close monitoring upon return to the campus.”

According to a letter between Aron and Piterberg, Piterberg agreed to hold office hours in Young Research Library with the door open. Piterberg’s agreement to return to teaching also prohibits him from meeting with students one-on-one outside of office hours or off campus.

Zeke Trautenberg, a head steward of UAW 2865, said he thinks these requirements show that UCLA is also concerned about potential future harassment, despite its mandated sexual harassment training.

“The fact he’s still on campus and forced to have office hours like he’s an animal in the zoo shows the university’s lack of faith and trust in him,” he said.

Milagro Escobar, a third-year psychology student, said that while she believes in second chances, she does not think Piterberg should have been granted one due to the nature of the allegations.

Carmen Li, a second-year undeclared student, said she thinks professors should be role models, and Piterberg has failed to be one.

Li added she first learned about the sexual assault claims and Piterberg’s subsequent return through a Facebook post.

Some students took to Facebook to advise others of the accusations against Piterberg and push for a boycott of his classes. However, his History 105A class was completely full as of Monday.

UCLA said in a statement that since the alleged violations, the university has created the Office of Equity, Diversity and Inclusion, hired a new Title IX coordinator, and implemented, with the rest of the University of California, comprehensive new policies and procedures on sexual harassment and sexual violence.

“These changes include establishing peer review committees to review proposed sanctions for any senior leader or faculty member found to have violated the UC Policy on Sexual Violence and Sexual Harassment,” UCLA officials said.