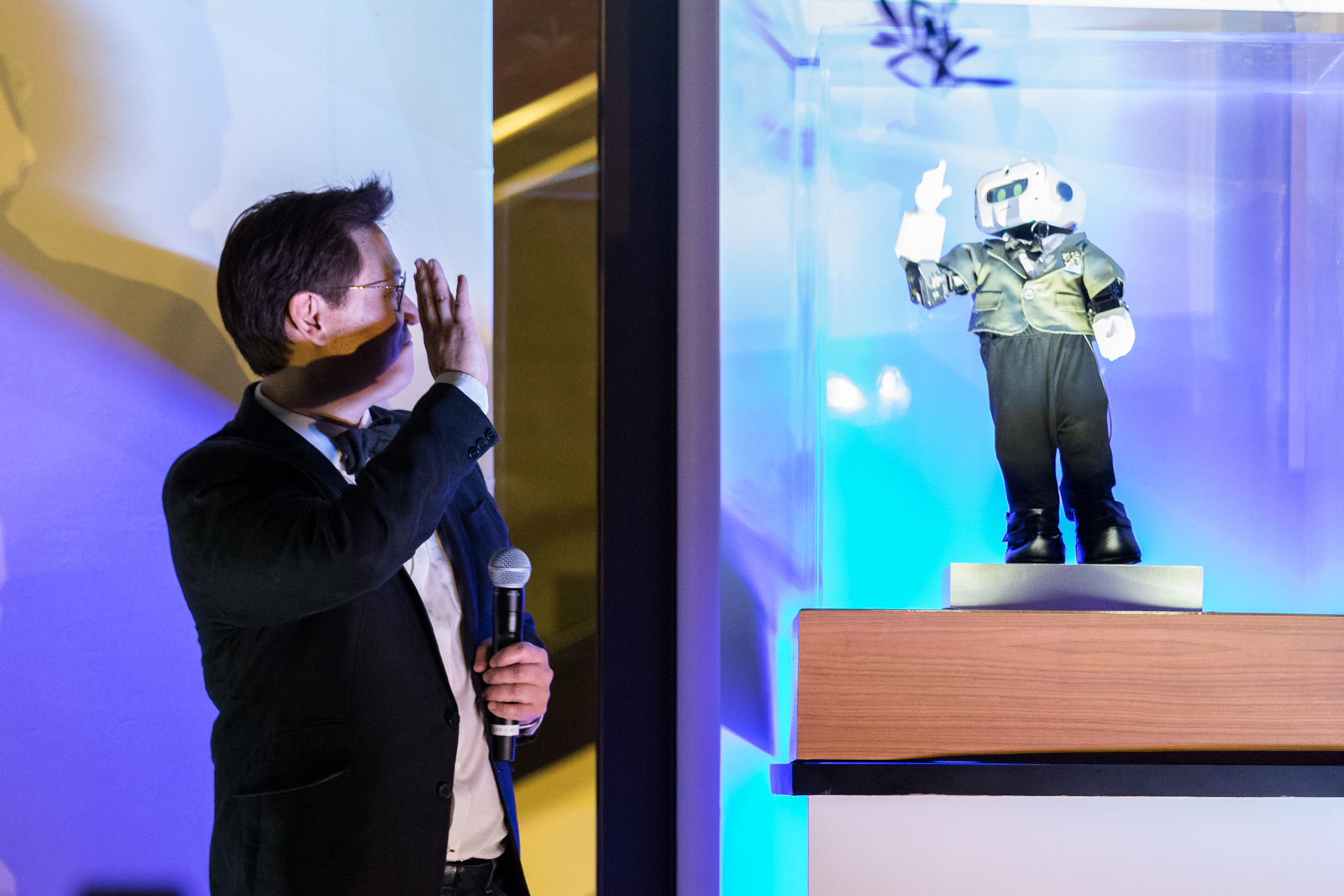 Correction: The original version of this article incorrectly stated the organizers experienced technical difficulties. In fact, the organizers were setting up the microphone.

At less than 2 feet tall, LARA stood dwarfed by its human developers at an event last week. The robot got cold feet before introducing himself to the audience.

Organizers spent some time attempting to set up the presentation, but that did not stop the humanoid robot from performing its duties once the event started. Dressed in a miniature suit, the Luskin Automated Robot Assistant greeted the audience with a cheerful “hello” and an 8-clap.

The Robotics and Mechanisms Laboratory at UCLA introduced LARA, a concierge robot developed for the Meyer and Renee Luskin Conference Center, at a FuturizeX event Wednesday. LARA will be installed in the lobby of the conference center on Dec. 1.

FuturizeX is a initiative that aims to promote technological innovation on campus.

LARA is designed to answer guests’ questions in a friendly, human-like way. Dennis Hong, a mechanical and aerospace engineering professor and founding director of RoMeLa, said LARA is capable of interacting with people through gestures, just as a human concierge would.

Guests can interact and communicate with LARA with their voices and an iPad. LARA can also communicate with the guests through sensors, displays and movement. A camera on LARA recognizes faces and detects when guests are focusing on the robot.

“When you look at what (LARA) will look like a generation from now, it’s kind of awe-inspiring,” Angelis said. “There’s already talk and work being involved with putting guests in outer space. And I wouldn’t be surprised to see robots serve certain capacities at properties where they assist as a concierge robot.”

Hong said LARA’s artificial intelligence can improve itself through experience. LARA has answers to common questions on hand and collects data from its interactions such as booking rooms and recommending eateries for guests. The data will be used to research and refine LARA’s responses.

Alexie Pogue, a graduate student at RoMeLa, is the voice of LARA. Pogue said the RoMeLA team went beyond manipulating motors and software to give the robot a human touch. They tuned the intonation and pronunciation of LARA’s voice to give the robot a cheerful, attentive and intelligent personality.

“What we’re really trying to do is build a character and integrate real character development into this personality that will ultimately be in the Luskin center greeting people,” Pogue said.

RoMeLA began developing LARA two weeks ago in an intensive and condensed project. The short development period prioritized developing interactive features, such as voice interaction, and omitted others, such as bipedal walking.

“Most robots take years (to make),” said Daniel Sun, a graduate student who worked on LARA. “This one was fast because we were using a robot that we already had.”

LARA is based on another successful robotics platform, DARwIn-OP, a member of the DARwIn family of robots created at RoMeLa 12 years ago, which is still being actively developed by researchers around the world.

DARwIn-OP is a miniature humanoid robot that combines computational power, dynamic mobility and complex sensors into a single research platform. All of DARwIn-OP’s designs are available for free, allowing anyone to build the robot and experiment.

“The whole software is new,” Hong said, comparing LARA to DARwIn-OP. “The head is new. The feet, the hands are new. But the basic structure, the mechanical structure is the same.”

Hong said LARA is also a platform for research. By interacting with guests, Hong hopes LARA will collect useful data on human-robot interactions.

Hong and RoMeLa will unveil other robots they are developing at the 2016 International Conference on Humanoid Robots in Cancun, Mexico, which will be held Nov. 15 to 17.