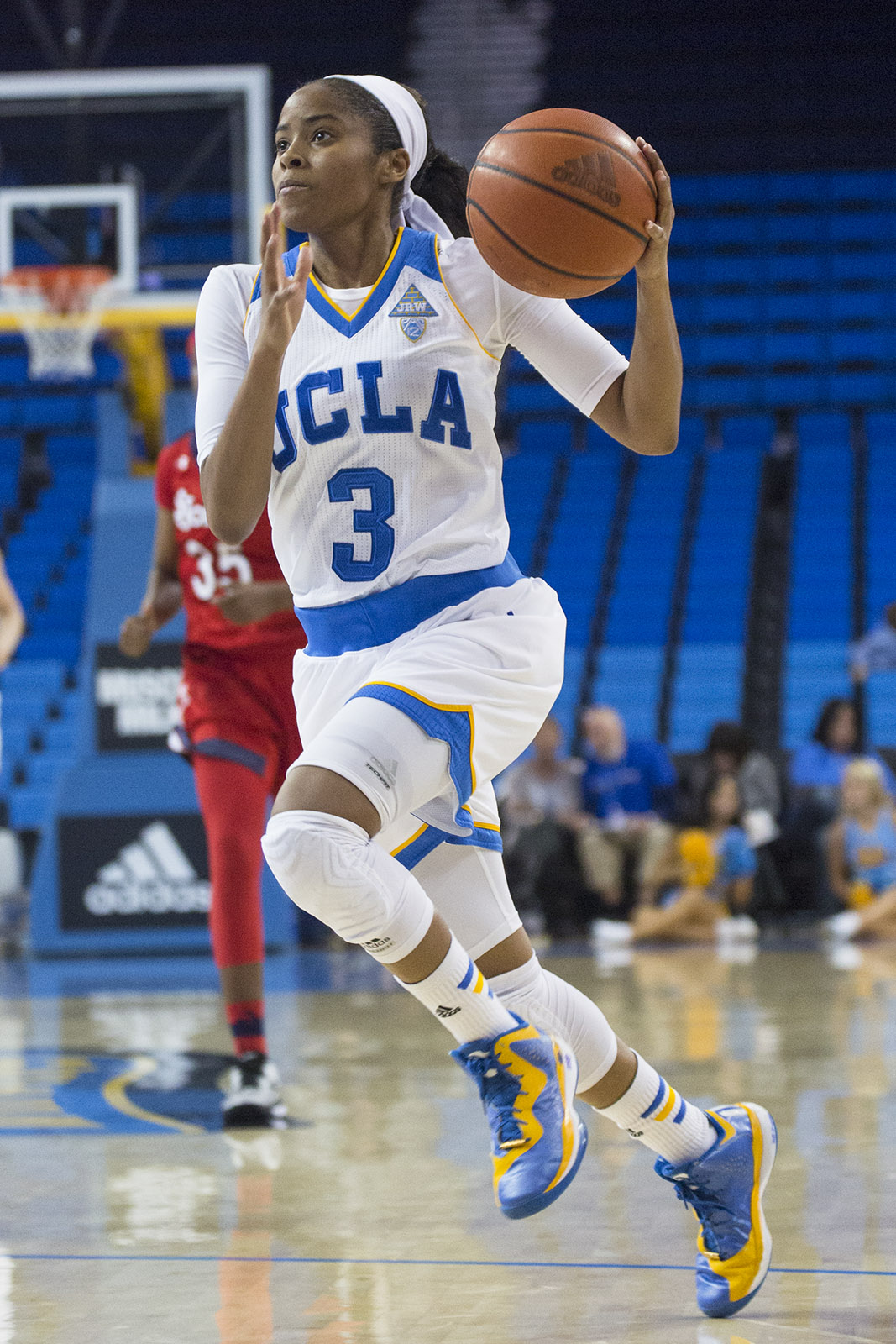 Point guard Jordin Canada is coming off an All-Conference year. Canada finished second in the Pac-12 in assists and averaged 16.1 points per game. The junior has been pegged as the No. 21 player in the country. (Daily Bruin file photo)

After her final game last year, a Sweet 16 loss to Texas, the three-time All-Conference guard graduated after having taken the Bruins farther than they had gone in 16 years.

While the team is now ranked No. 9 in the nation, favored to win the Pac-12 and dealing with the pressure of improving on what had been their most successful season in almost two decades, they’re doing it with a Nirra Fields-sized gap in their roster.

The short answer to this problem? Shoot the ball.

While Fields was a ball-dominant, drive-to-the-basket guard, the team looks to revamp with guards like redshirt senior Nicole Kornet and sophomore Kennedy Burke, who are both known for their range.

This will be in stark contrast to their style last year, where UCLA was second to last in the conference in 3-pointers attempted.

“Shooters make everybody else better on the offensive end,” Close said. “Our ability to stretch people out – it just increases how far everybody has to go on defensive rotations and it’s just a huge advantage.”

While the starting lineup still isn’t set, the open guard spot will likely be filled by Burke, who shot 21 3-pointers last season after having won a national 3-point shooting contest as a senior in high school.

“I think (Fields leaving) caused people to step up,” said junior forward Monique Billings. “Kennedy (Burke), she’s had to step up and she has stepped up, and it’s been incredible to watch.”

The team is also expecting redshirt senior guard Kari Korver, freshman guard Lindsey Corsaro and junior forward Paulina Hersler to help spread the floor. If Close’s goal of eight 3-pointers a game holds, they will have almost doubled their total from last season and will likely be leading the conference, with last season’s leader, Oregon, having made just under eight a game.

Amid all of that shooting will be junior point guard Jordin Canada. Coming off an All-Conference season where she finished second in the Pac-12 in assists, Canada will likely see her passing numbers rise with the spaced-out floor.

“My job as a point guard is being able to put them in position to score as well, and taking on a little more responsibility,” Canada said. “(Fields) leaving allowed other people to … play different positions and put them in places where they can succeed.”

Already ranked by ESPN as the No. 21 player in the country, Canada can expect the added perimeter shooting to positively impact her game.

“She’s got some people to take some pressure off on the offensive end,” Close said. “She can focus a little more on her passing, a little bit more on running the show globally as opposed to putting the team on her back.”

While losing an integral piece of a team is not an uncommon phenomenon in college sports, it’s much less common to do so under their circumstances. The Bruins are expected to win a conference that had three teams in the Elite Eight, two in the Final Four and the Highest RPI in the country.

The roster is deep, the floor will be spread, and Canada will have the ball. It’s not impossible.