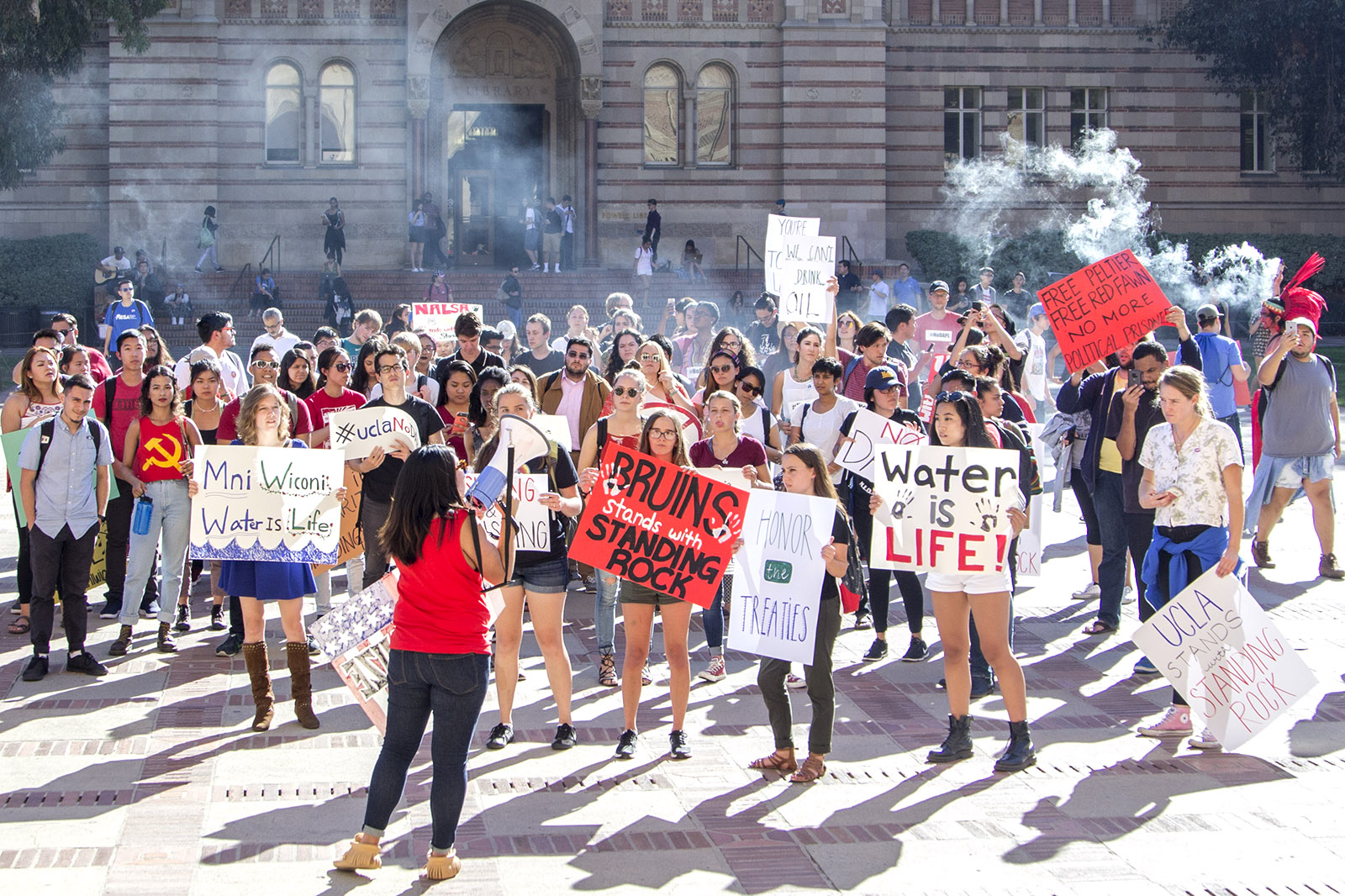 More than 100 UCLA students chanted and waved signs that read, “You can’t drink oil,” and “Water is life,” on Janss Steps on Tuesday.

The American Indian Graduate Students Association held a rally to protest against a gas pipe construction near the Standing Rock reservation in North Dakota, which is home to about 10,000 Sioux tribe members.

The Texas-based company Energy Transfer Partners LP began planning the Dakota Access pipeline’s construction in 2014. The 1,200 mile–long pipeline would run through the Missouri River, which is a principal source of water for the reservation, and through sacred burial grounds.

The Obama administration temporarily stopped construction of the pipeline in September, but the federal court has since allowed it to continue.

“Breaking treaties, taking away country rights – it represents all the problems Indian Americans have dealt with since colonialism,” Baker said.

Mark Villaseñor, a secretary for the Fernandeno Tataviam tribe, performed various rituals at the rally in support of the movement.

To begin the rally, he smoked tobacco, which he said is a purifier to bless and take away the bad in American Indian culture. With each puff, he bowed, raised his hands in the air and hummed while students watched in silence. He then sang traditional Indian songs in honor of the Standing Rock Sioux. One song was about bighorn sheep, which are integral in Sioux culture.

Building the pipeline would violate many federal policies, such as the National Historic Preservation Act and the National Environmental Policy Act, said Sina Bear Eagle, a graduate student in the American Indian studies masters program and an American Indian Graduate Students Association member.

“If we cannot do something as simple a protect the water we drink, what can we do?” Bear Eagle said.

Cesar Barreras, a fourth-year American Indian studies student and president of the American Indian Student Association, gave a speech at the rally and wore a traditional necklace from the Comcaac Nation symbolizing harmony and unity.

In his speech, Barreras said he thinks everyone should stand in support of Standing Rock, regardless of cultural background or geographic distance.

“If we peel off our skin, we’re all the same at the end of the day,” Barreras said. “And we all want what’s best for our future generation.”

Despite the pipe builders’ claims that the pipeline would be safe from leakage, Barreras said the chance the pipe could leak oil and contaminate the water is too risky.

After several speeches, Baker called for students to march to Bruin Plaza to protest and garner attention from nearby students.

“I’m just outraged that native people are still not respected,” said Katia Villanueva , a fourth-year biology student who was protesting. “The government has trespassed our lands and broken treaties for so many years, and it’s still happening.”