New formation powers women’s soccer to an upset win over No. 5 USC 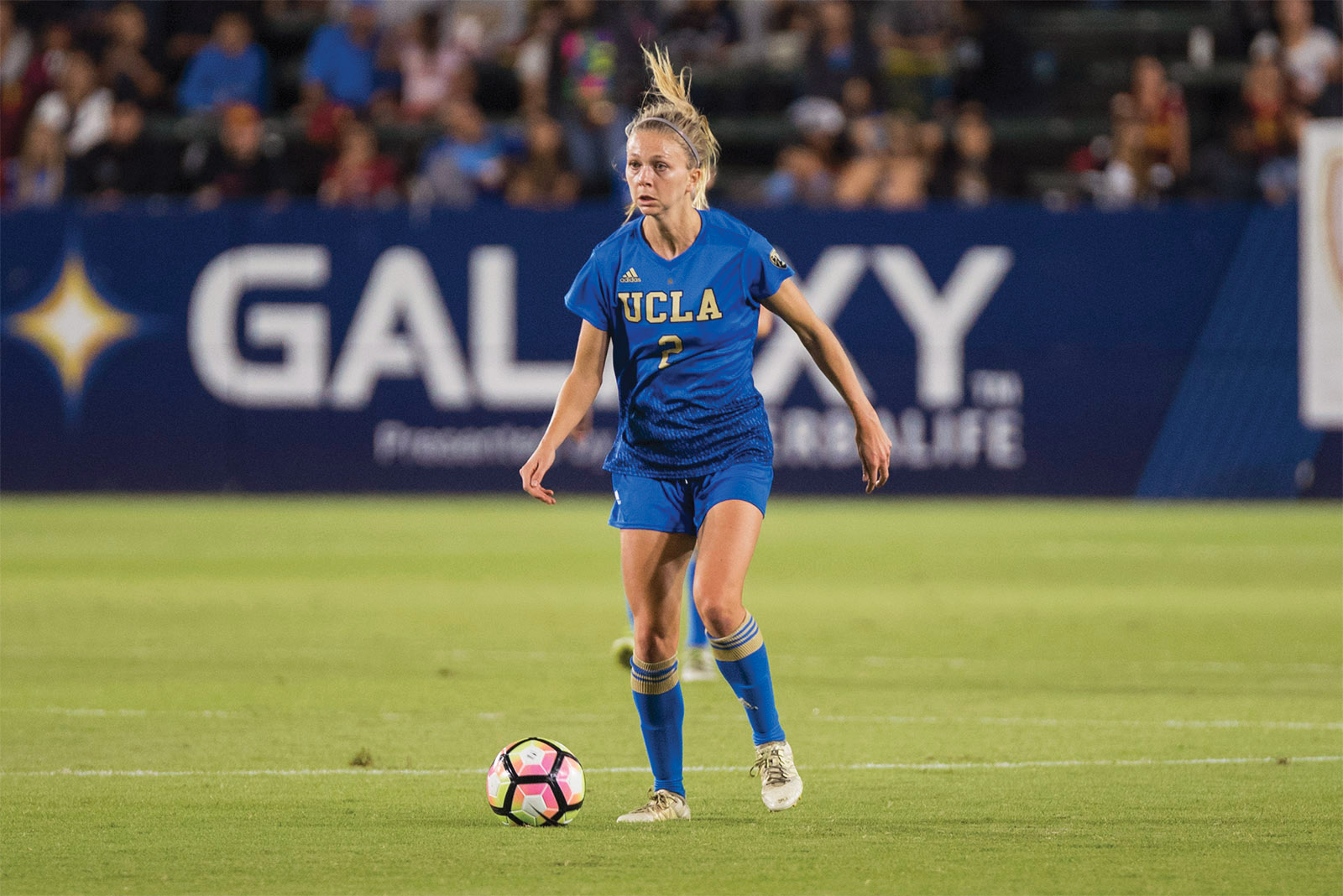 Senior midfielder Annie Alvarado scored the lone goal for No. 18 UCLA in its 1-0 victory over No. 5 USC on Friday night at the Stubhub Center. (Mackenzie Possee/Assistant Photo editor)

When things aren’t going well, sometimes a change is in order.

Even more surprising, perhaps, was the decision to sit senior forwards Courtney Proctor and Amber Munerlyn.

Instead, freshman midfielder Jessie Fleming lined-up in the “false nine” position and freshman forward Sunny Dunphy and junior right back Zoey Goralski were deployed on the wings.

The resulting performance and 1-0 victory Friday night against the Trojans was the product of the new-look lineup.

“The lack of danger and the lack of width in the last couple of games (led to the changes),” said coach Amanda Cromwell. “We just decided to have some natural wingers and Jessie Fleming as a false nine – what better player in the country?”

Early on, the fresh formation allowed UCLA to command the game and pin USC back into its defensive third.

Fleming, in particular, took advantage of the flexibility inherent in the false nine to create two solid chances in the first 10 minutes.

She played redshirt freshman midfielder Anika Rodriguez in on goal with a well-weighted through ball, but the resulting shot rolled tamely out of play.

Minutes later, she teed up senior midfielder Gabbi Miranda on the edge of the box only to see her shot fly into first row of the StubHub Center.

At that point, the wingers Dunphy and Goralski became more active. Dunphy got the better of her defenders throughout the game and repeatedly sent dangerous crosses into the box.

Goralski, on the other side, did the same. It was her ball to the far post in the 27th minute that led to the game’s only goal.

The USC defender, contested by Rodriguez, headed her clearance to the top of the box. Senior midfielder Annie Alvarado charged forward and hit a first-time volley past the fully extended goalkeeper to give UCLA the 1-0 lead.

“We’ve really been working on recreating our width,” Alvarado said. “This one was Goralski getting end-line and getting wide and it led to a chance for me to take it first-time. It was a good finish and a good cross.”

More chances followed, and the Trojans were in danger of being played off the field.

“The way we kept the ball and how we attacked them was hard for USC to defend,” Cromwell said. “They didn’t have an answer in the first half. I think they tried to take their defensive mid and man-mark Fleming at times. Any time you get a team to change something they’re doing it’s a good sign.”

In the second half, however, USC’s dormant attack began to show signs of life.

Midfielder Morgan Andrews sent multiple dangerous balls into the box. One resulted in a looping shot that narrowly went over the bar.

UCLA’s defense had to stand tall in order to maintain the one goal lead.

The two defensive midfielders, Alvarado and Miranda, pushed back to disrupt the Trojans’ movements.

Combined with strong play from the back line, they forced USC to settle for a multitude of shots from 30 to 40 yards out. Most landed safely in freshman goalkeeper Teagan Micah’s hands, while others sailed off target.

“The defense killed it,” Goralski said. “They didn’t let anyone get a shot off. They did a good job of not letting (the forwards) turn. Obviously there were some scary moments, but everyone did their jobs really well.”

On the offensive end, Dunphy streaked forward down the wing to relieve pressure and nearly nabbed an assist and a penalty when Fleming was cut down trying to get on the end of a cross.

“I used to play winger when I was younger,” Dunphy said. “Now, coming back, I’ve found my place on the wing, and I love just being able to run free.”

Munerlyn also came on late and helped close out the game with her ability to hold possession.

In the end, UCLA got a much-needed victory over not only a rival but a top-five team to close out the regular season and head into the NCAA Tournament.

“It’s huge for confidence, especially with the rival and the crosstown cup at stake,” Cromwell said. “We really needed to play well after last weekend. I think the girls responded really well. We hung on a little bit there in the second half and just glad we got the win going into the postseason because it helps confidence and momentum.”