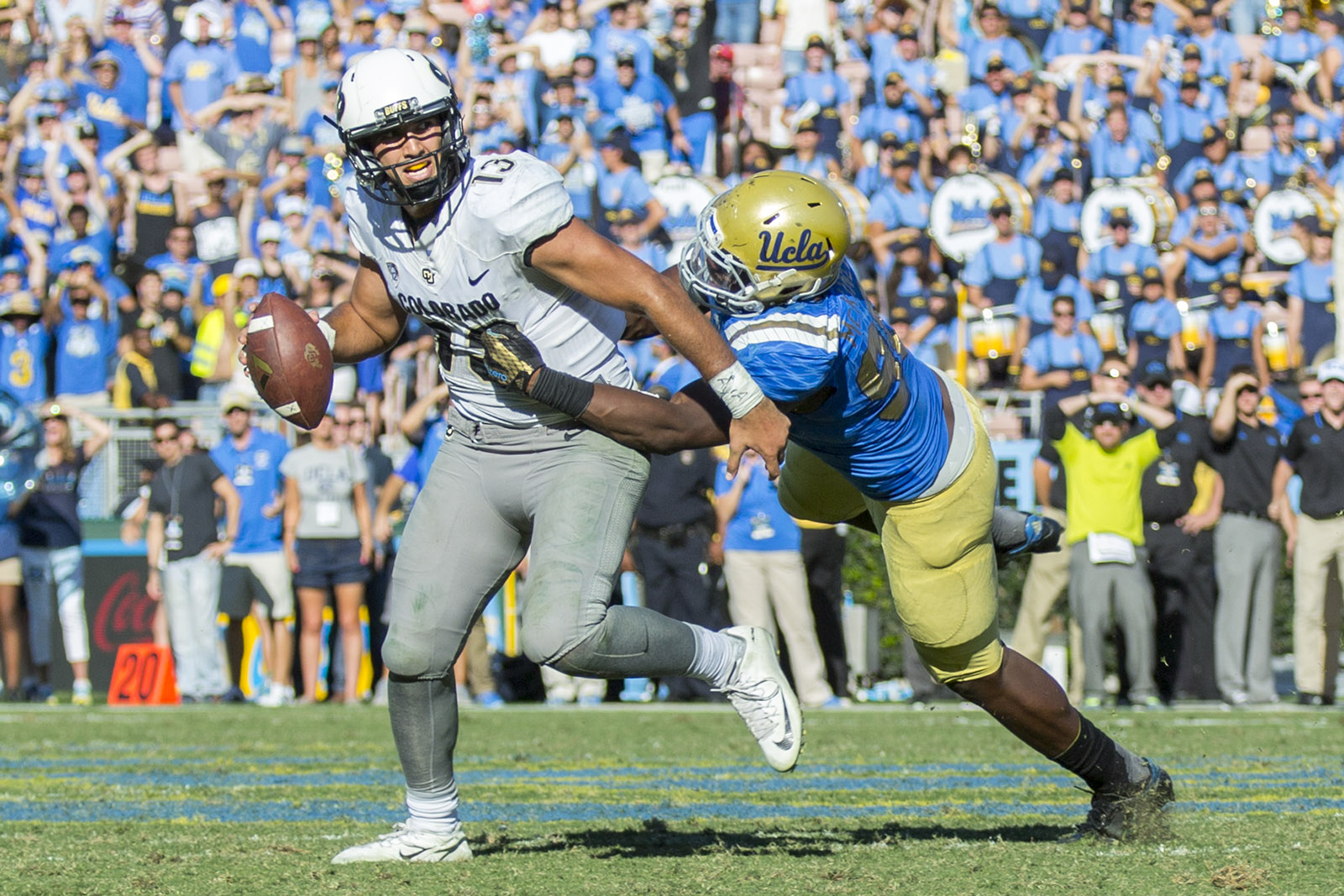 Colorado has returned 17 of its 22 starters from last year’s roster, and, according to UCLA coach Jim Mora, is very “balanced” on both offense and on defense. The Buffaloes are 4-1 in conference. (Daily Bruin file photo)

The Buffaloes were picked to finish dead last in the Pac-12 South in the preseason media poll. Many other news outlets, including ESPN and Sporting News, made the same prediction.

Picking Colorado to finish last in the South seemed to be the logical choice at the time, considering the Buffaloes had finished dead last in the division every year since joining the Pac-12 in 2011.

But if you asked anyone involved in the UCLA football program, they would have probably told you that Colorado was much better than its past record suggested.

“Make no doubt about it, Colorado will be a tough challenge for us,” said defensive coordinator Tom Bradley. “We know that from last season, they’re going to give us some problems, and we’re working through it.”

Last year, Colorado beat UCLA in almost every facet of the game except the scoreboard. The Buffaloes held possession for over 41 of the game’s 60 minutes, gained 154 more yards and gathered 18 more first downs than the Bruins.

If not for an 82-yard touchdown run by then-UCLA running back Paul Perkins, and a 96-yard pick-six by then-redshirt junior cornerback Ishmael Adams, Colorado would have probably beaten UCLA handily in the Rose Bowl. But when you’re a struggling team – like Colorado was last year – it seems you just find ways to lose, even when you’re supposed to win.

This year, Colorado has turned the corner.

The Buffaloes (6-2, 4-1 Pac-12) nearly beat No. 3 Michigan on the road earlier this year, holding a 28-24 lead early in the second half before losing starting quarterback Sefo Liufau.

Heading into Thursday night’s matchup with UCLA (3-5, 1-4 Pac-12), Colorado is in first place in the Pac-12 South, while also holding the No. 15 spot in the College Football Playoff rankings.

Needless to say, Colorado’s potent performance against UCLA last year wasn’t a fluke. It was a sign of things to come.

Colorado’s overall team experience is unparalleled in the Pac-12. This season, the Buffaloes returned 17 of their 22 starters from last year – the most of any Pac-12 team.

The experience seems to have paid off, as many of Colorado’s incumbent starters have taken their game to another level. Quarterback Sefo Liufau – a four-year starter – has seven touchdown passes and no interceptions; running back Phillip Lindsay – a two-year starter – averages 6.2 yards per carry.

Overall, Colorado ranks fifth in the Pac-12 with an average of 5.9 yards per play.

The whole notion of Colorado being a walkover in the Pac-12 is long gone. This time around, UCLA is going to be the team scratching and clawing for an upset win.

“We’re gonna have to fight our tails off to win,” Bradley said.