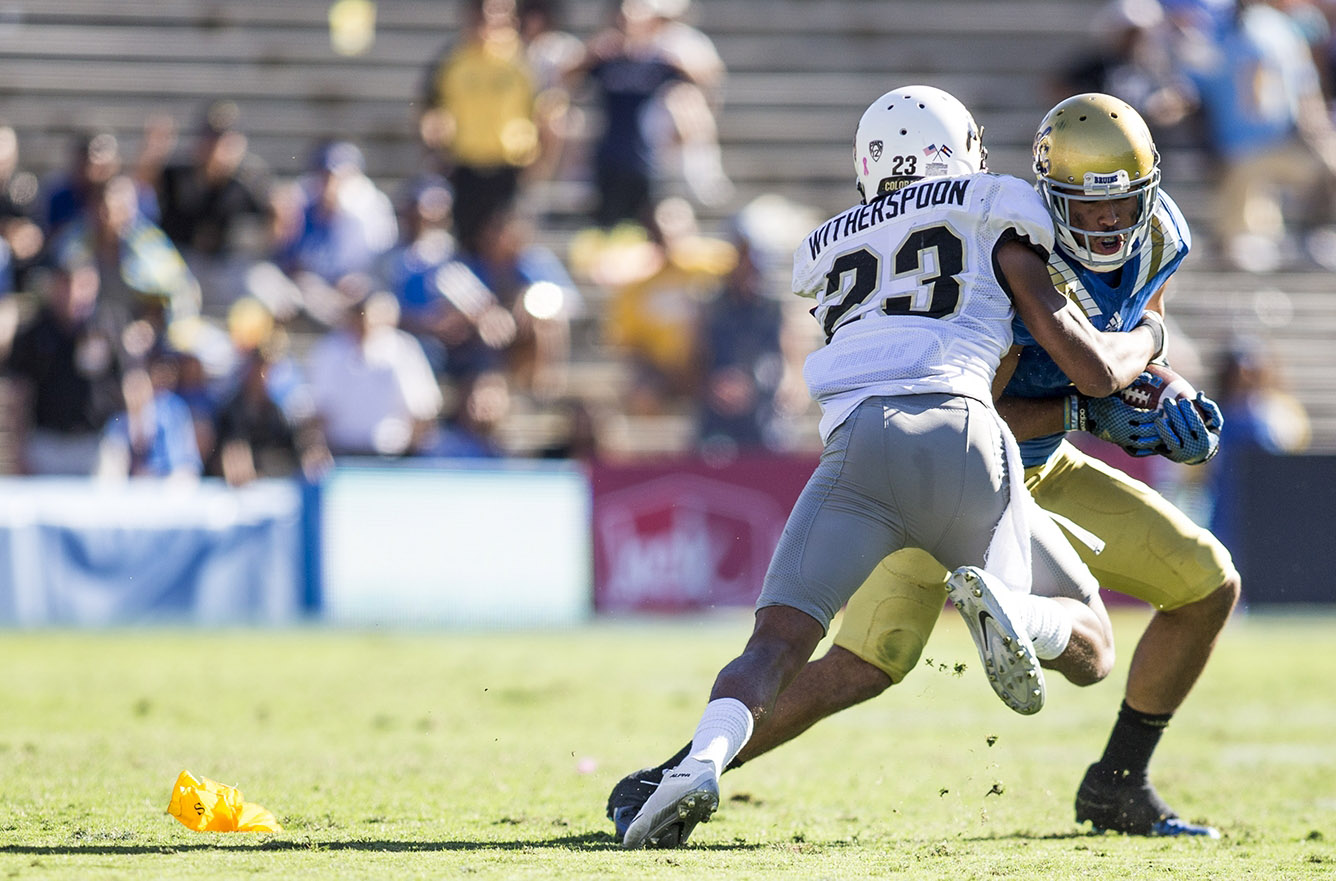 Cornerback Ahkello Witherspoon is part of a Colorado secondary that ranks among the best units in the Football Bowl Subdivision, allowing the second-fewest yards per pass attempt. (Daily Bruin file photo)

Colorado is headed by Mike Macintyre, who is entering his fourth season as head coach. Here’s the scouting report:

The Buffalo offense didn’t miss much of a beat when starting quarterback Sefo Liufau was sidelined, but it helps to have him back.

The senior has helped propel Colorado’s passing game to the seventh-best ranking in the Football Bowl Subdivision, according to Football Outsiders’ S&P+ statistics, by completing 67.4 percent of his throws for an average of 8.7 yards per attempt.

Colorado’s season-long average of 8.57 yards per attempt is good for 15th in the nation and second in the Pac-12.

Part of the reason the passing attack has been so efficient is the way the Buffaloes use the run game to set up the pass. Running back Phillip Lindsay has been dominant this season, averaging 6.26 yards per carry and piling up nine touchdowns.

Lindsay should challenge the Bruin defense’s tackling, as he’s averaging the sixth-most yards after contact per attempt in the nation, according to Pro Football Focus.

Out wide, Colorado has a trio of talented pass-catchers in Devin Ross, Shay Fields and Bryce Bobo.

Ross is a consistent receiver on intermediate routes, while Fields is a shifty playmaker and Bobo is a dangerous option who can go up and get the ball even against tight coverage.

Along the offensive line, left tackle Jeromy Irwin is the Buffaloes’ best lineman, though center Alex Kelley is a fringe pro-prospect and right tackle Sam Kronshage and right guard Tim Lynott have shown flashes of solid play this year.

Even last year, when the Buffaloes went 4-9, their secondary was one of the best in the conference. This season, it’s been a major reason Colorado has ascended to the top of the Pac-12 South.

The pass defense ranks second in the nation in fewest yards allowed per attempt, behind only Michigan.

The Buffaloes have two cornerbacks with likely NFL futures in Chidobe Awuzie and Ahkello Witherspoon and a safety in Tedric Thompson that is making his case for a pro opportunity as well.

Awuzie is the most prized prospect, with several projections tabbing him as a likely Day-Two pick in this spring’s draft. He’s got a tremendous all-around game that includes both stout run defense and excellent coverage skills. The Buffaloes use him both on the outside and in the slot, giving their secondary a good amount of versatility.

On the other side, Witherspoon is formidable as well. At 6-foot-3, he’s got the length to challenge receivers in press coverage, and he’s used it to hold opponents to a rating of just 46.8 when throwing at him this season, according to Pro Football Focus. That’s the 19th-best mark in the nation. He’s also tied for second in the nation with 12 pass breakups.

Over the top, Thompson is a playmaker who’s already snagged four interceptions, including two on Oct. 22 against Stanford, and has earned Pac-12 Team of the Week honors from Pro Football Focus in each of Colorado’s past two outings.

Against the run, the Buffaloes are fairly strong as well, allowing just 3.8 yards per carry and 129.1 yards per game.

The star is Kenneth Olugbode, who averages over eight tackles a game and is currently Pro Football Focus’s sixth-highest graded linebacker in the nation, mostly for his run-stopping ability.

Jimmie Gilbert, who lines up as a 3-4 outside linebacker, is the most productive player in terms of getting into the backfield, having recorded an impressive nine tackles for loss and seven sacks on the year.

Up front, the Buffaloes boast a three-man front that consists of a trio of 300-pound-plus lineman. All of them are seniors, and they’ve been adept at holding their ground at the line of scrimmage and allowing the linebackers to make plays.