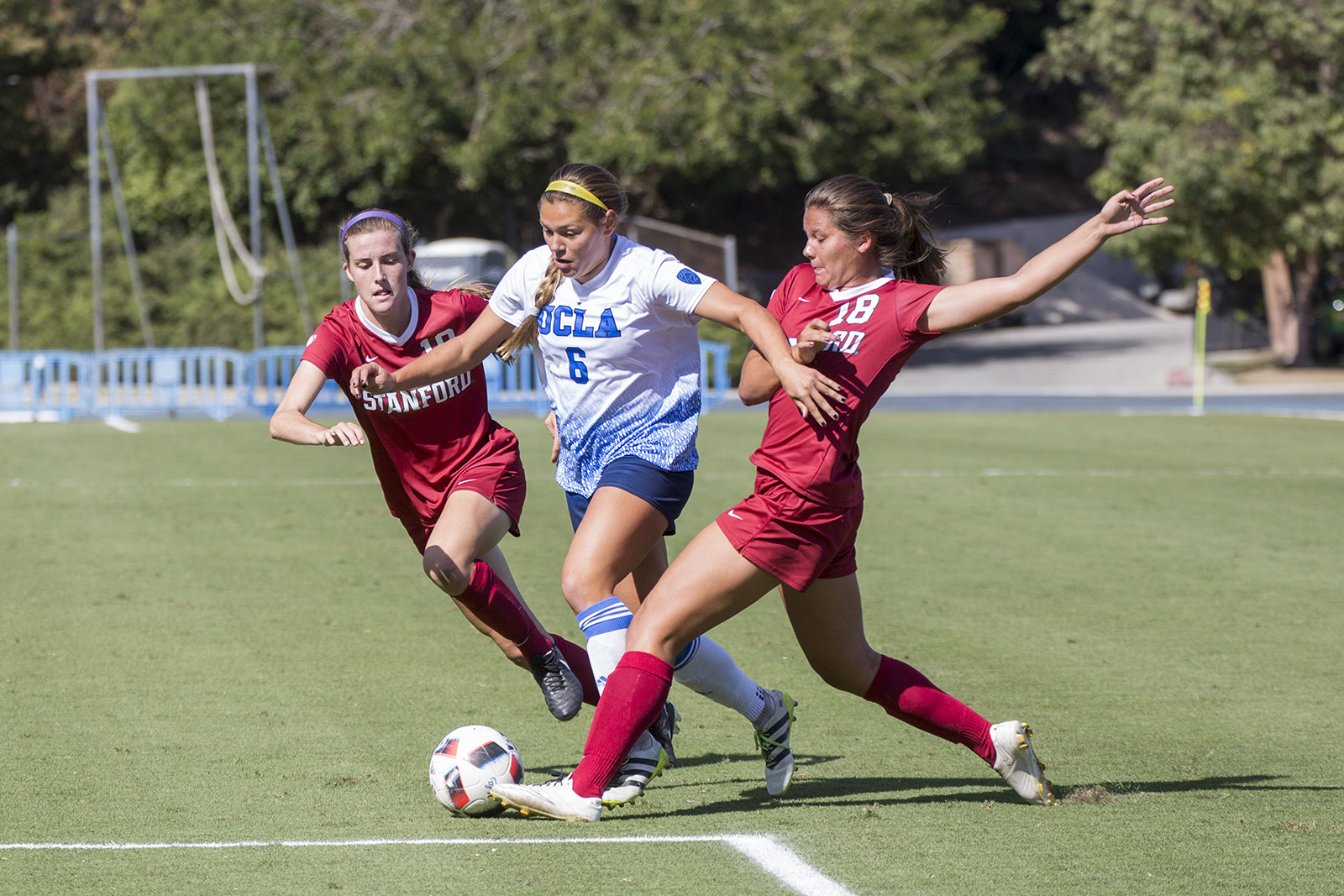 The Bruins were in the race for the Pac-12 championship, but consecutive losses to the Buffs and Utes took them out of the running. UCLA has one conference game left before postseason play starts. (Keila Mayberry/Daily Bruin staff)

After going 9-1-1 in an 11-game midseason stretch, UCLA women’s soccer was flying high.

The first six matches of that stretch were wins, as were the last three.

As a result, the Bruins jumped to No. 9 in the NSCAA rankings.

They looked to build upon their successful run by grabbing two important road victories against No. 22 Colorado and unranked Utah.

UCLA, however, was shut out in both games and recorded two losses.

In the span of a week, the Bruins (12-5-1, 6-3-1 Pac-12) went from Pac-12 title contenders and potential high NCAA Tournament seeds to being eliminated from the conference championship race.

They also dropped nine spots in the national rankings to No. 18.

The outlook, while far from bleak, is not nearly as rosy it had been before the most recent road trip.

On Friday, UCLA faces crosstown rival No. 5 USC at the StubHub Center for a chance to right the ship heading into the NCAA Tournament.

The matchup could have had a little more luster if the Bruins were able to get the results against the Buffaloes and the Utes, but they didn’t.

The team made mistakes on both ends of the pitch, continuing a troubling pattern that emerged near the end of its hot streak. Except then, the Bruins could get away with those mistakes.

This time, they could not.

On multiple occasions throughout the season, usually against teams which bunkered in on defense, coach Amanda Cromwell and the players iterated the importance of getting the ball out wide and getting the outside backs to whip in crosses.

Not having senior forward Darian Jenkins, who could stretch opponents vertically and horizontally with her explosiveness, has made this aspect of the game more difficult because redshirt senior forward Courtney Proctor and freshman forward Sunny Dunphy lack Jenkins’ speed.

Against Colorado, however, UCLA’s attackers repeatedly tried to force their way through the middle of the opposing defense, where there was almost no space to fashion scoring opportunities.

Also, throughout the season, players and coaches mentioned the need to finish the chances they did create.

When they came up against the Utes, the Bruins got themselves in positions to put the ball in the net, but couldn’t capitalize on their opportunities.

At other times, defenders noted that they had made costly errors or didn’t execute properly in certain games, which led to the opposition scoring.

Yet again, this pattern came back to bite UCLA against Utah.

A missed clearance on a corner led to the first goal and a giveaway led to the second.

The key for the Bruins to snatch a successful result against the Trojans, it seems, is breaking out of these patterns.

If they can, their NCAA Tournament picture becomes much brighter.