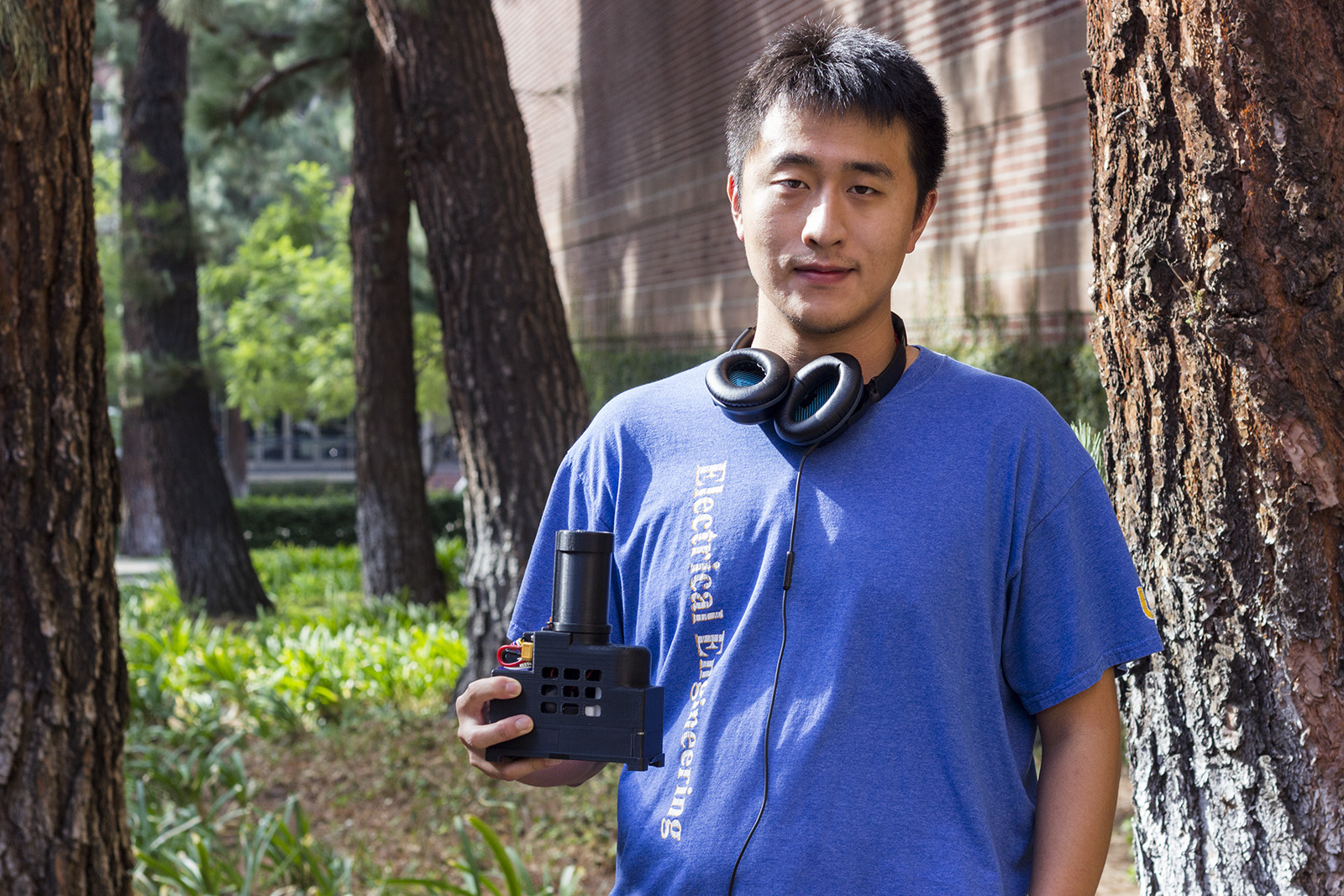 Yichen Wu is a doctoral student in electrical engineering and the primary researcher on the C-Air Project, a particle detector that calculates the amount of pollution in air. (Alyssa Dorn/Daily Bruin)

The Ozcan Research Group designed C-Air, a particle detector capable of sizing pollutants in a sample of air.

“The device has been verified to detect and size particles as small as one micrometer,” said Aydogan Ozcan, the Chancellor’s professor of electrical engineering, professor of bioengineering and associate director of the California NanoSystems Institute.

Most standard air particle detectors require lenses and other optical tools to function, making them too expensive for many pollution detection applications, said Yichen Wu, a doctoral student in electrical engineering and the primary researcher on the C-Air project. He said the Ozcan lab reduced the price of it detector by using a technique called digital holography microscopy. Using this technique, low-cost smartphone image sensors and machine learning algorithms can be used to mimic the effect of lenses computationally, eliminating the need for expensive optics.

Low-cost pollution detectors may play a role in solving health problems in a number of developing countries, Wu said . A recent study by the Organization for Economic Co-operation and Development, a multinational think tank, analyzed the detrimental health effects of air pollution in Africa. According to the study, air pollution leads to roughly 712,000 premature deaths annually in Africa, more than those caused by either childhood malnutrition or unsanitary drinking water.

“Although Los Angeles has come a long way from the Clean Air Act, we continue to experience toxic pollutants, including methane and benzene,” Tran said.

“Our technique will make air pollution detectors much more portable and affordable, while at the same time being highly accurate and could have far reaching public health benefits,” Wu said.

In their method for detecting particles, researchers illuminate an air sample with light and measure the resulting interference pattern, which is essentially the shadow of the air sample, Wu said.

From this interference pattern, a computer can digitally reconstruct an image of the original object and perform algorithms to automatically identify which pollutants the air sample contains.

Because of its lightweight and compact design, the C-Air detector can also be mounted on air drones. Wu said drone-mounted detectors could conveniently monitor long distance pollution fluctuations in three dimensions. The detectors would also be able to track pollution near especially problematic areas, such as factories and major transportation centers.

“Mobile systems on the ground and in air will constitute a smart pollution monitoring network, enabling real-time monitoring of the evolution of pollution and its movement trends,” Ozcan said.

Earlier this year, the Vodaphone Americas Foundation awarded Ozcan’s team the Vodaphone Wireless Innovation Prize, which is given annually to individuals who use wireless technology to address pressing social issues. Ozcan’s team received $200,000 to develop their research project.

C-Air is still in early prototyping stages, but the Ozcan group has been successfully testing the device in Los Angeles.

“We imagine C-Air can be used in many parts of the world eventually, especially in densely populated developing countries like China or India, where air pollution is a huge problem,” Wu said.