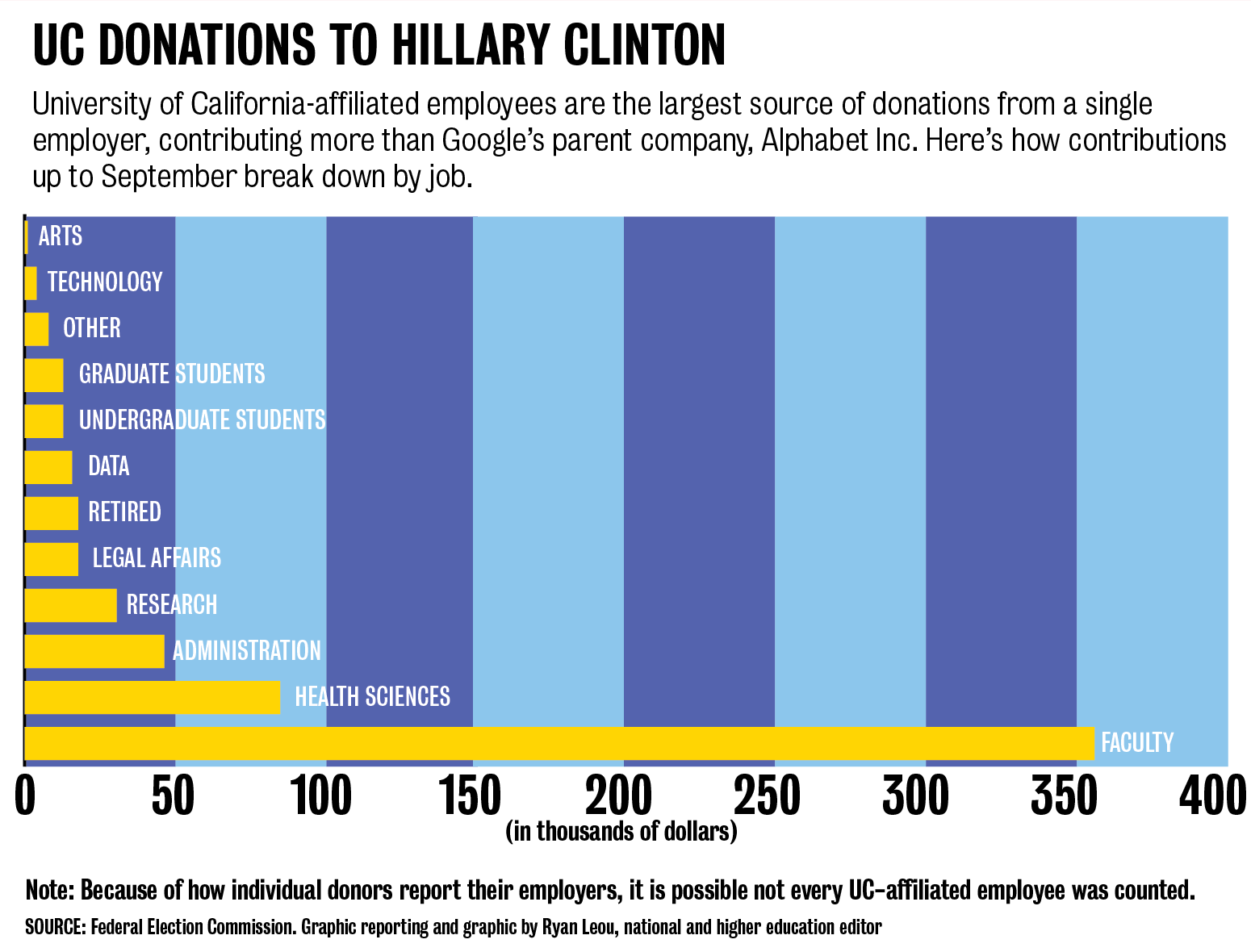 University of California employees and affiliates comprise the largest bloc of donors to Hillary Clinton’s presidential campaign in the 2016 election cycle, according to data from the Federal Election Commission.

According to FEC campaign filings, Clinton’s presidential campaign received about $1.3 million from employees and students within the UC system in 2016. Employees from Google’s parent company, Alphabet Inc., contributed about $50,000 less than UC affiliates.

The UC does not make contributions as a system to political campaigns. UC faculty and staff are prohibited from using their UC emails when engaging in campaign-related activities, according to UC policy.

According to the FEC, contributions from California were Clinton’s largest source of campaign funding in the 2016 cycle. As of Oct. 19, Clinton raised about $84 million from California residents.

Mark Peterson, chair of the public policy department, said in an email that the UC system’s size explains the amount of monetary contributions to the Clinton campaign.

“Individuals in the UC system make contributions that aggregate to a large number and make the UC a seemingly large source, but that is because the UC is a very large multi-campus university system,” Peterson said.

The UC system comprises more than 238,000 students and more than 198,000 faculty and staff across 10 campuses. UCLA, which has the largest student population within the UC system, contributed the most to the Clinton campaign.

[See more: How do presidential campaign contributions at the UC break down?]

Total undergraduate student contributions totaled about $14,000 as of September, according to the FEC.

FEC records also show that faculty members were the largest source of donations within the UC system, with about $360,000 in donations as of September. UC Health employees were the second largest pool of UC contributors, contributing almost $86,000. More than 70 percent of donations from UC sources went to Clinton.

Political science professor John Zaller said in an email that American voters can be understood as small- and medium-sized groups of different backgrounds, often with strong Democratic or Republican leanings.

“Teachers at all levels, including university teachers, are one of the electorate’s medium-sized groups, and the group is strongly Democratic,” Zaller said.

“(It’s) not surprising when the Republican nominee takes positions that so many faculty believe, based on their own extensive research, are false,” Peterson said.