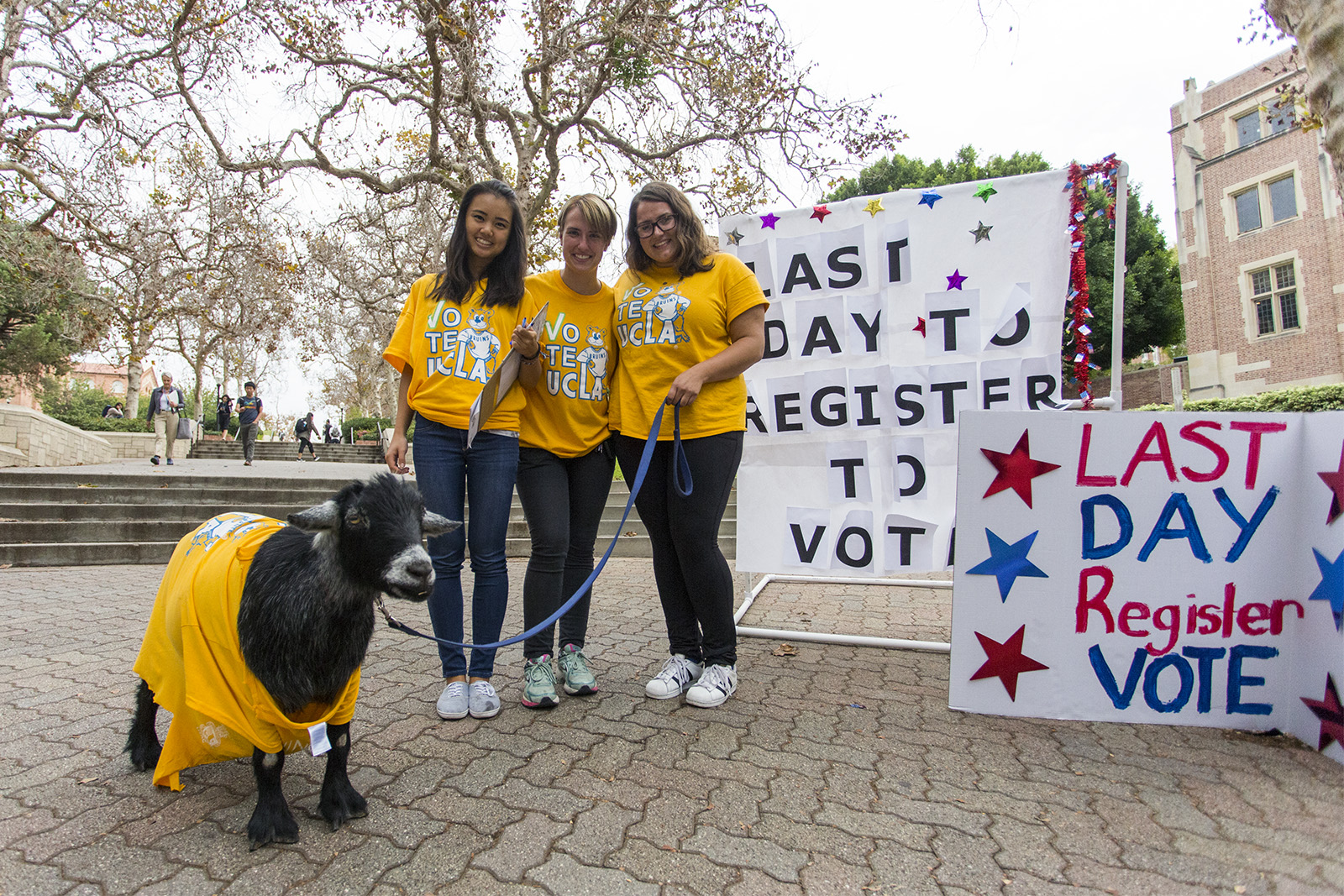 The Los Angeles County Registrar organized the competition in September to encourage both schools to register more students to vote.

UCLA’s BruinsVote! coalition, a group of seven student groups including Vote for Our Future and the undergraduate student government Office of the External Vice President, fell short from its goal to register 15,000 students. USC Undergraduate Student Government and the USC Jesse M. Unruh Institute of Politics aimed to register 2,000.

He said he thinks the registration turnout was significant because many students are dissatisfied with the choice of presidential candidates, which can cause a lack of motivation among voters. But students still signed up, he said.

“Considering the unfavorableness of the presidential candidates this year, it’s even more incredible to break 2008’s record, when Obama had so much hype with young people,” Sands said.

Sands said he thinks student voter turnout is not as significant to USC students.

“I almost feel bad that they registered so few people,” Sands said. “It’s like clear civic engagement and active democracy is not so important to them.”

USC Student Body President Edwin Saucedo said USC held an average of two events per week this quarter. He said USC student groups campaigned in front of dorms and at tables around campus perimeters, but some students they talked to were already registered.

He added the USC student groups focused more on getting students to register in general, and less on whether they registered with their USC address or not.

“If someone wanted to register in Texas, we didn’t need to encourage them to reregister in California,” Saucedo said.

Instead, USC student leaders educated students about whether they need an absentee ballot and how to get one, he added.

He added he thinks BruinsVote! set a good example of unity.

“I think it was amazing, the mobilization efforts we saw from UCLA,” Saucedo said. “In general, we are excited to continue this momentum, but overall we’re just happy that we’ve seen interest in students to register and be part of the political process.”

Yara Hejazi, a director of BruinsVote! and executive director of Vote for Our Future, said he thinks the UCLA student groups were successful in registration efforts because they worked together under BruinsVote! instead of independently.

“Although we didn’t reach our goal, it was definitely a success because we were able to get different groups united under a single goal that benefits UCLA,” Hejazi said.

“If you vote, then policymakers, local politicians and the next president and senators know that you exist,” Hejazi said. “And they’ll keep you in mind when they’re drafting policies.”

Sands said he thinks support from administration, dorm-storming efforts and the fact that BruinsVote! is nonpartisan helped encourage more students to register on campus.

Vote for Our Future will continue its voter registration efforts after election season, focusing on smaller elections that happen throughout the year, Sands said.

Saucedo said he thinks the most important goal from now on will be making sure the students who registered to vote actually show up to vote on Election Day.

Sands said his office hopes to prepare students and maximize turnout on Election Day by educating them about where their polling locations will be, and highlighting information about different candidates and ballot measures on social media.