No. 1 men’s water polo buoyed by defense in close win at No. 2 Cal 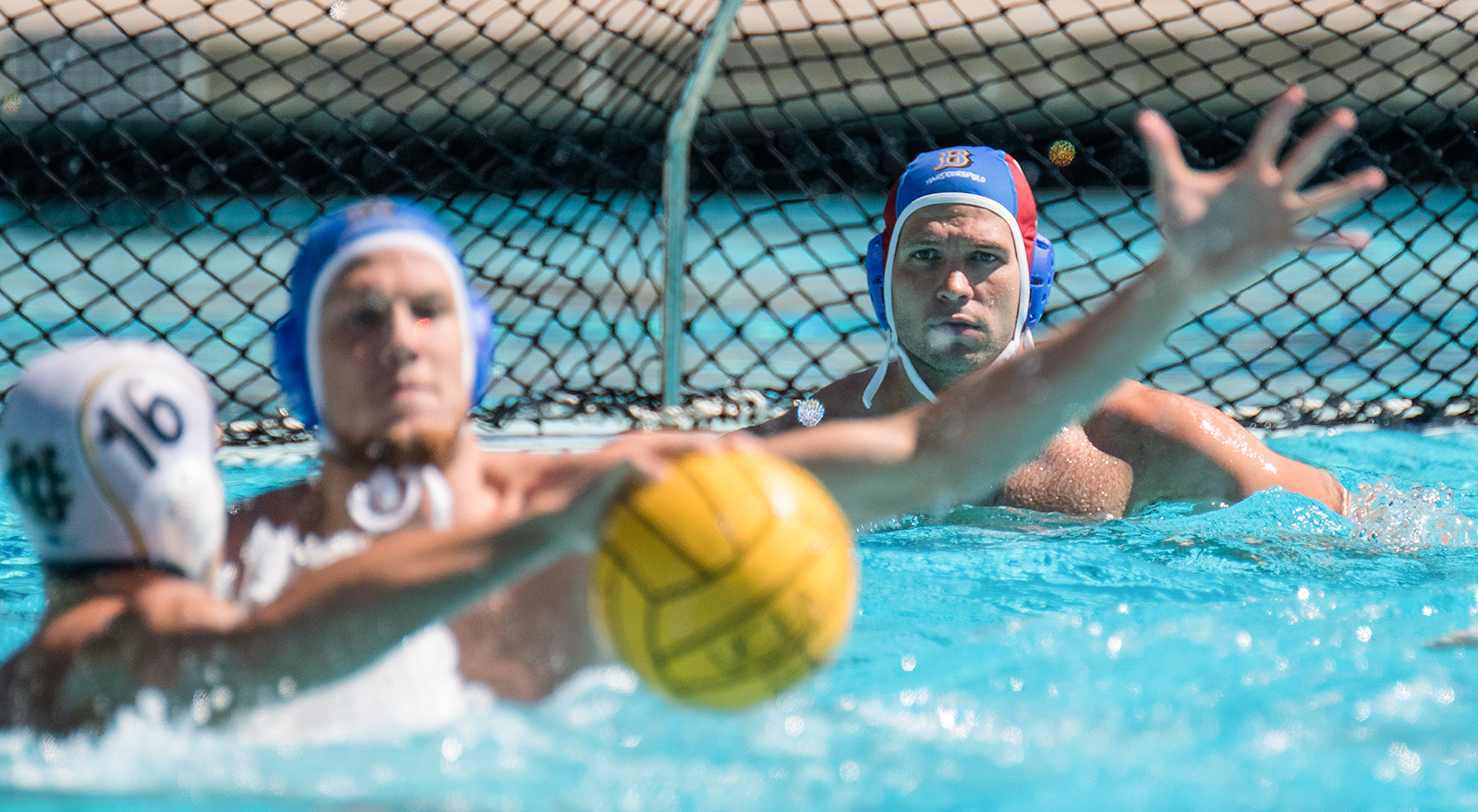 Senior goalie Garrett Danner (right) recorded 11 saves in Saturday’s defense-heavy 7-6 win over No. 2 California. Over the last two seasons, three of the Bruins’ closest victories have been by one goal against the Bears. (Austin Yu/Daily Bruin senior staff)

No. 2 California (14-2, 1-1 Mountain Pacific Sports Federation) has gotten closer than any other team to upending No. 1 UCLA (21-0, 1-0 MPSF) over the Bruins’ streak of now 54 straight victories, and Saturday was no different. UCLA won by one goal in a 7-6 top-team showdown.

Junior utility Alex Roelse led the team with three goals, but the game was all about defense. The Cal Bears pressed the Bruins at half-tank at times, though still crashed well to take away the entry passes into center.

As a result, the team’s outside shooting was the source of its production. Of the five even-strength goals the team had, four of them came from beyond 5 meters.

“In the moments that they did leave us to shoot we were able to step up,” Roelse said. “Since we have a number of good shooters, we were able to put those shots away, even if they were sometimes from distance. But we really also were able to pull their defenders into positions and swing the ball to the other side, which gave us great opportunities to score those goals.”

Roelse’s third was one of those outside goals, his other two coming on a power play from within 2 meters and a 5-meter penalty drawn by junior center Matt Farmer, but it was junior attacker Jack Grover and senior attacker Patrick Fellner’s scores from outside that made the difference in the game.

UCLA led 4-3 at the half and 5-4 after three quarters, but Cal’s Safak Simsek evened the score on the first possession in the fourth. Grover broke the tie when the Bruins were next on offense, and Fellner scored the game-winner with just over two minutes left.

Odysseas Masmanidis converted from center after he received a pass from a counterattacking Johnny Hooper before Fellner’s second goal, one of the few times Cal’s fast-paced game was on display.

“They got a couple opportunities,” said senior goalie Garrett Danner. “I’m not sure if they scored on a full counterattack, we put them in a tough situation by being able to take that away from them.”

Other times, steals from Danner or redshirt junior attacker Max Irving took away the opportunities.

“I like to come out of the cage, but my guys play good defense,” Danner said. “(They) put a lot of pressure on the ball which takes a player’s mind off me, giving me the opportunity to come out and do that.”

Danner totaled 11 saves in addition to his steals.

[Related: In the Cage: Episode III]

Of UCLA’s 54 consecutive victories, three of the close one-goal wins have been between the Bruins and the Bears.

Between the score, the defense and the fans, commentators Adam Krikorian and Kevin Danna predicted the scene would be similar in the national championship game – the two teams included.