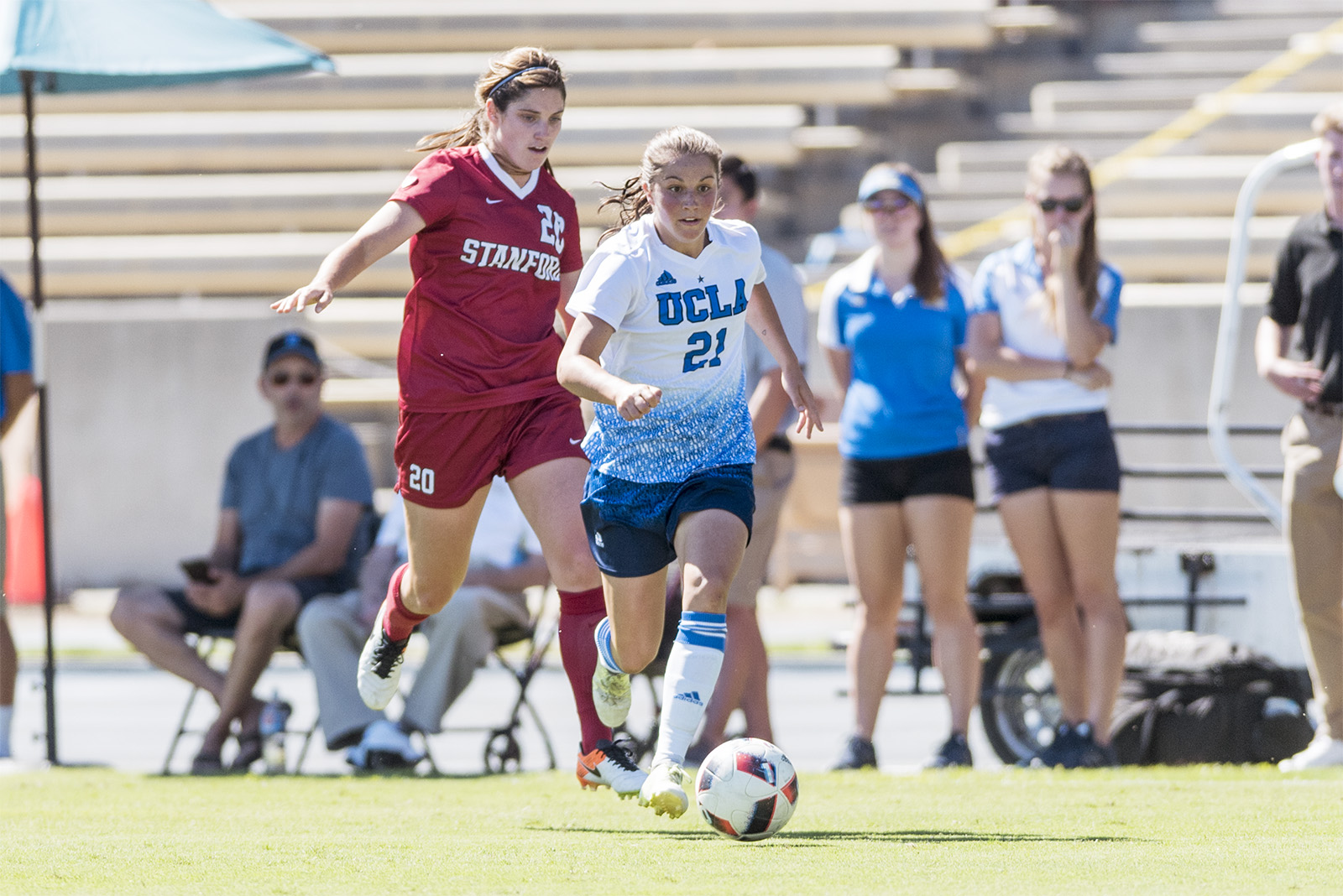 Freshman Jessie Fleming took home a bronze medal with the Canadian nation team at the 2016 Olympics. But the midfielder was also a star cross-country runner before coming to UCLA. (Aubrey Yeo/Daily Bruin senior staff)

At 18, Jessie Fleming – Olympic bronze medalist and breakout freshman for the UCLA women’s soccer team – plays with a veteran’s tactical nous and a youthful cutting edge that still has room for growth.

Her journey, however, didn’t begin on the pitch.

It began on the track and the trails in her London, Ontario, Canada neighborhood where she quietly developed into a top-notch runner like her family members.

“I grew up running a lot of cross-country and track in public school and high school,” Fleming said.

At Ryerson Public School, she won every one of her cross-country races. This victorious trend continued at London Central Secondary School, where she won four Ontario high school championships and broke the provincial record for the 1500m in the midget girls division – a record she still holds.

Fleming’s running background instilled a hardworking mentality that has allowed her to become a menace to the opposition and go the distance in big games.

“Running, because it’s an individual sport, whatever you put into it is exactly what you’re going to get out of it,” Fleming said. “I carried it with me in soccer, knowing however much time I put into my shooting or dribbling or just getting touches on the ball, I was going to get certain results.”

Mentality aside, Fleming’s competitive running experience benefits her as a midfielder in a much more practical way.

The position demands constant tracking back-and-forth across the field for 90 minutes, which takes a toll.

“As a midfield player, having a good engine is very valuable just in terms of getting between the two 18-yard boxes and being effective in defense and attack,” John Fleming said. “Having that good endurance and running background definitely helps.”

Her competitive running days came to an end in 2014.

Her soccer career demanded that she devote more time to it, and she soon switched high schools for a more manageable academic load and online course availability.

Hockey, like nowhere else in North America, boasts a strong influence on the public consciousness in Canada. After all, it’s the country’s national sport.

“Hockey’s obviously huge in Canada. My parents both love hockey,” she said.

In the rink, her instincts had to be sharp. She needed to be on the lookout for threats and avoid being taken out by a body check.

Regardless of the important experience gained from hockey and the provincial medals she won on the track, Fleming’s story always comes back to soccer.

The successes in the other arenas benefited her game directly and indirectly, and her abilities on the pitch indicated that soccer would be her calling.

In the disorganized chaos that is four- and five-year-old soccer, Fleming’s instincts were already working.

“She seemed to figure it out at a pretty young age,” John Fleming said. “When she was four or five, she would be that kid who wouldn’t go into the pack chasing the ball. She’d wait for the ball to pop out.”

Fleming’s skills and awareness grew from this early development.

Pretty soon, she would be marked as a wunderkind.

Her father, who was her first coach, eventually gave way to the coaches of the provincial and youth national teams.

Not long after getting called into the Canada Women’s National U17 Team, coach Bev Priestman named her captain – a reward for her consistent and solid performances.

“When my coach made me the captain, it was a huge confidence booster and mindset shift for me,” Fleming said. “That was a huge step in my development as a person and a player.”

At this point, her rise through the Canadian ranks became meteoric.

After winning the Golden Ball for best player at the 2013 Confederation of North, Central American and Caribbean Association Football Women’s U17 Championship, the budding starlet received her first call-up to the senior national team.

The inclusion in the squad caught Fleming and her family off guard.

“(The first call-up) was pretty unexpected and a little scary,” John Fleming said. “It hadn’t been part of the natural build-up of getting into the women’s team. She was 15. She had to go to Brazil, so it wasn’t a trip mom or dad could make as well. It was an exciting time.”

The 15-year-old was playing with people who were more than twice her age, like Canadian legend Christine Sinclair – a player she refers to as “Sincy.”

She made it to the highest level in the women’s game, but new obstacles emerged alongside her growing expectations.

Between the U17 and U20 World Cups, senior team appearances, the 2015 FIFA Women’s World Cup, the Toronto 2015 Pan-Am Games and the Olympics, Fleming had little time for a break.

“I can’t remember the last one,” her dad joked.

Fortunately, long breaks are not something she needs or even wants.

“When I do need a break, I don’t need a lot of time,” Fleming said. “I just want to get back to playing and training again.”

But when breaks do come her way, she doesn’t waste them.

“When I do get a break, I take advantage of it,” she said. “Last summer, I was able to go up to my cottage for two weeks and it was perfect.”

Unlike most of her teammates, Fleming wasn’t a professional.

She was a high schooler who was balancing games and training while carving out time for homework and college preparation.

“Certainly (she was tired), in getting through all of the academic requirements and writing SATs and ACTs and going through that whole process,” John Fleming said. “It’s been a lot of work, but she’s living her dream at a young age (and) she’s surrounded by great people, so that makes it pretty easy.”

The “biggest struggle” for the teen wasn’t the college applications or the big stage. It was being away from family.

Opportunities to hang out with her brother, Tristan, and sister, Elysse, or to head up to the family cottage were rare – and minimized – necessary sacrifices for her career to truly blossom.

When she returned home to London after the 2016 Rio Olympics – where she started every match in Canada’s bronze-medal finish – it was Tuesday.

That Friday, Fleming left for Los Angeles, where soccer and university life awaited her.

Since then, her integration into the UCLA women’s soccer team has seemed to be virtually seamless. She came in and immediately nabbed a key position.

[Related: Women’s soccer falls to No. 6 Florida in overtime match]

“The Canadian women’s group is a fantastic group of women, (and) the UCLA women are very similar,” John Fleming said. “She just has that immediate comfort and friendship.”

She showcased how dangerous she can be against Florida and has not looked back.

The star midfielder leads the team with eight goals and provides a near-constant threat to the opposing back lines, something she admits is kind of a pleasant surprise.”

Fleming’s goalscoring does not surprise her father, nor does it surprise John Herdman, the Canadian women’s national team coach, who predicted that Fleming would be an important goal threat for the country.

“Her attacking and creativity has shown up in a big way in the last year,” John Fleming said.

UCLA coach Amanda Cromwell was not surprised either.

“I expected her to be successful coming in,” Cromwell said. “She wants the ball. She wants to be a goalscorer. She wants to impact the game. Her desire and competitiveness (are) why she’s at the level she is on the international scene.”

The development of her attacking side fits right in with the players she considers her role models – Andres Iniesta and Philippe Coutinho.

Iniesta is one of the most perfectly direct midfielders ever to play the game. Coutinho, on the other hand, is pure flare, a showman in the Brazilian “jogo bonito” mold, meaning “the beautiful game.”

Fleming, herself, approaches the game in a direct manner. She doesn’t waste time in possession and moves the ball forward.

But, as her heel flick against Florida and a Zinedine Zidane-like touch against Cal indicated, she’s sprinkled in some flare to complement her directness.

[Related: Women’s soccer falls to No. 6 Florida in overtime match]

“She’s starting to have a little more fun with the game as she’s gotten older, but she’s a pretty business-like player,” John Fleming said.

While Fleming’s career continues to grow, her story remains closely linked to the foundation provided by her family.

Since chances to go home are scarce, as are family visits, the talented midfielder makes sure to cherish the time she can spend with her parents and siblings.

“When I get to see them and spend time with them and when they come watch me play, it’s just that much more special,” the Canadian teen said.

Even in the midst of a busy freshman UCLA season and a heavy academic load as a materials science and engineering major, Fleming still revisits her roots.

During her family’s treks down to Los Angeles, she makes sure to partake in an old tradition.

“I still enjoy running, more so with my dad and my brother,” Fleming said. “When they’re here, I definitely take the time to go for a run with them.”