LGBT Christians at UCLA speak out on InterVarsity policy 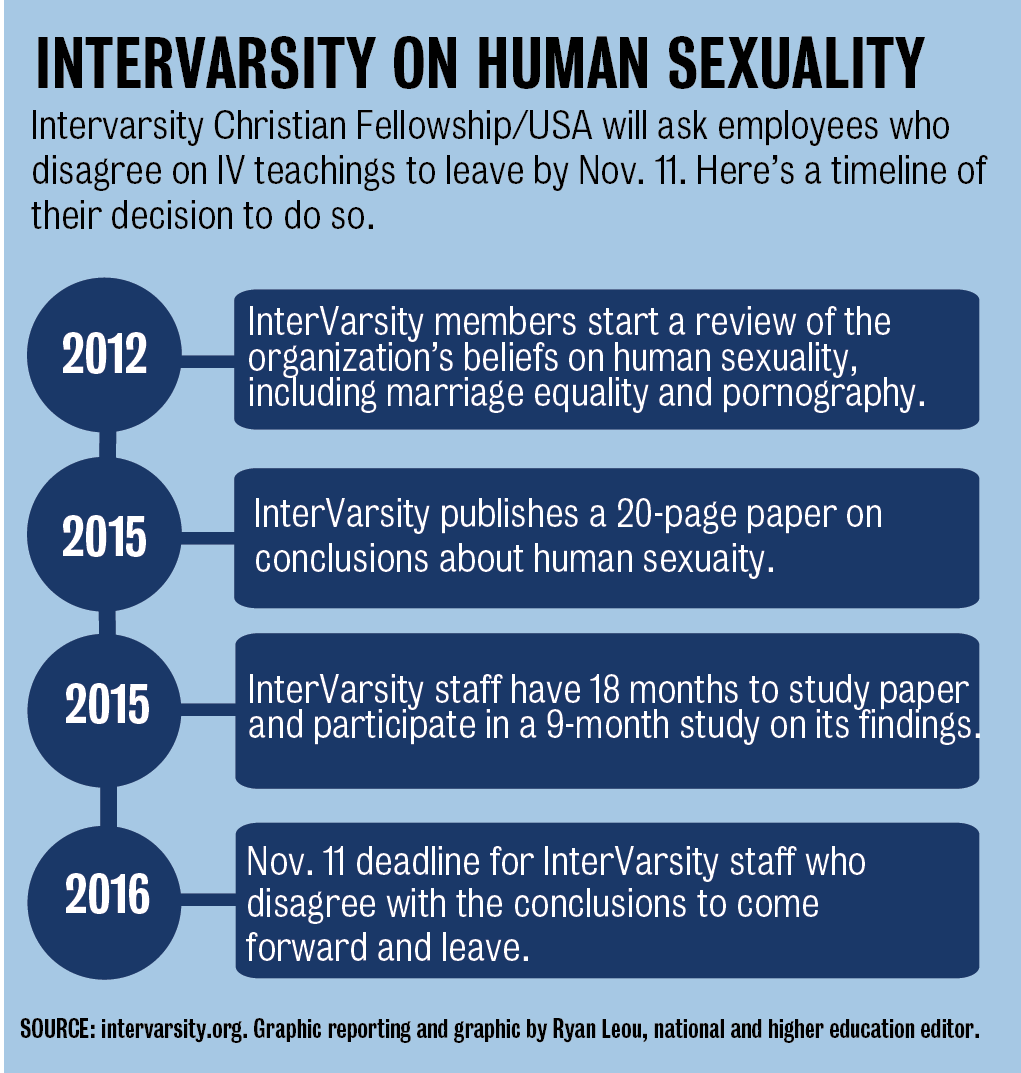 Catherine Cheng, a PRISM leader and a third-year electrical engineering student, said queer students and allies shared petitions and their experiences on social media to urge InterVarsity USA to reverse its policy. They used the hashtags #NotMyIV, #InterVarsityDoBetter and #InterVarsityPurge.

Cheng said she joined PRISM in her first year, even though she was not Christian at the time, because she wanted to join a queer organization and believed that Christians were friendly.

“I became a Christian last Nov. 11, and it’s very ironic this policy takes effect on the same day I turned to Jesus,” Cheng said.

She said she skipped the fellowship’s weekly meeting last Thursday after she learned about the policy because she no longer felt welcome and feared judgment from other members.

PRISM hosted a town hall after the fellowship’s general meeting where Cheng and other PRISM student leaders discussed the policy with InterVarsity members, many of whom were LGBT allies.

Tucker Moses-Hanson, a PRISM leader and a second-year Middle Eastern studies and religious studies student, said he thinks the policy goes against InterVarsity’s commitment to studying theology and accepting different interpretations of the Bible.

He added he thinks leaders will now feel unable to question InterVarsity’s specific stance or learn more about the LGBT community without risking their jobs.

“The fact that (PRISM) exists as an option inside InterVarsity makes queer students feel safe attending larger InterVarsity events,” he said. “But the policy is a message we don’t want to give queer folk on campus – that we’re as unreceptive as other Christian groups.”

Steven Mion, a fourth-year political science student and PRISM leader, said he thinks many students join the group because other religious spaces are unwelcoming.

During zero week of his first year, Mion went to different Christian fellowship groups trying to find the right fit. The first fellowship he attended did not realize he was gay and commended him for trying to “fix” people after Mion told them he ministered to LGBT individuals, he said. After that, Mion said he realized not every space at UCLA was safe or supportive.

“I asked (each fellowship) up front, ‘Am I going to be welcome here as an out, gay man who wants to be a Christian?’” he said. “It wasn’t until I found InterVarsity that I found someone that said ‘Yes, we have a group for you.’”

He added he thinks there are two components to ministering to LGBT people: defending them from negative interpretations of the Bible and interpreting the Bible to support them.

Kelly Joiner, the InterVarsity Bruin Christian Fellowship group leader, said the national organization employs about nine people, including herself, at the UCLA chapter. Employees are hired by InterVarsity to facilitate the campus chapter’s activities, which are mostly student-led.

Employees have the choice to come forward with beliefs that differ from InterVarsity’s theology on sexuality and subsequently leave the organization. However, the fellowship will not force them reveal their views, she said.

Joiner added she does not want LGBT students to feel unloved because of the national policy.

“None of this is going to change what we do at UCLA,” she said. “InterVarsity supports PRISM, and we’re very committed to loving and learning from the LGBTQI community and to fighting homophobia and judgment.”

PRISM leaders said they are unsure whether the organization will remain under InterVarsity if the policy stands.

Cheng said she thinks it would be necessary for PRISM to leave InterVarsity at UCLA if the policy is not reversed. But once they are outside of the organization, it may be harder for them to reach out to other Christians and advocate for the LGBT community, she added.

She also said she thinks the policy will not just alienate LGBT Christians, but silence their allies.

“It’s clear in the Bible that Jesus loves and reaches out to marginalized people,” she said. “The fact that InterVarsity is marginalizing its employees based on their beliefs is not setting a good model of Christianity.”

Mion said he thinks LGBT students are going to be alienated regardless because leaders who support them will be removed.

“If there is no one there to say ‘God loves you for all of you, including this part of you that makes you so happy and that is so genuine,’ then there is no space for you in that fellowship,” he said.