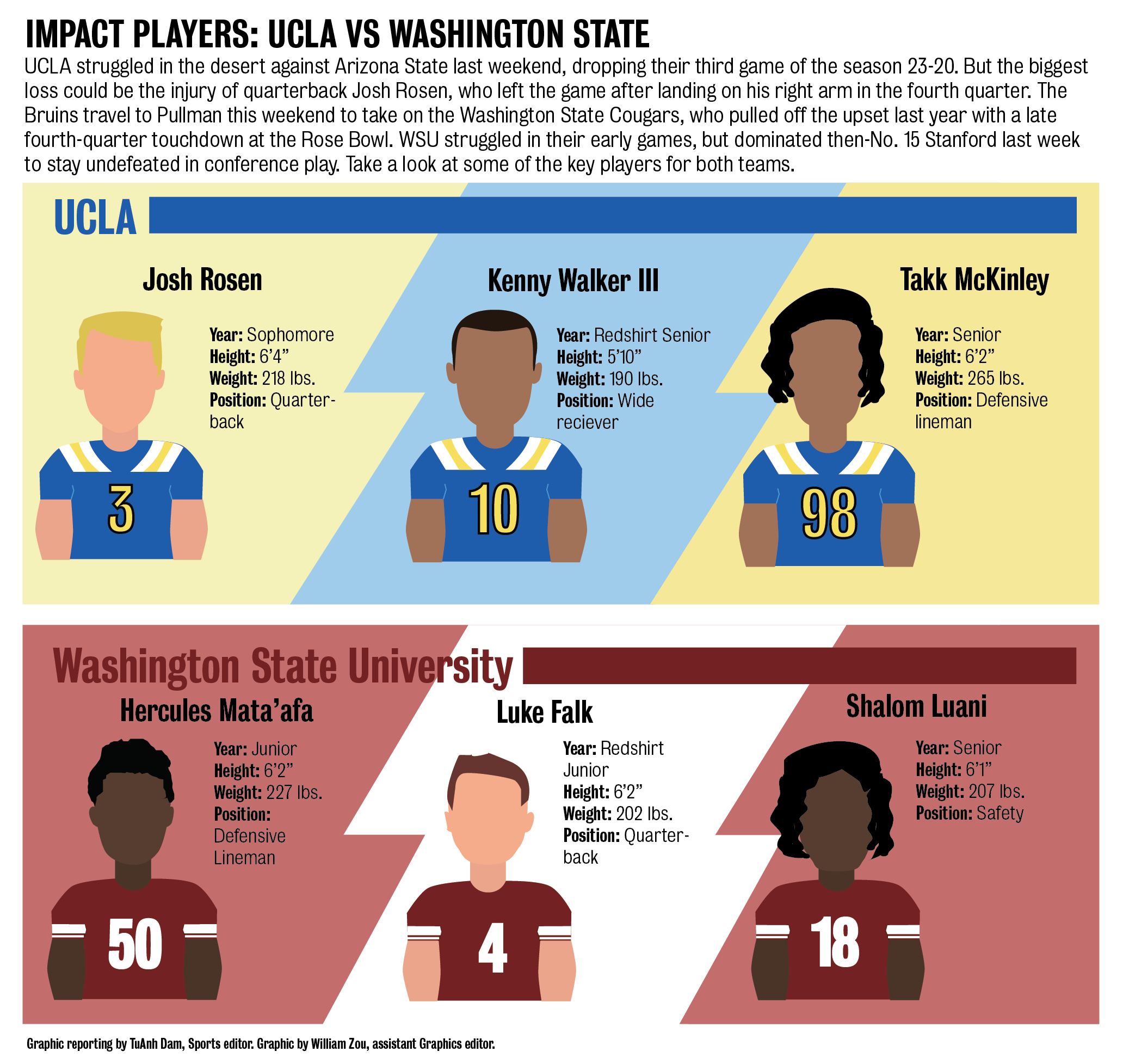 UCLA football heads up to Pullman, Washington, this weekend for the first time since the 2012 season – when the Bruins defeated the Washington State Cougars, 44-36.

Mora outperformed Leach by a wide margin in his first three years, posting a 29-11 record at UCLA while Leach stumbled to a 12-25 mark. But over the past year, Leach has started to gain considerable ground against Mora and the Bruins.

And, one more thing: Leach’s team beat Stanford 42-16 last week – that team that UCLA has lost to nine straight times. Needless to say, Washington State is trending up.

Without further ado, here’s a scouting report for Washington State – a team that features Leach’s trademark air-raid offense, and an improving defense.

UCLA fans are well aware of what Washington State quarterback Luke Falk can do. Last year, Falk led a clinical, seven-play, 75-yard touchdown drive in the final minute to give the Cougars a 31-27 comeback victory over the Bruins at the Rose Bowl.

On that drive, UCLA played prevent defense, losing its will to pass rush and blitz Falk off the edges. As a result, the Washington State gunslinger was able to sit back in the pocket and do what he does best: dissect defenses.

But that’s not to say that Falk can’t handle the blitz. Last week, Stanford brought five or more rushers against Falk on three occasions. On those three plays, Falk went 3-for-3 for 49 yards and two touchdowns.

The key against Falk is forcing him out of the pocket, somehow, some way. In the Stanford game last week, Falk never once completed a pass while he was rolling outside the pocket.

Forcing Falk out of the pocket is easier said than done, however, because he gets rid of the ball so quickly. Last week, 11 of Falk’s 41 pass attempts were quick passes or bubble screens that occurred behind the line of scrimmage. Even on Falk’s downfield throws, he gets rid of the ball very quickly because he usually centers in on one target from the start of the play.

Bruins rolled out an interesting wrinkle Saturday to take advantage of Takk McKinley’s speed, standing him up and using him as a blitzing LB pic.twitter.com/2inGJGhx8B

Oh, and by the way: Washington State can run the ball, too. All three of the Cougars’ featured backs – Jamal Morrow, James Williams and Gerard Wicks – are averaging over 4.8 yards per carry this year. Each player has 35-plus carries on the year.

Although much is made of the Cougars’ high-powered offense, it’s their defense that could pose the Bruins with the most problems.

The Cougars have a standout edge rusher in redshirt sophomore defensive end Hercules Mata’afa, who plays both the run and the pass very well. Last week against Stanford, Mata’afa recorded a QB hurry, a QB hit that led to an interception and a sack.

UCLA has struggled all year with strong edge rushers, and that’s exactly what Mata’afa is. Washington State may have just eight sacks as a team, but Mata’afa is responsible for four of them. The Bruins will need to use a tight end to chip on Mata’afa if they are going to have success in the passing game.

While the Cougars don’t blitz much – they blitzed on just seven of the first 43 snaps against Stanford – they utilize a lot of stunts and complex twists up front. UCLA’s guard will need to be aware of that and communicate switches appropriately.

As for Washington State’s run defense, it is as stout as it comes in the Pac-12. The Cougars rank second in the Pac-12 with just 116.8 rush yards allowed per game and 4.0 yards per carry. Last week, they held Stanford standout running back Christian McCaffrey to just 35 yards on eight carries.

In sum, UCLA’s struggling running game may have another tough game Saturday in Pullman.

Related Washington State coverage:
Predictions: Who will take this weekend’s Pac-12 showdown?
Preview: UCLA gets a chance to turn conference play around this weekend