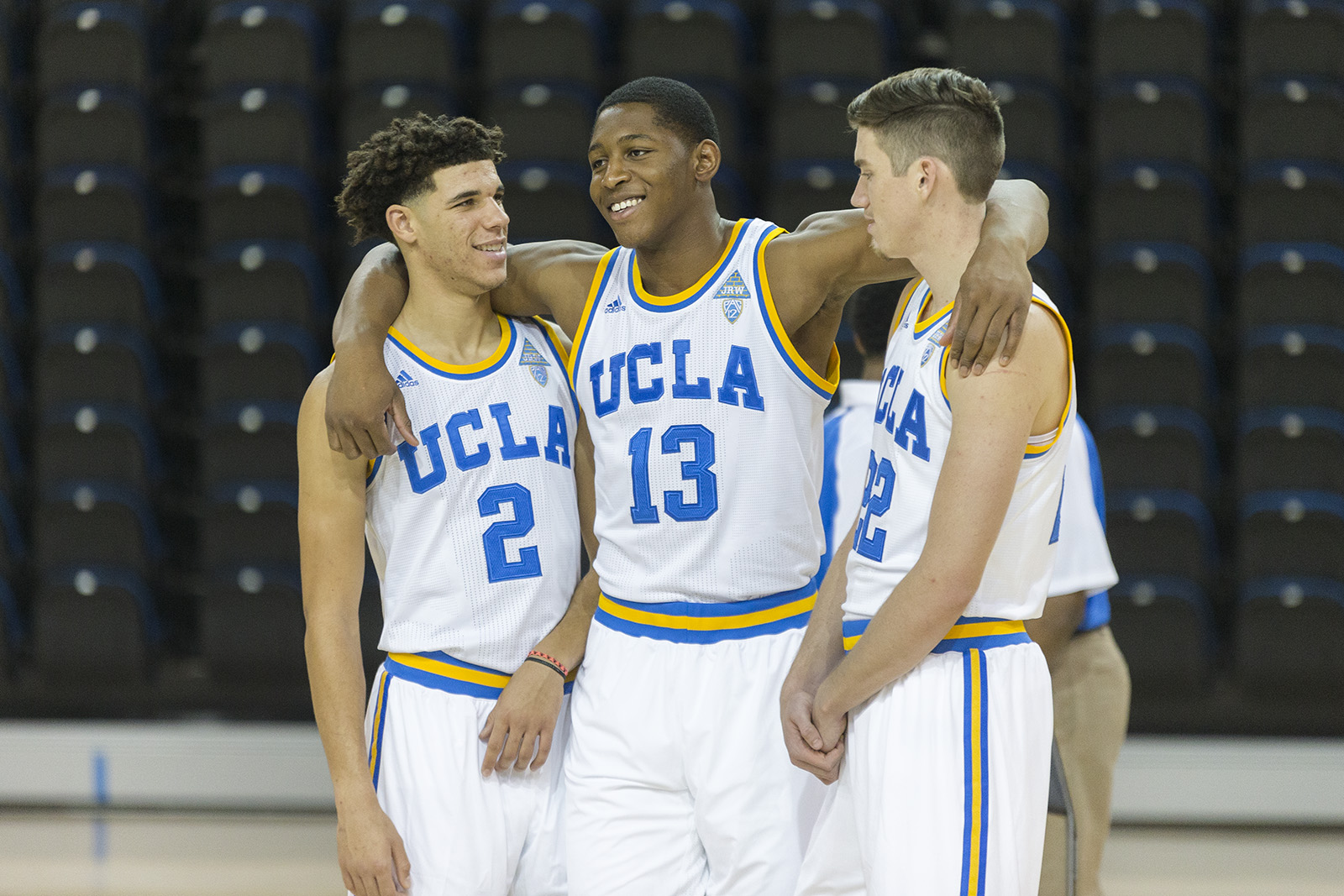 UCLA men’s basketball has a trio of freshmen that have been the talk of the town, and how they play will be critical for the Bruins’ in the upcoming season. (Aubrey Yeo/Daily Bruin senior staff)

There were somewhere between 50 to 100 fans outside of the UCLA exhibition game waiting for Lonzo Ball’s autograph.

And this 18-year old freshman point guard hasn’t even played a college game yet.

That’s what happens when you lead your high school team to a perfect record en route to winning the California state championship before headlining a top-five recruiting class.

The three freshmen who are about to make their highly anticipated debut in Westwood – Ball, forward TJ Leaf and forward/center Ike Anigbogu – have given a Bruin team that finished 15-17 last year a much needed shot in the arm. They’re expected to bring speed, vision, versatility, playmaking ability, rebounding, defense and anything else UCLA might need to move on from a disappointing season.

“Last year was last year, this is a new year,” Ball said. “We got new faces, the vets are ready to win, we’re ready to win. I’m just going to do whatever I can to contribute to that.”

But how fast and far this team can go in leaving behind the ghosts of yester-year will likely come down to how this young group develops and adjusts to the college game.

Coach Steve Alford stressed before the team’s 10th practice Wednesday afternoon that whatever accomplishment that came from high school really means nothing at the next level. He said that Ball is starting to learn that the college game is a start-over.

Yet, that doesn’t mean some of the talent and hype won’t carry over.

“He’s one of the most hyped kids I’ve seen out of high school, but it’s well-deserved,” Bryce Alford said. “He’s probably the best passer I’ve ever played with, along with (former guard/forward) Kyle Anderson.”

Ball’s presence has already allowed the coaching staff to start playing Alford off the ball more. After a year of always bringing the ball up and getting everyone into the offense, Alford will now have more freedom to roam around as a shooter.

With Ball’s speed and passing, the Bruins offensive game plan will be to run early, often and late. Steve Alford already has the freshman point guard pushing the pace hard in practice, but he wants to challenge Ball to see just how fast he can roll.

Running alongside the freshman will be his choice of weapons from shooters to versatile bigs.

Scoring this year shouldn’t be a problem, with the chemistry on offense already evident in practice. The ceiling on UCLA’s potential will likely come down to the defensive end, where Anigbogu is expected to make an impact down-low as a rim protector. Leaf will also be looked upon to lock up the rebounds.

There’s no doubt that big things are expected from this freshmen trio, but they have so far avoided any pressure from such high expectations.

“It’s more of an excitement around the program, we know we have the talent to make some people really believe in us,” Leaf said. “If we can just buy in defensively, I think we’ll have a heck of a year.”