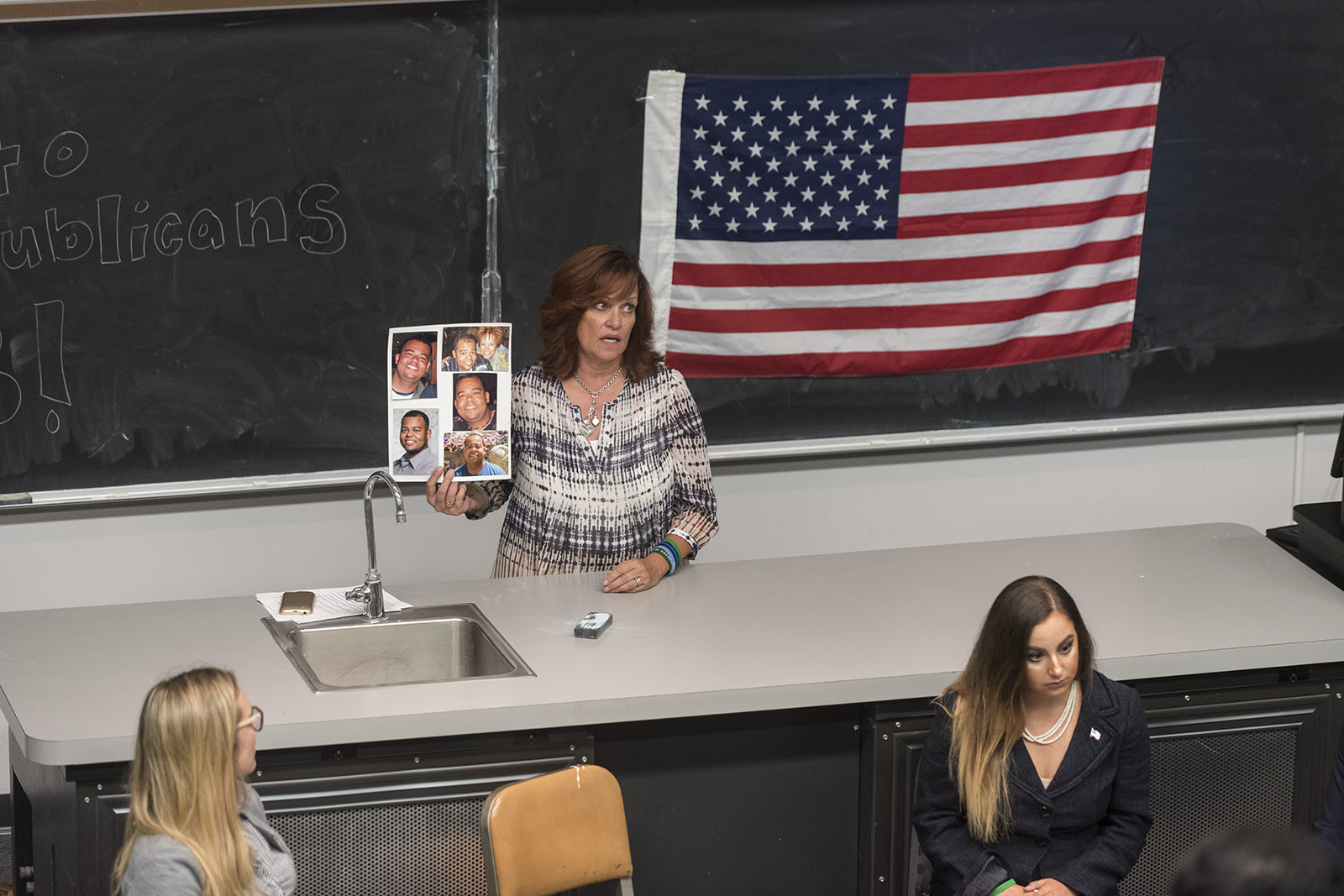 A student’s hums drowned out the words of a speaker at a Bruin Republicans event titled “Sabine Durden: An Illegal Immigrant Killed My Child” on Thursday evening.

Audience members joined in by snapping their fingers, as the student continued to hum to the rhythm of various cultural songs in protest of Sabine Durden’s speech against undocumented immigrants.

“Every illegal student takes the place of an American one,” said Durden, the guest speaker for the event.

Durden, who has toured the country with Republican presidential nominee Donald Trump, said her son was killed by an undocumented immigrant.

Durden claimed the person who killed her son had been deported to Guatemala before for previous felonies. She said he re-entered the U.S. and was on his second round of probation when he allegedly killed her son in a car accident while drunk driving.

“Immigration is just an important topic – one that has been the cause of controversy throughout this election,” Nieves said. “We want to have an organized, intelligent discussion and hope to really change some perspectives.”

But the event devolved into a shouting match between audience members and panelists. A Bruin Republicans member shouted “Deport him!” at the humming student, said Frida Ramirez-Aldapa, a fourth-year human biology and society and French student.

After Durden finished speaking, Bruin Republicans members asked questions about her beliefs on immigration. Then, general audience members questioned Durden about her use of the term “illegal alien” and the claim that deportation would make the U.S. safer.

One student said she has never felt safe in the country because of her African-American nationality.

When an audience member asked Durden what she thinks about Trump’s policies being called bigoted and xenophobic, Durden said, “Yawn.”

“Illegal immigrants can’t expect to come here and get royal treatment,” Durden said. “Building the wall is the first thing we need to do because we need to stop the bleeding.”

Nieves said she thinks the death of Durden’s son could have been avoided if the United States enforced its immigration laws more strongly.

“We need to start criminalizing illegal aliens and change their influence in society because as of now, people are not upholding the law,” Nieves said.

“Not (every illegal immigrant) is bad, but (all are) criminals,” Durden added.

“The name (of the event) itself creates so much pain,” said Isabel Figueroa, a third-year psychobiology student. “They projected an isolated incident on a helpless population.”

“People don’t understand that, despite my status, I don’t know my country of origin,” Palma-Cruz said. “I didn’t grow up in Mexico, I speak Spanglish and only know the American system. If I were deported I don’t know what I would do.”

Palma-Cruz said she thinks many undocumented students may have felt uncomfortable speaking out at the event because they worry that exposing themselves can lead to deportation.

Palma added that she only felt comfortable talking about her immigration status because she was protected under Deferred Action for Childhood Arrivals, or DACA.

DACA allows certain undocumented immigrants to work and be exempt from deportation for up to two years, before having to renew their application.

Ramirez-Aldapa said she thought inviting Durden to speak was distasteful. She added she thinks it was clear that Durden didn’t have in-depth knowledge of many of the issues that were discussed.

“This person obviously is in pain,” she said. “The fact that (Bruin Republicans) were capitalizing on her suffering to promote bigotry is simply cruel. Whatever your stance is … they are deliberately using her by bringing her to this event. It’s cruel, and it’s pathetic.”