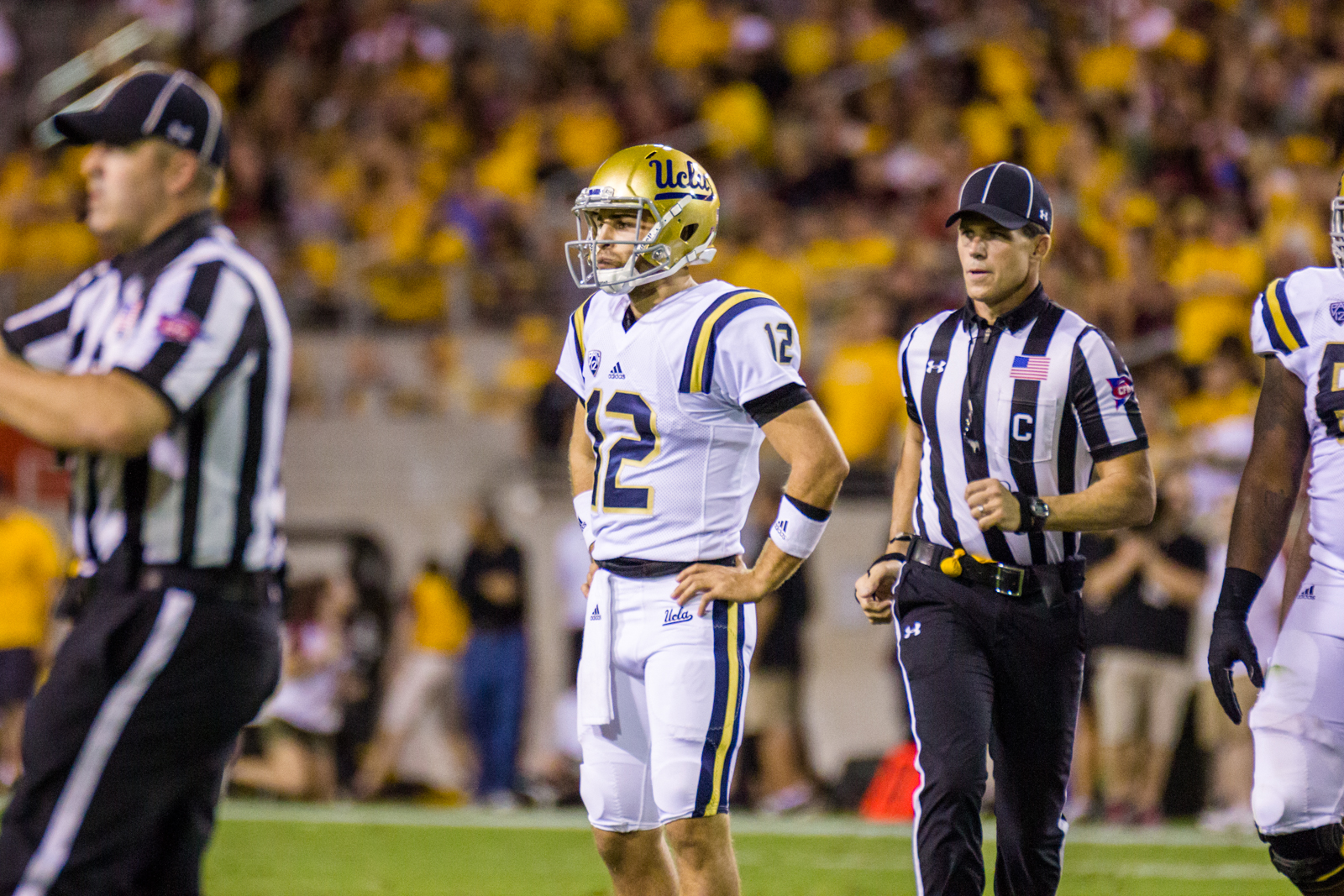 For anyone who watched UCLA’s final possession Saturday against Arizona State, it came as no surprise that Mike Fafaul mentioned the speed of the game as a challenge.

The redshirt senior backup quarterback, thrust into the game because of multiple injuries to sophomore Josh Rosen, and the Bruins’ offense took the ball at their own 40-yard line down 23-20 with 48 seconds left, and looked utterly overmatched.

It would have taken 60 yards for a game-winning touchdown, or about 35 to put struggling freshman kicker J.J. Molson in position for a game-tying field goal.

Instead, the Bruins lost 10 yards – and a hefty chunk of game clock – on a pair of sacks before Fafaul chucked a desperate pass into the arms of Sun Devil defensive back Robbie Robinson on third down.

“It’s my fault as the quarterback,” Fafaul said afterward of the difficulties on the final drive. “I didn’t get the ball out quick enough. It’s a lot faster out there than practice.”

Fafaul, seeing the first significant action of his career, went 3-for-11 for 44 yards and two interceptions in relief of Rosen.

Facing off against a defense that allows by far the most passing yards per game in the nation, Fafaul posted a passer efficiency rating of just 24.5 – the lowest since 2008 by a Pac-12 quarterback who threw 10 or more passes.

“Being out there for the first time in a real game is just a little different,” Fafaul said. “There’s a lot of things I left on the table that I’m disappointed I couldn’t do.”

His first pick came on a third down early in the third quarter, when Fafaul tried to connect with redshirt junior receiver Eldridge Massington, but didn’t put enough zip on the ball. He also didn’t throw it far enough to the sideline, which allowed ASU defensive back Gump Hayes to come up with an easy interception.

The second interception sealed the loss for the Bruins, bringing them to 3-3 as they head into the second half of their schedule with a very real possibility that Rosen won’t be available going forward.

As frustrating as Saturday’s outing was for Fafaul, it will help him if he does have to take the reins in the coming weeks, he said.

“I feel like I got used to the speed the style of play and the way the plays fit,” Fafaul said. “I’ve been working for this for four years now and I’m going to give it the best I can. I think I can help us win.”

An improvement in the running game would also go a long way toward helping UCLA win. Coach Jim Mora pointed out in his press conference that Fafaul was disadvantaged by the anemic running game, which generated -17 yards in the second half and -1 yards overall.

“He was put in a tough spot since we couldn’t run the football,” Mora said. “They were rushing him hard and he approached it as well as he could. We have to help him. We did not help him enough.”

Defense does its job

Though the Bruins couldn’t pull out the victory, the defense delivered another strong performance Saturday night.

UCLA allowed just 275 total yards to Arizona State, marking the first time the Sun Devils have been held to under 450 yards this year.

The Bruins have made it through the first six games without allowing an opponent to tally 400 yards, a feat they hadn’t accomplished since 2010.

And after keeping Arizona State to just 23 points, UCLA has limited each of its first six opponents to 24 points or less in regulation for the first time since 2001.

The Sun Devils threw the ball 39 times for just 196 yards on the game, continuing a stretch of excellent pass defense that has the Bruins ranked fifth in the nation in fewest yards allowed per attempt.

The offense’s struggles allowed Arizona State to start three separate drives in UCLA territory, but the defense held the Sun Devils to field goals on all three.

“Limiting them to field goals after the turnovers, I thought that was a win,” said defensive coordinator Tom Bradley. “It could have gotten out of hand.”

Instead, the defensive effort kept it close but ultimately wasn’t enough.

In the second half, ASU quarterback Brady White started to settle in, picking up 156 of his passing yards and throwing for a touchdown.

On the whole, though, the defense, for the fourth straight week, did its job.

“Our defense has been stellar since BYU,” Mora said. “It has been about as good as defense is played, really, since I have been here. So it is unfortunate that our offense has been substandard.”