Twins attempt to put period on the imposition of menstrual taxes 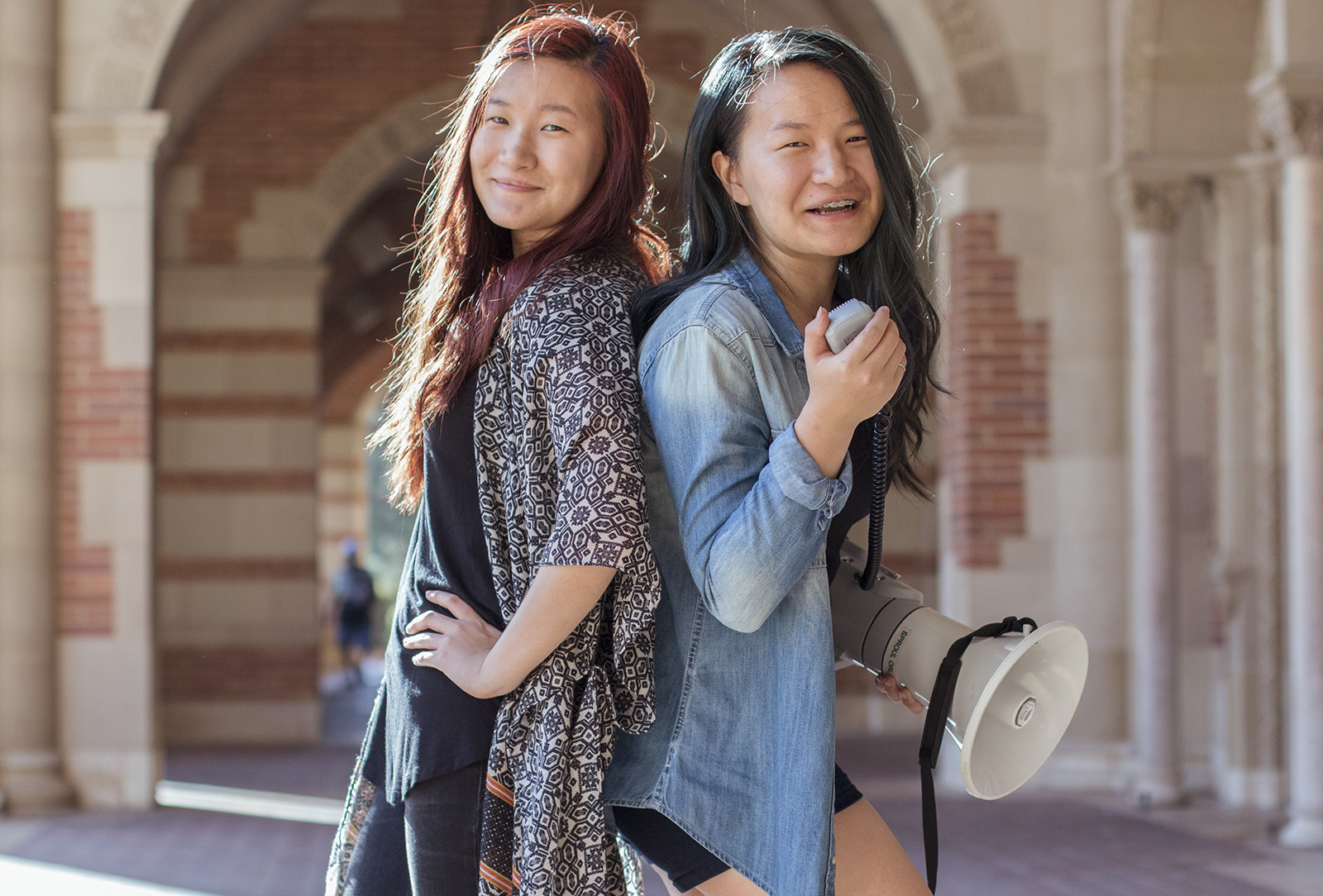 Second-year students Helen Lee and Rachel Lee began protesting against the sales tax on menstrual products, a campaign that led them to the state capitol last month. (Efren Piñon/Daily Bruin)

Helen and Rachel Lee went on a college shopping trip together before they moved into UCLA and noticed something odd with their receipt.

“We went over budget, but we couldn’t figure out where we hit the hardest,” Helen Lee said.

They realized that while a significant portion of their money went towards tampons and pads, the sales tax only added to the cost.

After researching California state law, Helen Lee, a second-year philosophy and global studies student, discovered some products necessary to life are exempt from the sales tax. When she found out menstrual products were not exempt but products like Viagra and lubricants were, she was outraged, leading her to start a petition with her sister.

Years of signature-gathering and phone calls culminated in their most high-profile project to date – the push to get rid of sales tax on menstrual products.

The twins’ enthusiasm for addressing social issues took them to the state capitol last month, where they called on Gov. Jerry Brown to sign a bill exempting menstrual products from the state sales tax.

The twins started their campaign against the sales tax on their own, with clipboards and physical forms. Rachel Lee, a second-year political science and communication studies student, said she and her sister spent long hours garnering signatures at the mall and around libraries before they transferred the text to an online Change.org petition.

“Initially, the online petition was slow (to gather signatures),” Rachel Lee said. “We were surprised to get 8,000 signatures over seven to eight months and we almost decided to throw in the towel.”

Juliana Britto Schwartz, a campaigner at Change.org, said she helped publicize the twins’ petition and get the attention of elected leaders like state Assembly members Cristina Garcia and Ling Ling Chang.

Garcia and Chang sponsored the bill that would have eliminated the sales tax on menstrual products. Gov. Brown vetoed the bill on Sept. 13, saying the tax cut would have been the same as increased spending.

Schwartz said she was impressed by how organized Helen and Rachel Lee were when she first talked to them over the phone.

“At their age, they were really well-versed on what they were tackling and clearly enthusiastic,” Schwartz said.

Though the petition garnered more than 25,000 signatures, the twins were not without their detractors.

Rachel Lee said people from around the country sent hate mail, something she didn’t expect.

“People in general can disapprove of our points, as long as they bring it up in a constructive way,” she said, “But that’s not what happened.”

Helen Lee said she was unsure how to respond to personal attacks against her youth, gender and ethnicity.

Joanne Fawley, an Advanced Placement U.S. government and politics teacher at the twins’ high school, didn’t teach Helen or Rachel Lee directly. However, she said she got the chance to know them through conversations about local politics, including the menstrual product sales tax issue.

Fawley added she thinks the twins succeeded in applying classroom concepts to the real world with their campaign against sales tax on menstrual products.

“Helen and Rachel were students who went beyond the classroom,” Fawley said. “It’s not just memorizing; Helen and Rachel knew how to connect ideas, be interested and get involved.”

Beyond political activism, the twins have attempted to invent ways to address social issues.

Rachel Lee said she and her sister were inspired to apply business techniques to social issues when they were children and watched their father try new business approaches in his beauty supply store.

When she was younger, she didn’t understand why their father would reorient shampoo racks or move the cash register from the front to the back of the store. As she grew up and joined discussions around the dinner table, she realized her father’s experimentation was a byproduct of his ingenuity and willingness to try anything to improve his business.

“It was really inspiring watching his projects come to life,” Rachel Lee said. “He would just go for it and try different things.”

His dedication to his small business inspired the twins’ social entrepreneurship, which uses business startup techniques to address social issues.

Rachel Lee said in her junior year of high school she came up with the idea for a solar-powered phone charger.

“It might not seem like an innovative idea now, but it wasn’t commercialized in 2014,” Rachel Lee said.

She added while she had no background in physics or electricity, she worked with her sister on an unorthodox approach to learning how solar electricity works: dissecting solar-powered lawn lamps to see where electronics connected.

Rachel Lee said she and her sister patented the prototype for their charger, drawing their preliminary designs on Starbucks napkins before hand tracing them on vellum for the patent application.

“Making little things like the charger helped us to reach our larger goals,” Rachel Lee said. “I wouldn’t say it was as successful as we wanted, but designing and getting the patent helped us learn.”

Rachel Lee also said she is looking past the veto of the menstrual product sales tax exemption, and that she wants to take her and her sister’s passion for solving social issues to the national level.

Helen added she doesn’t know what she will work on next but loves inventing, even if she doesn’t have a strong technology background.

“(The future is) a big surprise for me too,” Helen Lee said.