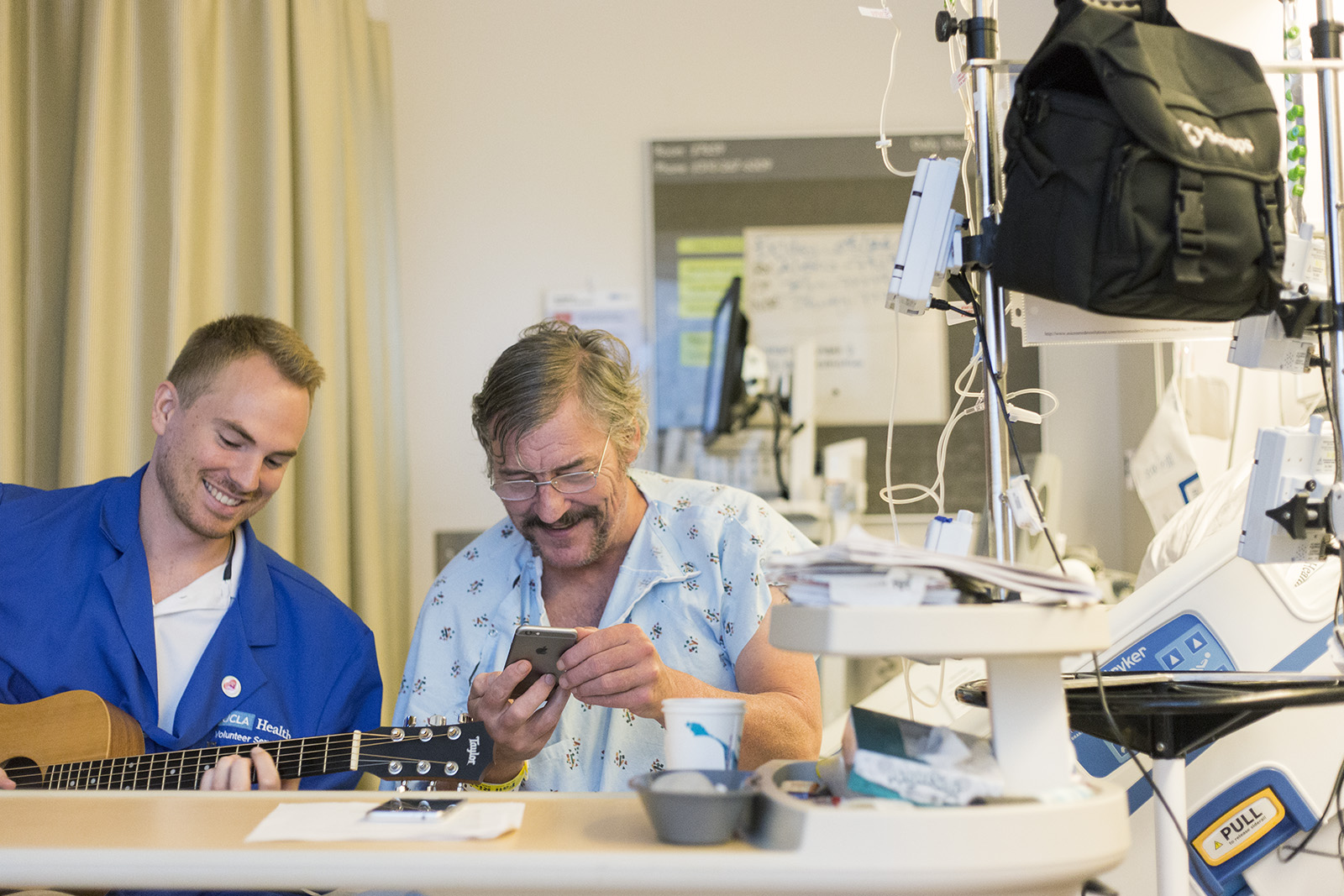 Doctors, nurses and visitors bustle past one another under directory signs in the white, marbled lobby of the Ronald Reagan UCLA Medical Center. But upstairs on the seventh floor, noises settle into a rhythm of beeping heart monitors and murmuring nurses.

At the cardiac care and observation unit, heart transplant patients can spend up to four months with little to do besides wait for an organ, said unit nursing director Anthony Chan, who has worked at the hospital for 16 years. Much of their days are spent alone until volunteers from a program called Heal My HeART arrive for another therapy session.

UCLA cardiologists partnered with students at Marymount High School in April 2014 to establish Heal My HeART, an art and music therapy program designed to help relieve the emotional and physical strain that come from heart failure and transplant recovery. Volunteers play music, draw and paint with patients in 30- to 60-minute sessions.

Heal My HeART helps cardiac patients between the ages of 18 to 65 escape long hours of solitude and express themselves through art when they’re too vulnerable to use words, Chan said.

“They wake up, take medications, get stuck with IVs, get their blood drawn, they eat and that’s pretty much the cycle,” Chan said. “(Heal My HeART) really provides a distraction. It gives them an outlet to express their feelings, their artistic side, whether it’s painting or music, and gets their creative juices going.”

About six volunteers serve a dozen patients monthly, said Sandra Molina, a hospital volunteer coordinator. Patients can sign up to have an artist or musician visit them, but most of the program’s volunteers go door-to-door looking for patients to work with.

Ryan Thomas, a 25-year-old UCLA alumnus, has been volunteering with Heal My HeART for the maximum allotted 20 hours a week since June.

Thomas noticed an immediate change in the demeanor of the first patients he worked with in the program.

“I just started playing (music) and then eventually the patients started asking for requests and then started singing along … all of the sudden, nurses were coming by and doctors and the whole mood in the room just lifted,” Thomas said.

He said the patients connected the songs with times when they were young and healthy.

Thomas said after he and a patient connect over a song, any initial awkwardness disappears and they are able to talk about each other’s lives.

“Music just kind of opens the door,” Thomas said. “They’re talking about a song that touched part of their life and then they start talking about where they’re from. You just get to hear these amazing stories and then how … all that is taken away from them. They still have those memories but they don’t know if they’re going to leave this place.”

Thomas said he tailors songs to fit each patient’s age and taste. For white male patients in their 50s, Thomas starts by playing songs that were popular in the ’70s, in addition to hard rock, country western or jazz. If there’s no response, Thomas asks the patient what styles he likes. They connect over a common artist and find a song they both like.

Thomas said he noticed some patients, who can’t walk due to a combination of heart and back problems, would tap their feet along to the beat of his music.

“There are people who need lift teams to move them back and forth from the hospital bed and scream in agony if a nurse puts a sock on their foot,” Thomas said. “And then (they do) this physical therapy through music and they aren’t really even realizing it.”

In 2003, Corrigan was diagnosed with cardiomyopathy, a heart disease of unknown origin. He takes 14 pills in the morning and 11 at night.

Many cardiac transplant patients are hooked up to Left Ventricular Assist Devices, or LVADs, which help the heart pump, Chan said. But the devices rely on a battery pack that can limit patients’ mobility and require frequent monitoring.

A drawing of Darth Vader covers the large white patch on Corrigan’s torso where the LVAD is connected, courtesy of one of the volunteer artists.

“I was joking with the doctors. ‘Doctor, doctor, I feel like I’ve got this dark force over me! Can you tell me what you think?'” Corrigan said. “I lifted it up and they all started laughing.”

Corrigan has been hospitalized for four months as he waits for his heart transplant. Because he is 6 feet 1 inch tall, finding an organ match is especially difficult, he said. He expects to receive his new heart in September.

As Thomas entered his hospital room, Corrigan scrambled to comb his hair. The father of 10 joked that he had to look presentable for visitors.

Thomas sits at the edge of Corrigan’s hospital bed to discuss their favorite artists at the start of each session. Tom Petty, the Eagles, Jimi Hendrix, Johnny Cash and Waylon Jennings top the list.

Corrigan used to play the guitar himself but stopped after an injury and sold his guitars.

Now, he and Thomas collaborate to create original music based on their favorite classics. It takes them about 15 minutes to write a song from start to finish. A few they’ve penned include “Sitting In The Hospital Bed,” sung to the tune of Otis Redding’s “(Sitting On) The Dock Of The Bay” as well as “Rollin’ In A Wheelchair,” sung to the tune of Creedence Clearwater Revival’s “Proud Mary.”

In their last session, Thomas and Corrigan went to a hospital patio to perform a few classics and original songs they wrote together. Corrigan said crowd members’ eyes watered as the two played the guitar and sang along to James Taylor’s “You’ve Got a Friend.”

All patients must remain in the hospital for at least a week after the transplant surgery, so the earliest Corrigan can leave is mid-September.

Corrigan said he’s excited to see his kids more than just on weekends once he is released.

“I have a 6-year-old son. They did let me out of here on Father’s Day and we went fishing. We didn’t catch any fish,” Corrigan said with a laugh. “The next day, he graduated from his pre-K class at 10 o’clock. At 1 o’clock, I was right back in the hospital.”

A tattoo peeks out from beneath a hospital gown on Corrigan’s left arm. A short phrase: “To live for” sits above a list of his kids’ names, followed by “To die for.”

“I never believed in tattoos until five years ago and I couldn’t think of a better tattoo to put on,” Corrigan said. “To live for and to die for: my kids.”