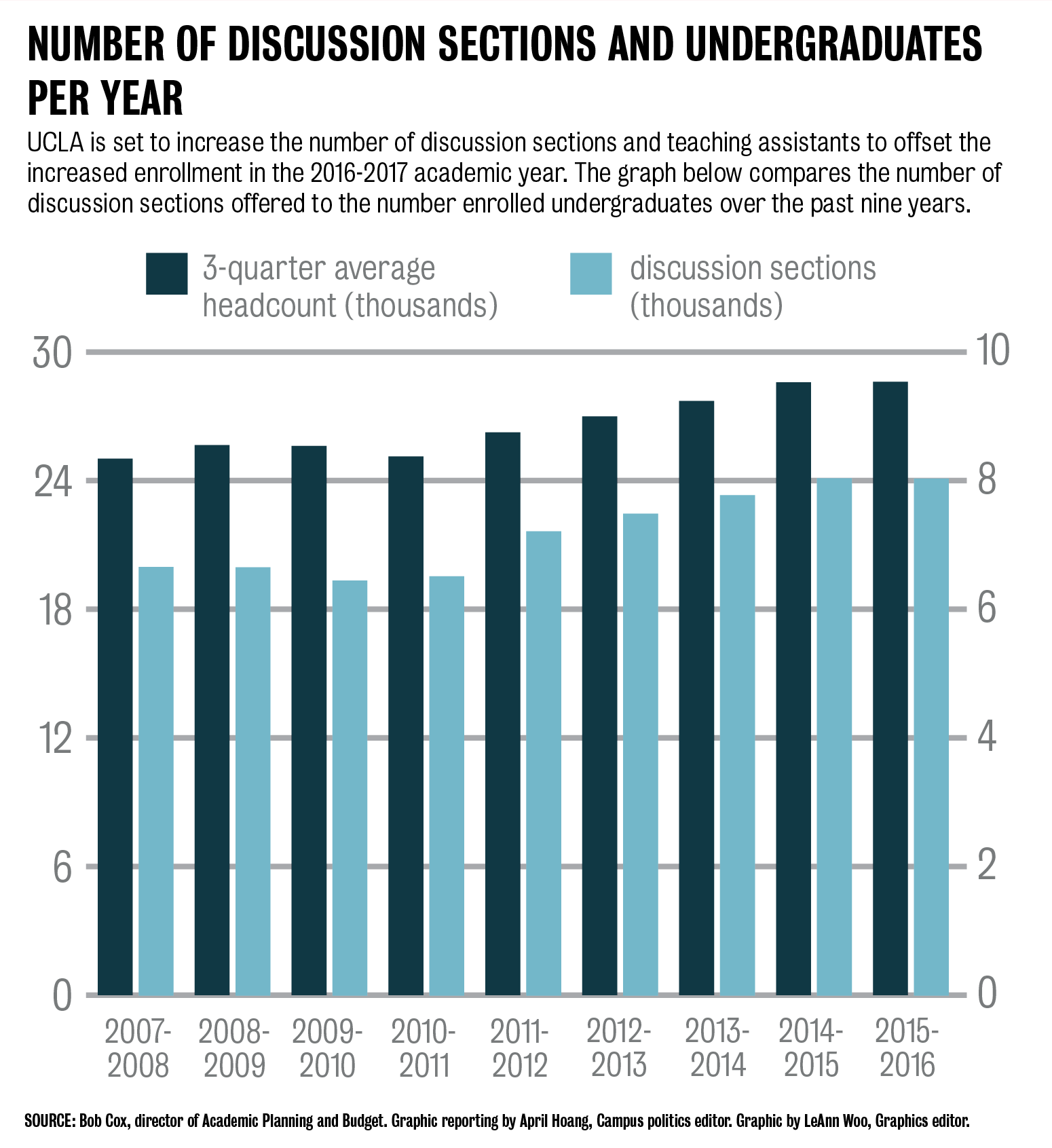 The number of undergraduate discussion sections in the College has grown steadily each year since 2010.

UCLA officials are working to supplement the increase in undergraduate enrollment for the 2016-2017 academic year by increasing the number of discussion and lab sections.

Robert Cox, director of enrollment planning and academic performance analysis, said he is expecting an increase of at least 150 more discussion and lab sections from fall 2015 to fall 2016. However, the number of added sections will depend on how many graduate students will be available to serve as teaching assistants.

The University of California system has admitted an additional 5,000 incoming resident freshmen and transfer students in the 2016-2017 academic year. The UC system will match a $25 million allocation from the state to help cover costs related to the increased enrollment.

The enrollment increase has led some to wonder whether discussion sections will become overcrowded.

For instance, TAs may have to proctor more rooms for exams and ensure that students enrolled in a certain lecture get seats before other students from a different lecture.

“Students may also feel a bit more like just another number,” he said. “With more students, there’s less of a sense that you can actually get to know your TA.”

To accommodate for the increase, some departments are increasing the number of graduate students they admit, so there is a larger pool of potential TA applicants, said Reem Hanna-Harwell, the assistant dean of humanities. Usually, the departments that admit the most undergraduates also admit more graduate students, she added.

“(For example), the linguistics department has been growing its graduate student population in part because they have so many (undergraduate) discussion sections,” she said.

Because the number of graduate students in each department can fluctuate based on that year’s resources for the department, some departments plan to borrow TAs from related departments.

“If the math department is too small, (they may) look for graduate students to serve as math teaching assistants from other departments (such as) engineering and computer science,” she said.

The number of TAs may also depend on how many admitted graduate students want to receive free tuition or extra funding for their studies.

UCLA compensates TAs with salaries or by waiving the cost of their graduate school tuition. If graduate students don’t get fellowships or other sources of funding, they often become interested in a TA position, Hanna-Harwell said.

At an undergraduate student government meeting, USAC Academic Affairs commissioner Ashly Mohankumar said her office would collaborate with GSA on a survey to find which classes need more TAs or discussion sections.

Mohankumar said she thinks students will not feel negatively impacted by the increase in enrollment if they take advantage of on-campus tutoring and counseling resources.

“We should make sure that students don’t feel like there’s been a reduction in the number of resources available to them or the amount of attention they’re getting just because their teaching assistants have more students to work with,” she said.

Hanna-Harwell said she thinks opportunities for TA positions have been increasing in the past few years.

“Departments now habitually reach out to each other to borrow students,” she said. “Where in the past some graduate students may have had to scramble for TA positions, it’s easier now to find one in a related field.”

Cox said the university is still planning for the coming year, and discussion sections will continue to be arranged on a quarterly basis.