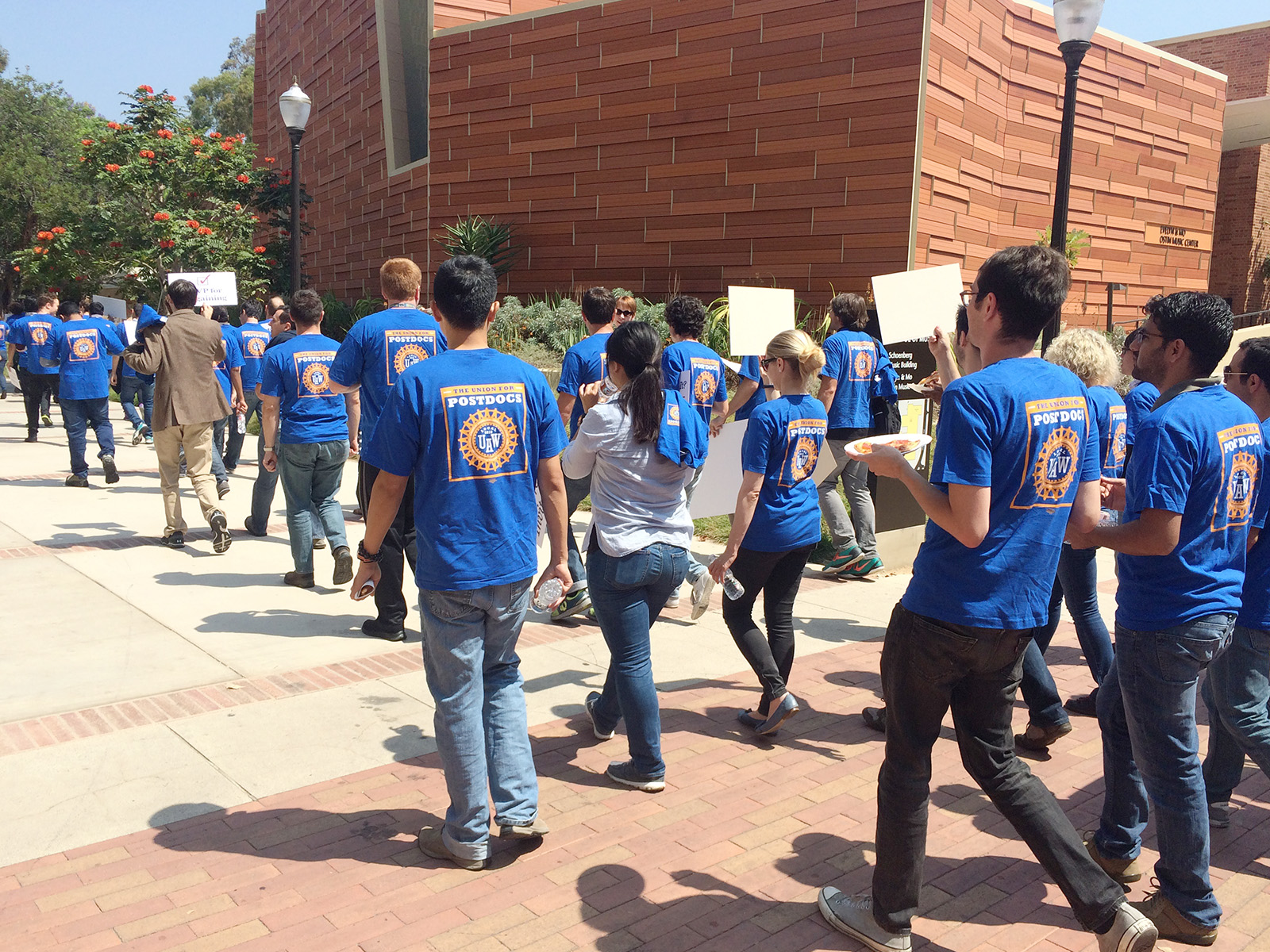 About 200 people marched to Executive Vice Chancellor Scott Waugh’s office from the Inverted Fountain, said Melissa Agnello, a postdoctoral researcher in oral biology and a head steward in United Auto Workers Local 5810. The protesters chanted, “No justice, no research” and “Who does the research? We do the research!”

UAW Local 5810 represents about 6,000 postdoctoral researchers across the University of California, 1,000 of which work at UCLA. The union and the UC decided in October 2015 to postpone negotiations until June and extend its current contract until Sept. 30, 2016, because of changing federal overtime regulations.

She added the UC’s bargaining team refused to negotiate on certain points without approval from executive vice chancellors systemwide.

Supporters marched to Waugh’s office because the union wanted him to either engage in the bargaining session or authorize the bargaining team to negotiate, Angelo said.

Kate Moser, a UC spokesperson, was not able to confirm or deny union claims that the UC’s bargaining team has been uncooperative.

“We are making progress on key priorities and hope to reach an agreement before the existing contract expires,” she said in a statement. “We bargain at the table, not the media.”

Anke Schennink, president of UAW Local 5810 and a member of its bargaining team, said she thinks the UC has been unreasonably slow on issues such as compensation and paid parental leave even though they have made progress on other issues such as nondiscrimination policies.

“It’s not just the people bargaining at the table who care about our contract,” she said. “It’s the hundreds of postdocs showing support, showing the UC they want to be taken seriously.”

She said she thinks the UC’s bargaining team has been unprepared and slow to make counterproposals, even though they knew many of the union’s proposals since contract negotiations were postponed in 2015.

Schennink added the UC’s team has also been late to many sessions.

Agnello said protesters were unable to enter Waugh’s office or reception area, but two people from his office staff came out to speak to them.

“Postdocs drive many institutions, including the UC,” she said. “We need the UC administration to show up to the table and not take us for granted.”