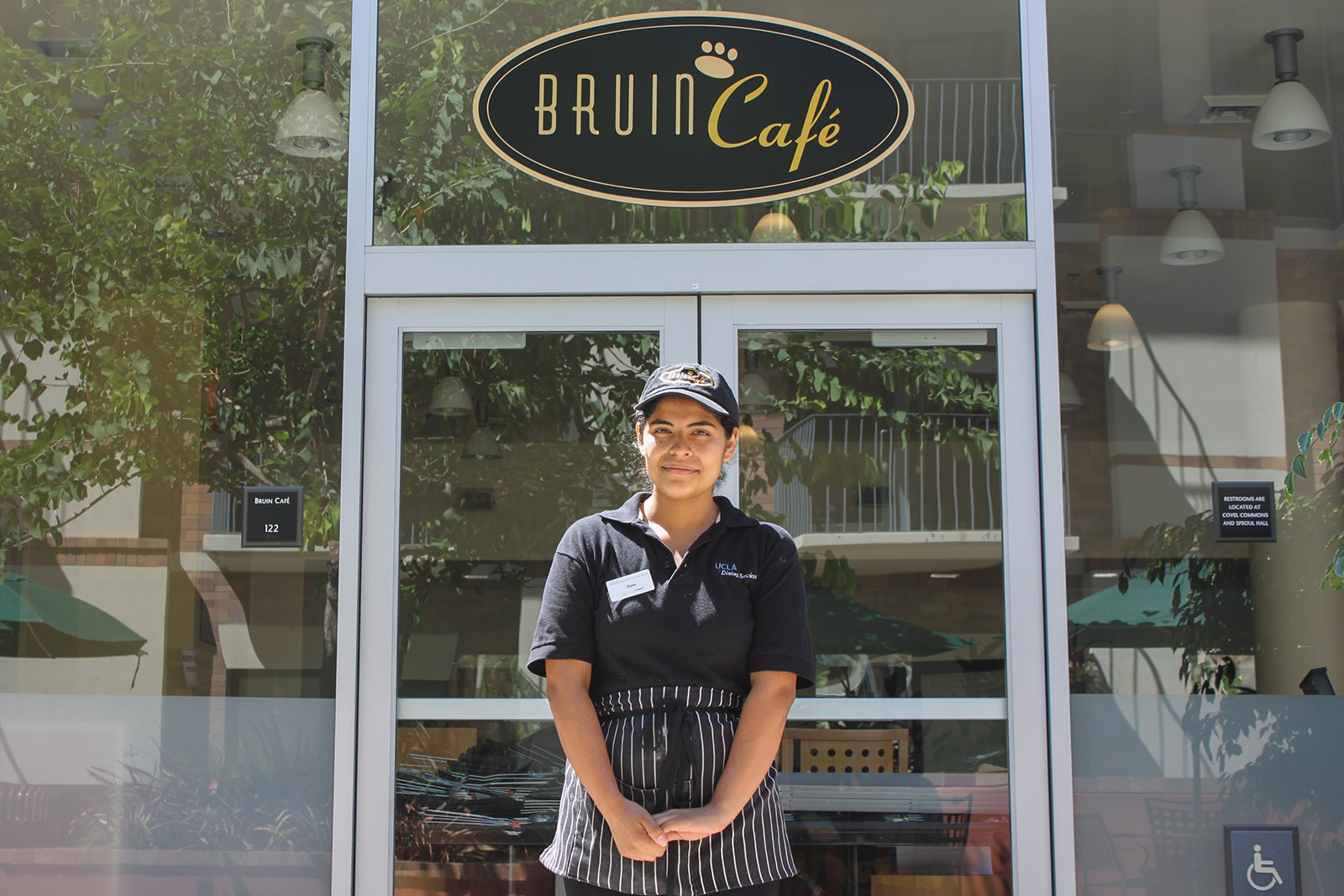 Carrera said she met with Charles Wilcots and Luis Martinez, UCLA Dining Services assistant directors, Tuesday to discuss her concerns. They told her the department had no control over students’ wages, she said.

She said she plans to start a new petition to organize all student workers in Dining Services and possibly join a union that can represent them.

Carrera emailed a letter to five Dining Services directors Aug. 8 arguing that students did the same work as career workers and deserved the same pay. When no one had responded by Aug. 12, she started the petition, which has gathered 115 signatures as of Sunday evening, and sent the letter again. Two of the directors contacted her later that day to arrange a meeting.

“This inequality is growing a resentment in me towards my school,“ Carrera wrote in the letter. “This injustice is a statement of hypocrisy for a university that holds integrity as one of its core values.”

Peter Angelis, assistant vice chancellor of UCLA Housing and Hospitality Services, said he was not aware of the petition until he was reached for comment and had never heard complaints against the wage difference in his 10 years at UCLA.

Student workers’ responsibilities are limited to simple tasks such as serving food and cleaning their areas, he said. They are not supposed to complete duties that are potentially dangerous, such as handling specialized equipment or working alone.

But Carrera said she thinks the rules are impractical and poorly enforced in UCLA Dining Services.

When career workers are on break or call in sick, student workers often replace them at their stations, Carrera said. She said she has even seen students train new career workers and lead food stations.

“Because of the nature of the work, enforcing the policy is almost impossible,” Carrera said. “To expect us to do different work is impractical, so the logical solution would be equal wages.”

However, UCLA officials said they think the lower wages are fair because, unlike some off-campus employers, the university prioritizes students’ education.

Angelis said student workers usually have little experience when hired, need more flexible hours and have a much higher turnover rate compared to career staff because they matriculate.

A significant cost increase in wages could make it harder for UCLA Housing and Dining Services to hire students because of the convenience they’re given, Angelis added.

“We are a very understanding employer,” Purtell said. “For some students, we are their first employers. We are the ones training them and developing them for leadership positions.”

Carrera said she thinks the lower wages can prevent students from focusing on school because they need to work significantly more to cover expenses.

“I work at UCLA just so I can pay for UCLA,” she said. “This is the most overworked, underpaid and underappreciated job at UCLA, but we sustain ourselves off these paychecks.”

Linda Gaddie, the director of compensation, benefits and employment services at UCLA Human Resources, said student workers are assigned one of four positions based on job responsibility, which determines their wage range.

All student wages will increase as the local minimum wage goes up, she added. The minimum wage in Los Angeles is increasing incrementally to reach $15 by 2020. However, the UC raised its minimum wage to $15 for all full-time employees.

Andrea Tran, a rising second-year medical student who earns $10.50 an hour as a UCLA Dining Services employee, has worked in Bruin Cafe since 2012. She said she has been in the same student assistant position as when she started and has received pay raises only when the university increased the minimum wage across the board.

Tran said she works between 30 and 42 hours each week in addition to her schoolwork. New hires, students and career workers sometimes assume she is a career worker because of her experience and frequent presence, she added.

Student workers can receive incentives, such as gift cards or end-of-quarter bonuses, to work more and excel at their job, Tran said. But she said she thinks these benefits are not enough. She said she thinks UCLA Dining Services may not have to give students and full time employees equal wages, but should give hardworking students raises or bonuses.

“There’s a huge wage difference so even a couple dollars for students performing tasks beyond the call of duty would help,” Tran said. “Although wage equality would be nice, it wouldn’t necessarily be fair.”

Carrera said she is researching whether it is possible for student workers to collectively bargain with career workers, who are represented by the American Federation of State, County and Municipal Employees 3299 union.

She was recently offered a job at In-N-Out, where she could earn $13 an hour, but she declined the job.

“A big part of me wanted to quit working for dining services so I can enjoy my last year,” Carrera said. “I know if I quit and just get another job, they’re just going to continue this inequality for generations of students to come. I’d rather stay and help end this.”

She will meet with a UCLA dining hall official again Thursday to follow up on her concerns.