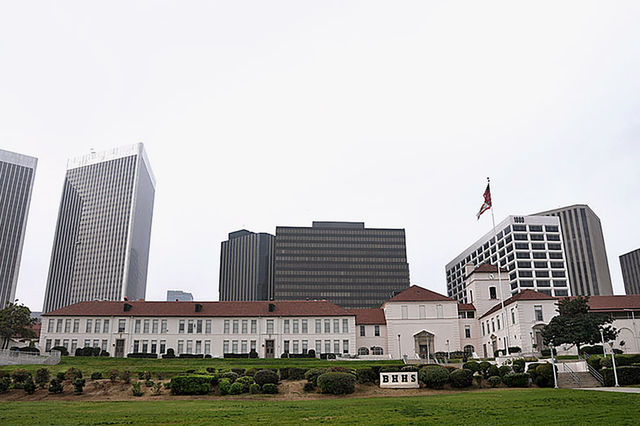 Beverly Hills has sent a clear message to the Metropolitan Transportation Authority about its proposed Purple Line subway extension route running under the city. Quite literally, “It’s our way or the highway.”

The extension, which could be completed by 2024 if a voters approve a 0.5 percent sales tax in November, will finally connect UCLA to Los Angeles’ burgeoning rail system. It’ll be a massive boon for commuters to the Westside who currently have to stew in traffic on the 10 Freeway or the Wilshire corridor.

There’s just one problem: The extension is supposed to run under the city of Beverly Hills, specifically under Beverly Hills High School, and concerns about the sub-school tunnel have given city leaders tunnel vision. In increasingly clear displays of obstructionism, they’ve spent the past five years trying to derail Metro’s plans.

But it’s time for Beverly Hills’ interests to step off the brakes of opposition to the subway. They’ve spent a lot of taxpayer money and made quite a fuss over the years, but they’ve accomplished little of actual substance.

Their latest loss in this sub opera came on Aug. 12, when U.S. District Court Judge George Wu handed down his decision on a lawsuit brought forward by both the city of Beverly Hills and the Beverly Hills Unified School District against the Federal Transit Authority. In an appeal from a 2014 decision in Metro’s favor, they wanted FTA’s approval of the route nullified and a complete redo of Metro’s environmental impact statement. This would have cost Metro millions and delayed the construction timeline. In his ruling, Wu upheld the FTA’s prior approval, which means that Metro can secure its federal grants and loans and award contracts without having to revise its entire impact statement or change its proposed construction schedule.

It’s a victory for Metro, but the drama is expected to continue because Wu also ruled that Metro needed to redo parts of its environmental impact report. While Metro officials say they’re eager to make the revisions, BHUSD attorney Jennifer Recine put out a statement following the ruling that this decision proved the FTA “violated federal environmental law,” and that BHUSD would have further legal claims once the presumably “superficial” revisions were made.

If Beverly Hills’ endgame is to stop the subway from running under the high school, they should quit while they’re behind. This is becoming an increasingly futile, costly and embarrassing battle for Beverly Hills’ leaders.

The city’s scare campaign has flitted from issue to issue, sometimes taking bizarre turns. The Beverly Hills Courier claimed that the Islamic State group would use the still-unbuilt subway to bomb Beverly Hills High School. The school board enlisted high school students to bring a consultant’s ideas to life and produce an anti-Metro video. The local parent-teacher association put out their own over-the-top video, complete with conspiracy theories and imagery that would have made the guys behind Lyndon B. Johnson’s Daisy Girl attack ad blush. And to top it all off, the school district has astronomical legal fees from all these court battles and public relations firms, which the district has justified paying with school construction bond money.

It’s certainly an impressive exercise in community hysterics, but all it’s gotten them so far is some failed lawsuits and not much else.

As with most things bureaucratic, Metro’s reasoning is a bit more mundane. According to Zev Yaroslavksy, member of the Metro Board of Supervisors until 2014, noted Metro-booster and current UCLA professor, the decision to run the subway under the high school was made to avoid an earthquake fault along Santa Monica Boulevard. Beverly Hills has denied the existence of this fault.

The route itself came from a decision to construct a Purple Line station in the middle of Century City, where it would provide its riders better accessibility and help it compete for federal grants, all at the lowest cost per passenger-mile. Yaroslavksy says there’s no reason to deviate from the proposed plan and have a more costly and less useful subway over technicalities in a report.

It’s easy to dismiss all that as the sweet talk of a biased official, but Wu’s ruling supports Yaroslavksy’s claims. Subway opponents say that his statements regarding the environmental impact report mean that the FTA relied on “faulty science.” Page 11 of the ruling clarifies: “As to those errors, the Court did not find that the FTA had actually made substantive decisions (e.g., the selection of the location for the Century City subway station) that were demonstrably wrong. … Additionally there is no indication that the FTA would be unable to offer better and/or more complete reasoning for its challenged decisions herein.”

In other words, the court didn’t find evidence that Metro and the FTA made flawed decisions, nor did it find the report’s errors serious enough to vacate the FTA’s approval and force a complete redo of the environmental study.

Make no mistake, safety concerns should be of the utmost importance, and the ideal situation would be that Metro and Beverly Hills work out an agreement on how to best redo the impact statement. However, there’s little to suggest future reports or lawsuits will produce new evidence against the route, and this puts BHUSD in a weak position for future litigation. So while we can expect Beverly Hills’ interests to appeal the decision and continue throwing money at this issue, we may be witnessing their last gasps of serious opposition.

Which is just as well. UCLA and Westwood need a viable rail option to connect them with the rest of the city, and this Purple Line extension will prove a valuable addition for student commuters and anyone else looking for an easier way to get around.