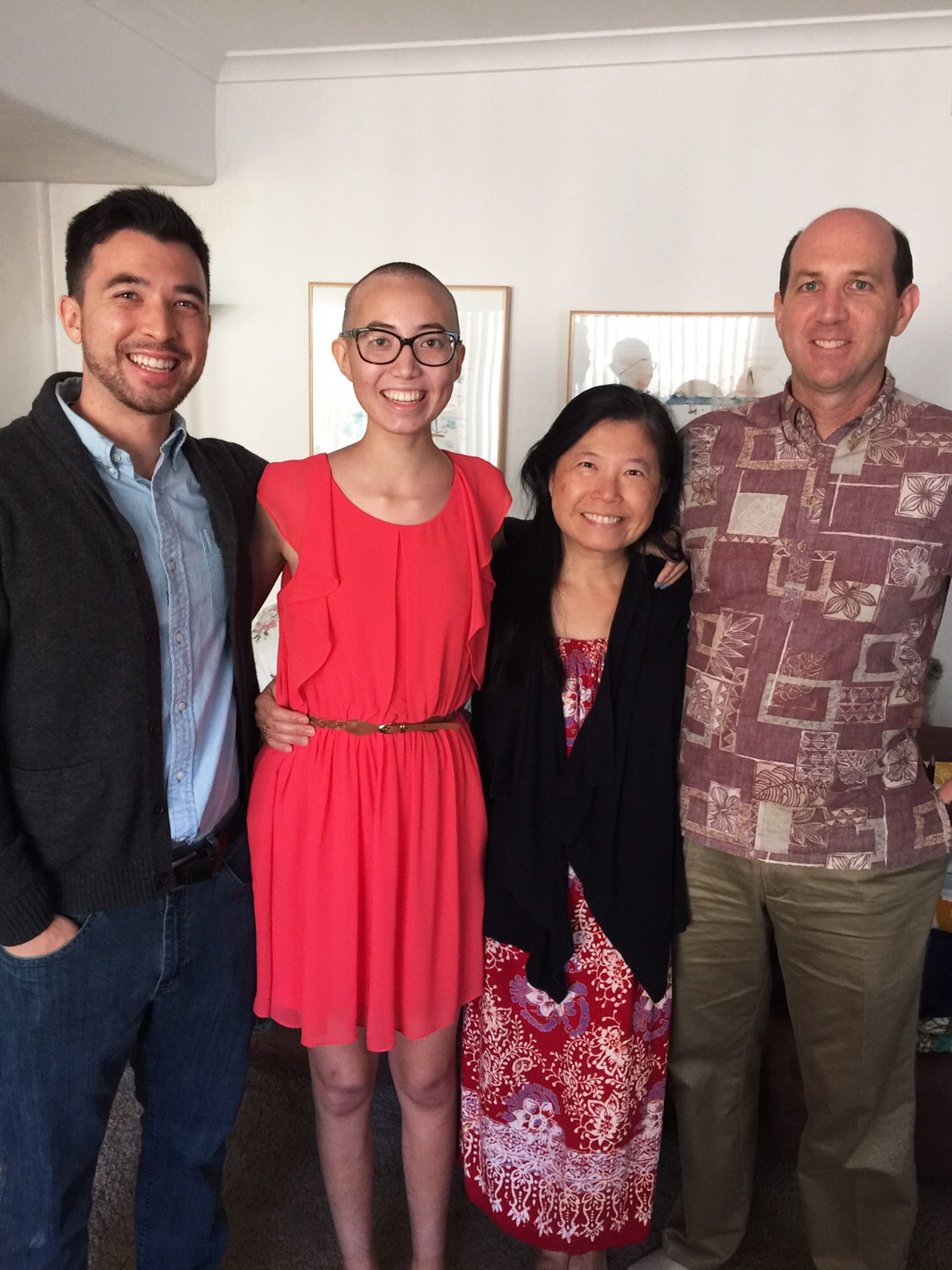 Katie Naftzger, who was diagnosed in April with a rare form of leukemia, is hoping to find a stem cell donor who can match her German and Taiwanese genetic makeup. (Courtesy of Katie Naftzger)

John Naftzger found a picture taken of his daughter last April, days before she was diagnosed with leukemia.

In the photo, a boy that Katie babysat had fallen asleep with his head leaning on her arm, which was in severe pain at the time from her undiagnosed cancer.

“She had a smile on her face,” John Naftzger said. “She didn’t want to wake him up.”

When untreated, the cancer damages the body’s production of white blood cells, which can lead to symptoms such as anemia, fatigue and a weakened immune system.

Because she is half German and half Taiwanese, a rare genetic combination, and suffers from a rare form of leukemia, the family has not been able to find a viable donor for a stem cell transplant, Katie Naftzger said.

Viable stem cell donors would have to be of similar ethnicity to Naftzger, and even within that group of potential donors, the chances of a person genetically matching enough to donate are still very slim, said Tim Naftzger, Katie Naftzger’s brother.

“The odds are slim,” John Naftzger said. “We’re looking for a miracle.”

On June 6, Tim Naftzger began a GoFundMe page to try and find a potential donor for Katie’s transplant and pay for her treatments. Searching the international registry of donors has proved fruitless, he said.

The GoFundMe campaign has raised more than $31,000 since it began and has led about 70 people to submit genetic testing for the transplant. But none have resulted in a close match for Katie, Tim Naftzger said.

When Naftzger’s parents and brother learned she had cancer, they immediately relocated to Los Angeles. Naftzger was admitted to the hospital for a month of intensive chemotherapy a day after her diagnosis.

Naftzger’s body weakened and she lost more than 30 pounds during her chemotherapy, making it difficult for her to walk, she said. Because the chemotherapy also weakened her immune system, Nafzger had to avoid certain fresh foods that could make her ill.

“I think it really put things in perspective,” Naftzger said. “Now I eat nothing but fruit, and all these things I didn’t appreciate before.”

Katie Naftzger said the Christian Students at UCLA, of which she is a member, and the local church community have been supportive of her and her family.

Katie’s friends and members of her church would bring her mother meals and do her laundry as she spent hours next to Katie in the hospital, Naftzger said.

John Naftzger added they have received messages of support from churches and individuals all over the country.

“I don’t know how anyone could survive this sort of thing without the support of their friends and family,” Katie Naftzger said.

John Naftzger said his daughter wanted to write thank you cards to friends and acquaintances for supporting her through chemotherapy.

She began writing the cards but then stopped and stared at them for an hour before bursting into tears, John Naftzger said.

“She said, ‘This might be the last thing I say to this person,’” John said. “That’s when it really hit me.”

Naftzger and her family are currently waiting for her doctors to decide the best course of treatment, if they can’t find a good match for a transplant, said her mother, Lois Naftzger.

Her options may include a riskier transplant from a frozen umbilical cord that is an 83 percent genetic match for Naftzger, or two years of treatment with chemotherapy pills that might have the same effect as a stem cell transplant, she said.

“Our prayer and our hope is for the best outcome for her so that we can see her graduation at UCLA,” Lois Naftzger said.

Naftzger has put school on hold since her diagnosis and is slowly gaining strength after the month she spent in the hospital, Lois Naftzger said. Katie’s plans for the next school year will depend on what treatment option her doctors recommend, she added.

“It’s hard going from independence … to having (me) come back and help her along,” Lois Naftzger said. “She jokes about being a toddler again because she can’t walk very well.”

Before her diagnosis, Katie Naftzger was interested in genetic research and participated in a genetic counseling student club. Her academic background in genetics gave Naftzger knowledge about her disease and a sense of practicality regarding the low chance of finding a viable stem cell donor, she said.

“The future of science really is genetics because you can truly see a disease in a person’s genetics,” Naftzger said. “It all comes down to DNA.”

Naftzger said though she is anxious about her leukemia treatment, having her family and her faith keep her hopeful.

“At the end of it, when I’m finally cured, I’m just going to be stronger and I’ll value things much more,” Naftzger said. “When I do finally get to graduate … I think it will be 10 times the victory.”