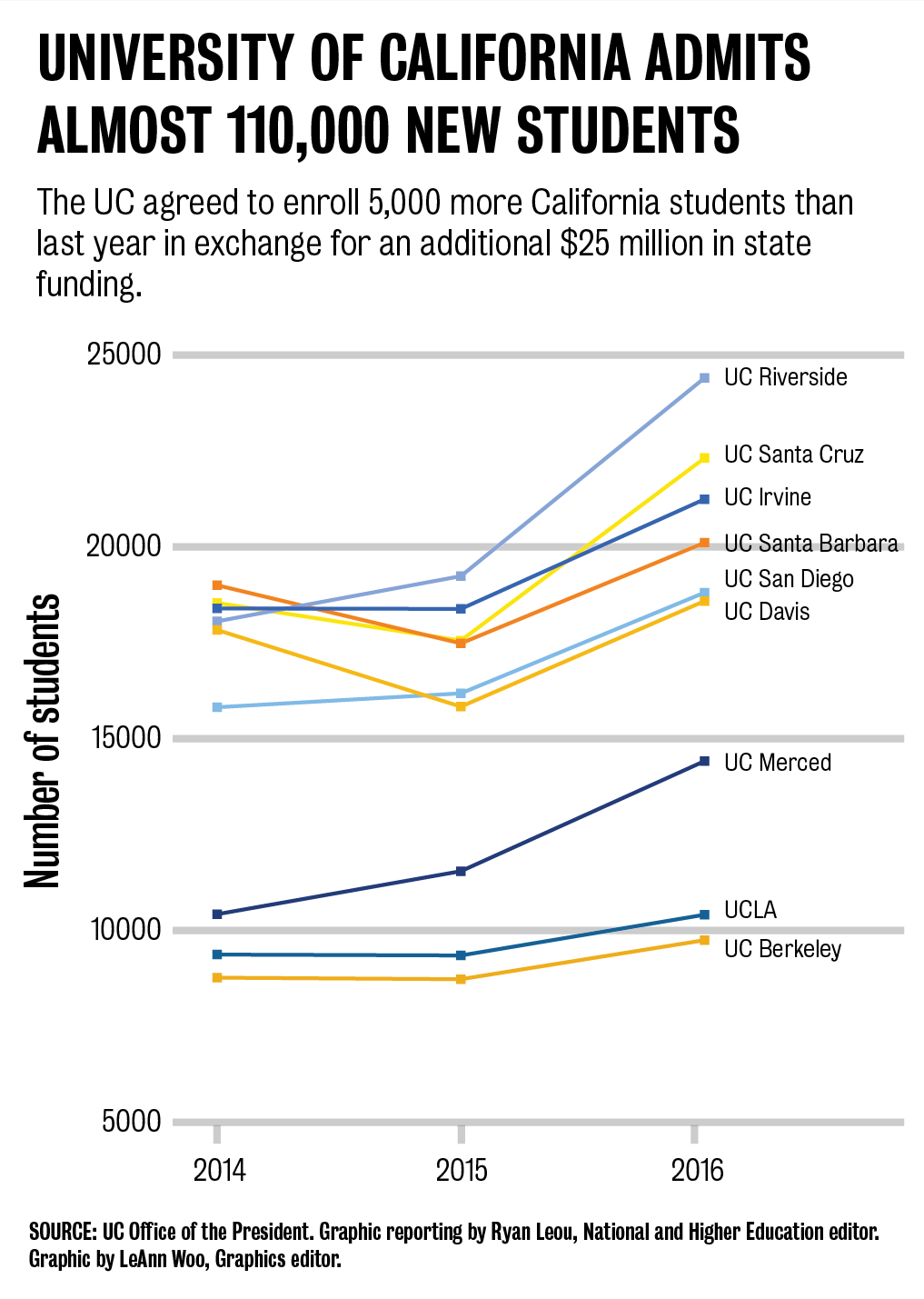 According to data released Wednesday, UCLA offered admission to about 17,500 freshman students and 5,300 transfer students total. About 10,400 of those students are from California, 1,100 more than last year.

The increase in overall enrollment numbers is a result of a 2015 budget deal between the University of California and the governor, in which the University agreed to enroll 5,000 more students than it did last year in exchange for $25 million in state funding.

The admission rate for California students this year increased to 17.7 percent from 16.2 percent in 2015 The overall freshman admission rate was about 18 percent, up from a record low of 17.3 percent last year.

Gary Clark, UCLA director of undergraduate admissions, said UCLA reached out to various high schools, community-based and religious organizations over the past few years to encourage underrepresented minorities to apply to the UC.

“UCLA is trying to meet and interact with students where they are as well as those who influence them,” Clark said. “In order to see any kind of increases (in underrepresented minorities), we need to make sure we have these competitive students apply.”

In one program in collaboration with the Los Angeles Unified School District, UCLA officials met regularly with admissions counselors and principals of about 20 schools, to remind them of UC admission requirements and suggest ways for students to remain competitive when applying.

Clark said UCLA efforts extended across the state, from urban settings in Los Angeles, to the more suburban and rural parts of Kern County, the Inland Empire and Sacramento.

Though outreach programs might have played a factor in increased admission rates for students of color, Clark added he thinks UC plans for expanded enrollment of California students might have opened up more opportunities for minorities.

Danny Siegel, undergraduate student government president, said he thinks the increased admissions for California students is in line with the UC’s mission to serve the state of California.

He added he is most excited about the increase in admissions for underrepresented minorities, including African-American and Latino students.

“We’re doing the right thing,” Siegel said. “It’s a great improvement, but we shouldn’t be satisfied.”

Siegel also said he thinks because of Proposition 209, which bans the use of race as a factor in university admissions in California, UCLA’s outreach programs are a way to ensure a diverse student body.

Domestic out-of-state and international student admission rates stayed about the same at about 22 percent and 14 percent, respectively.

Clark added the enrollment target for nonresident students has remained about 1,600 students for the past few years.

A state audit released in March criticized UC admissions practices, claiming it lowered admissions standards for out of state students to take advantage of the supplemental tuition nonresident students pay. In response, the UC spent about $158,000 on a positive advertising campaign, which included sponsoring Facebook and Twitter posts and public radio announcements that advertised facts about UC admissions and financial aid for California residents, according to an investigation by the Sacramento Bee.

UC faced criticism from state legislators, some of whom tried to pass bills limiting nonresident enrollment at the most applied to UC campuses out of concern nonresident students displaced equally or more qualified California students.

The nine undergraduate UC campuses admitted about 105,000 students with about a 63 percent admission rate.

In keeping with the budget deal, UCLA expects to enroll about 4,800 California freshman students, 1,600 non-resident freshmen and 3,300 transfer students for fall 2016, Ricardo Vasquez, UCLA spokesperson, said in a statement.

Final fall enrollment counts will be released during the third week of fall quarter.