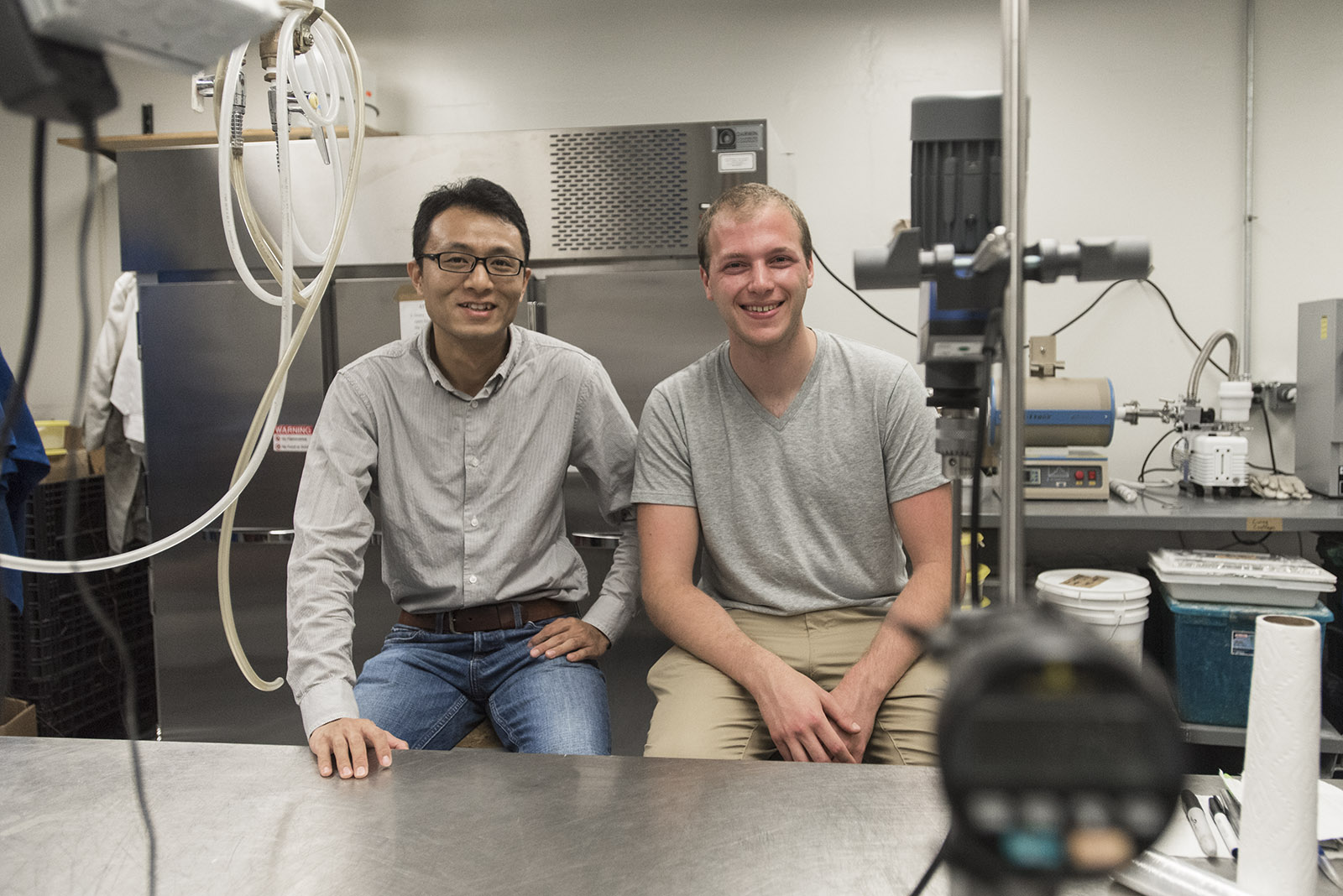 Bu Wang and Gabriel Falzone are members of Carbon Upcycling, an interdisciplinary team at UCLA that came up with a way to incorporate carbon dioxide into the manufacture of concrete, making it carbon-neutral. (Miriam Bribiesca/Photo editor)

An interdisciplinary research team at UCLA is recycling carbon dioxide in a novel process to develop sustainable building material.

Carbon Upcycling consists of 13 UCLA faculty members, students and staff from various fields such as engineering, chemistry and public policy. The team works to incorporate carbon dioxide into raw material that can be recycled into sustainable building material, said Gaurav Sant, an associate professor of civil and environmental engineering and the team leader.

XPRIZE is a nonprofit organization that designs and manages public competitions intended to encourage technological development that could benefit mankind. The XPRIZE challenges scientists, engineers and other innovators to convert carbon dioxide into valuable products.

The competition is primarily sponsored by NRG, a U.S. power company, and COSIA, a coalition of 13 oil sands producers. Winners will be announced in March 2020 and will receive up to $7.5 million each.

Each entry is a paper submission consisting of a demonstration of what technology it applies to reduce carbon dioxide and how it can be carried out commercially in the real world.

“Entering this competition is an incentive for us to turn a concept demonstrated in our lab into reality,” Sant said.

Traditional cement production is responsible for 5 to 7 percent of humans’ annual carbon emissions, Sant said. The cement produced, once used to make concrete​, cannot be ​easily ​reused, he added.

“What we want to do is to transform what is viewed as the problem​ into​ part of the solution,” Sant said. “This is what ‘carbon upcycling’ means.”

The researchers on the team developed a cycle wherein carbon dioxide ​can be used to rapidly transform lime into limestone that can react with carbon dioxide, Sant said. Manufacturing facilities can then use the limestone as the raw material for building material in the future.

“It is an approach that closes the loop from manufacturing to the reuse of building material,” Sant said.

The new material made from carbon dioxide-recycled limestone is as strong as traditional cement and also more efficient for construction because it shortens the material’s cooling time, said Bu Wang, team member and a civil and environmental engineering postdoctoral scholar.

“Traditional cement needs to cool for three to seven days before another layer can be built on the top, but this new material only needs two to four hours,” Wang said. “Applying this material will significantly speed up the construction.”

Reusing carbon dioxide reduces the amount of it in the atmosphere and increases its value, Wang said.

Researchers on the team produce the new building material with a 3-D printer, which increases the efficiency of shaping materials, said Gabriel Falzone, team member and a civil and environmental engineering doctoral student. Shaping becomes more efficient and more precise than the traditional way of pouring cement into a mold.

Capturing pure carbon dioxide for reaction requires a membrane that filters other gases, said Richard Kaner, team member and a distinguished professor of chemistry and biochemistry. Kaner developed a membrane for the project that separates oil from water.

The XPRIZE competition requires the project to be feasible under real-world conditions, in terms of both technology​ and economic value, Sant said. The challenge the team faces now is to develop the production from a lab scale to a commercial scale.

Sant said he is confident this new building material will attract commercial investment. He added he thinks new products and solutions are often expensive when first proposed, but the technology will naturally become more accessible with time.

The team is optimistic that mass production of this new material will effectively mitigate the contemporary climate change problem.

“Engineers have been using cement for about 200 years and the accumulated carbon emissions are striking,” Sant said. “Our solution aims to resolve this problem and we believe it could make a big difference in the future.”