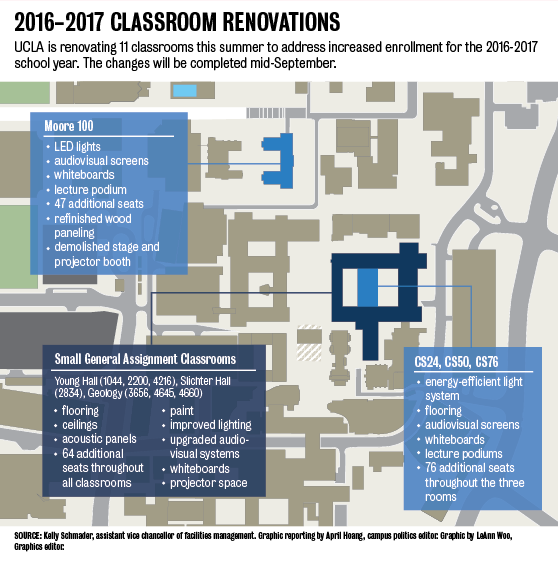 UCLA will spend more than $3 million on renovating 11 classrooms this summer to accommodate an increase in enrollment for the 2016-2017 academic year.

The university will renovate four large lecture halls: Moore Hall 100 and the three Court of Sciences classrooms, UCLA spokesperson Rebecca Kendall said in an email statement. It will also work on seven smaller classrooms in Slichter Hall, Young Hall and the Geology Building.

In November 2015, University of California Regents approved a plan to increase enrollment in the UC by 10,000 students over the next three years. UCLA expects to enroll 750 additional students this fall, Executive Vice Chancellor and Provost Scott Waugh said in an email.

Schmader said the 2015 and 2014 summer classroom renovations budgets were about $1 million each. Schmader estimated the budget for this summer increased by about $2-3 million. He said he thinks UCLA’s efforts to address enrollment growth contributed to this year’s budget increase.

Schmader added the campus began the classroom renovations June 13 to ensure they would be complete for the next academic year. He estimated the smaller classrooms may be finished in early September and all others will be completed by mid-September.

To make room for the new seats in Moore 100, UCLA workers will demolish the stage and the projection booth, which is no longer required for current audiovisual technology, Kendall said. Renovators will also install a new lecture podium.

The funding will come from UCLA’s deferred maintenance budget, which typically covers replacement of building systems like lighting, seating and flooring that are not included in the everyday facilities budget, Schmader said. He added the Office of Instructional Development will help fund the audiovisual aspects of the renovations.

The deferred maintenance budget for this year is about $11 million, Schmader said. Of the $11 million, UCLA gave about $3.5 million to facilities management in early May, before the beginning of the fiscal year, so they could begin the summer renovations as early as possible.

Students said they think the changes will bring both positive and negative effects.

Lucy Gill, a rising fourth-year biology student, said she thinks adding seats to the CS classrooms will be helpful because insufficient seating limited the capacity of her classes. Gill said she has seen students sitting on the steps and leaving on the first day because they couldn’t find a seat.

Courtney Burness, a rising fourth-year film and television student, said she thinks the energy-efficient lighting will save the university money in the long run, but the extra seating will make it more difficult for students to get individual attention in classes.