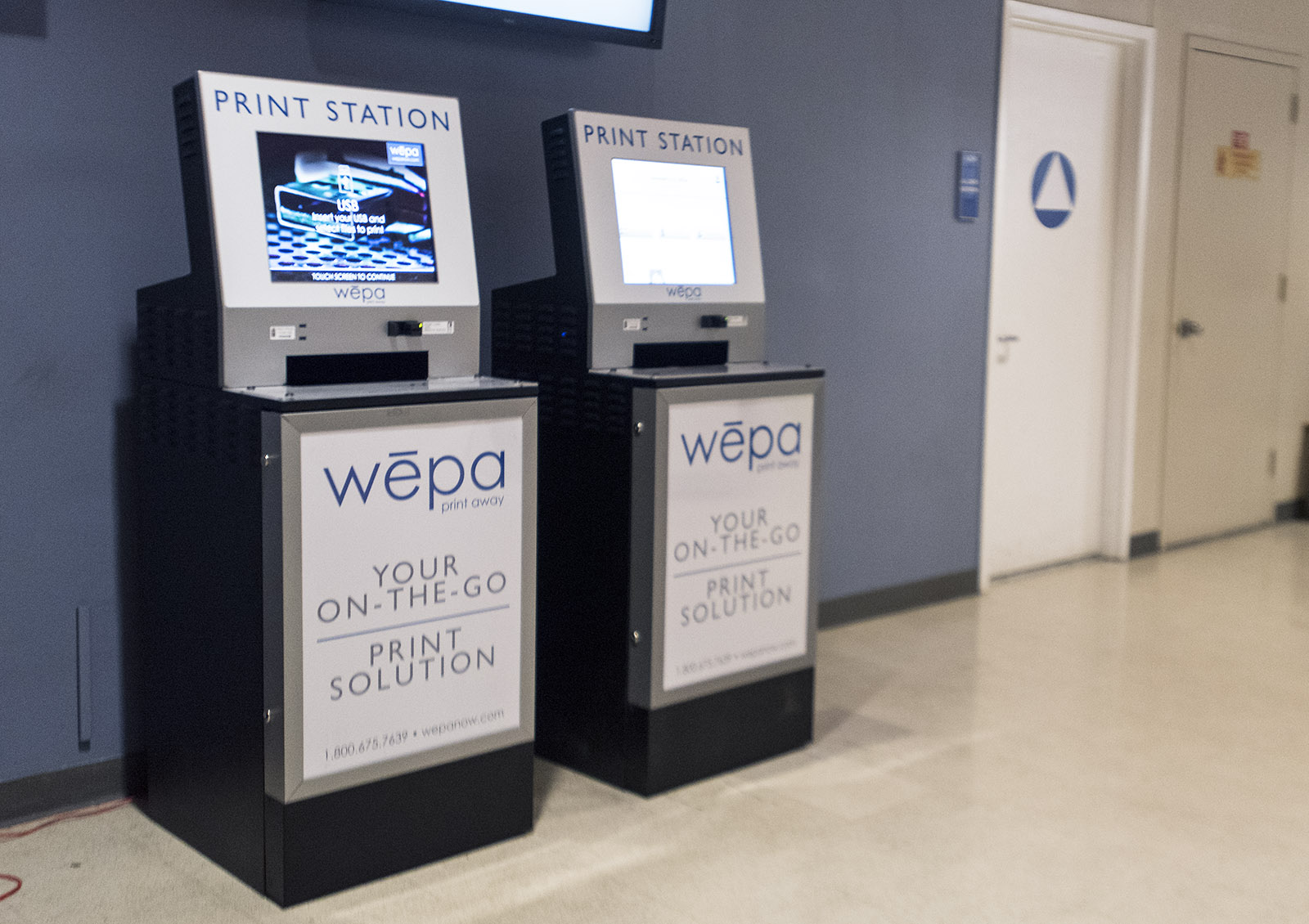 Wepa has new printing stations around campus, allowing students to print from a cloud on the go. Students can use the mobile app, a USB drive, email or the website to send their documents to the print stations. (Miriam Bribiesca/Photo editor)

Students can now print on the go at 10 new printer kiosks around campus.

The printers, which have been on campus since June 15, allow students to send documents to a cloud from their own phones or computers. They can retrieve them by swiping their BruinCards at the kiosks. The kiosk screens will display all of the student’s available documents and allow them to choose which they want to print and pay for on the spot.

The kiosks, which are provided by a print company called Wepa, are located in Ackerman Union, Powell Library, the Music Library, the Arts Library, the Biomedical Library and the Science and Engineering Libraries in Boelter Hall and the Geology Building.

Guy Adams, the Associated Students UCLA outreach and publishing manager, said the kiosks are faster than existing campus printing services because they allow students to use their own devices to print. Students can access their UCLA accounts and upload documents by visiting the website BruinPrint.com.

There are six different ways to upload a document to the cloud, including using a printing app, a USB drive, email or simply uploading through the website itself, Adams said. The cloud is accessible immediately after the student swipes their card at the kiosk.

Adams said this method saves time that students would use to check in at a lab and open their file through a borrowed computer. He added students who are running to class and have less time might find the Wepa printers more convenient and easier to use.

Wepa provides the printer stations at no cost to UCLA, Adams said. Some of the money from the printing fees will go to Wepa as payment for service, and the rest will go toward ASUCLA for managing the printers.

Adams said ASUCLA and UCLA Library chose Wepa because it was the company most compatible with the UCLA network and electronic systems such as BruinCard.

Chia Qi Goh, a rising fourth-year biology student, said he has seen the printers around campus, but he has not used them yet. He said they would be a second option for him until he finishes using the credits he has at locations that offer free printing such as the Community Programs Office or the statistics lab.

DJ Woullard, a rising fourth-year theater student, said he thinks the printers would offer a convenient alternative by allowing students to use their phones to print.

Adams said he and ASUCLA will monitor the project as fall quarter begins to gauge student interest. He said he is willing to consider bringing the kiosks to other parts of campus if necessary.