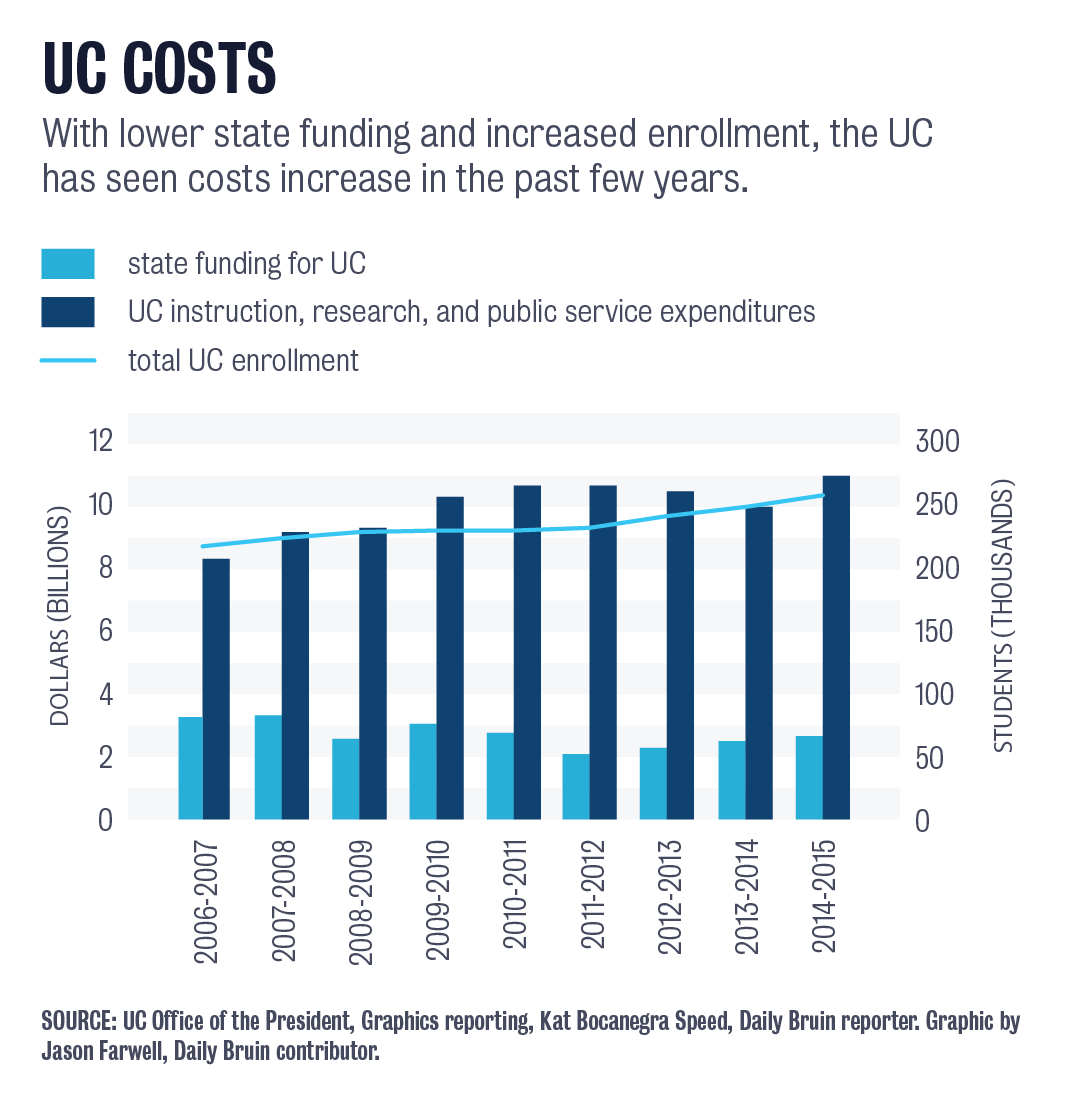 Declining state investment in the University of California and increased enrollment have been sources of tuition increases over the past 30 years.

Tuition increased from $6,000 in 2002, to $12,000 in 2012, according to a Public Policy Institute of California report. UC spokesperson Kate Moser said the UC raised the cost of tuition to offset the decrease in state funding.

California invests less per student in its public universities today than it did 30 years ago, according to another PPIC report. In 2013, California spent about half as much as it did in the late 1980s per student in the UC system.

Hans Johnson, an expert in higher education at the PPIC, said the cost to educate students has not changed significantly.

“The state no longer subsidizes education to the extent it used to, so the UC and CSU have had to dramatically increase tuition to make up for the lack of state funding,” he said.

Patrick Murphy, an analyst who specializes in higher education for the PPIC, said finding the exact reasons for an increase in UC spending each year is difficult. For instance, the report saw little change in the overall distribution in the University’s spending, Murphy said.

He added decreased UC funding must be viewed within the larger context of additional demands for the General Fund, which is the state’s fund for general spending.

Most of the state’s General Fund comes from income taxes, sales taxes and corporation taxes, according to the Legislative Analyst’s Office.

“Right off the top you are left with a smaller pie because 40 percent of the general fund is going to K-12 and community colleges,” Murphy said. “Now you have prisons, higher education and other functions of the state that are competing for the piece of the pie that is left.”

Kenneth Kapphahn, a higher education analyst in the Legislative Analyst’s Office, said he thinks it is difficult to determine if Proposition 98 is responsible for reducing UC funding.

Some students, labor unions and fiscal watchdog groups attribute rising cost of education to increased administrative costs. However, PPIC data reveals faculty compensation and administrative support spending by the UC declined between 2006 and 2012.

The UC spent almost $200 less on administrative costs per full time student in 2012 than it did in 2006, according to the PPIC report. The UC increased spending on student services by 24 percent, including financial aid, advising and student organizations, according to a UC report.

Despite lower state funding for UC during the recession, levels gradually rose as the state recovered and received more tax revenue. In 2015, Gov. Jerry Brown and UC President Janet Napolitano agreed on a deal for a two year tuition freeze for residents in return for more money from the state.

Johnson said the PPIC report did not consider the budget deal because the PPIC wrote the report before data could be collected. He added the only way the UC can keep tuition frozen is if the state increases University funds.

“Every year, the costs of education go up due to inflation,” Johnson said. “The recent increase in state expenditures has helped to cover the rising costs due to inflation so tuition doesn’t go up.”

The UC will likely raise tuition again in the 2017-2018 academic year, according to the terms of the budget agreement.