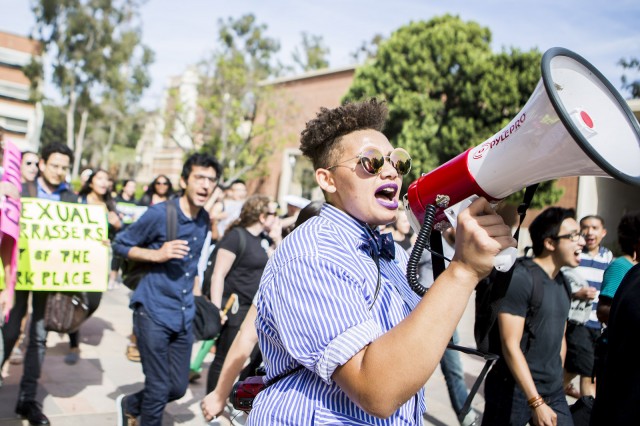 Students and faculty called for professor Gabriel Piterberg’s removal in an April demonstration. Piterberg resigned from a European University Institute position after a petition asked for his removal. (Daily Bruin file photo)

UCLA history professor Gabriel Piterberg, who has been accused of sexual harassment by several graduate students, resigned Sunday from a visiting scholar appointment in Florence, Italy, according to an email from the European University Institute.

The petition cited a federal lawsuit two graduate students filed against the UC Regents in June, accusing UCLA officials of discouraging them from filing sexual harassment complaints against Piterberg. The lawsuit alleges Piterberg made sexual comments and unwanted advances toward the two students.

Before the lawsuit was filed, UCLA and Piterberg reached a settlement in which UCLA suspended Piterberg for a quarter without pay and fined him $3,000, but allowed him to continue teaching. Piterberg also agreed to take sexual harassment training.

The European University Institute had awarded Piterberg the Fernand Braudel Fellowship last spring, around the time Piterberg was suspended from UCLA. The fellowship provides research funding at the institute.

Although Piterberg resigned from the visiting scholar appointment, he remains a professor at UCLA.