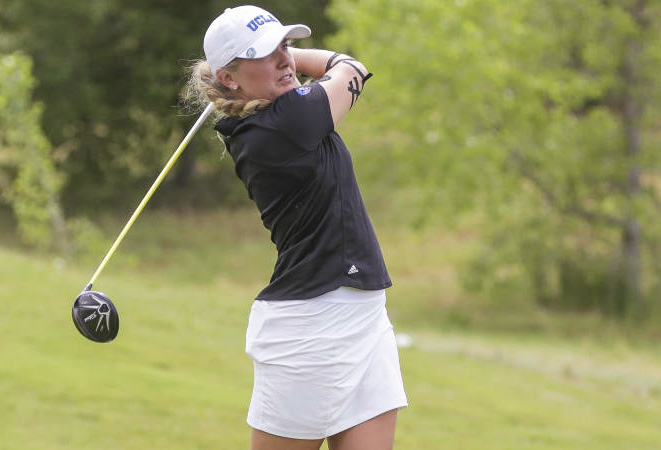 Junior Bronte Law spearheads No. 2 UCLA’s quest for an NCAA championship. The No. 1 golfer in the nation was tied for first after the regional last week. (Douglas Taylor Photography)

No. 2 UCLA women’s golf will be in the hunt to compete for its fourth NCAA championship and the school’s 114th championship overall at the Eugene Country Club this Friday.

The tournament kicks off Friday in Eugene, Oregon, with the first of four rounds of stroke play.

After the opening four rounds, eight of the top 24 teams will advance to the match play portion of the event. This final portion of the tournament consists of the quarterfinals and semifinals Tuesday and concludes with the final two teams Wednesday.

This year marks the second anniversary of the new NCAA Tournament format with the introduction of match play to help determine a winner. In previous years, the tournament winner would only be determined as a result of stroke play.

UCLA is entering the competition after tying for third in the NCAA regional two weeks ago. The 24-team pool consists of the top women’s collegiate teams, six from the Pac-12, including rivals No. 1 USC and No. 7 Stanford, the latter of which won the tournament last year.

The Bruins’ lineup for the event consists of senior Louise Ridderström, juniors Hadas Libman and Bronte Law, and freshmen Bethany Wu and Lilia Vu. As opposed to regular season events where one team member played as an individual, the top four scorers in each round will contribute to the overall team score in the competition.

UCLA will continue to rely on the strong play of Law, who has consistently impressed with her performances this season and remains the No. 1-ranked women’s collegiate professional according to Golfweek. She is also UCLA’s student-athlete of the week, as she tied for first in the NCAA regional to help guide the Bruins to their 16th straight NCAA Tournament appearance. In last year’s edition of the tournament, Law tied for 18th overall. She has three first place victories, the most for the Bruins this season.

Freshman Vu is also looking to continue a strong run after three straight top 15 finishes. She finished tied twelfth, tied third and second in her last three events respectively. Vu is also unbeaten in two regular season match play tournaments this year. She is entering the tournament ranked fifth according to Golfweek.

Coach Carrie Forsyth will look to win her third championship in her seventeenth season with the Bruins.

Last year, the team advanced to the final round of stroke play, where it eventually fell short and finished 15th. The women’s golf team won its last NCAA championship in 2011 when it beat runner-up Purdue in Bryan, Texas. Before that, UCLA beat Oklahoma State in 2004 and San Jose State in 1991 for the title.

The Bruins tee off in the order of Libman, Ridderström, Wu, Vu and Law at noon.