Keshav Tadimeti: Hurtful, discriminatory comments should not be defended as free speech 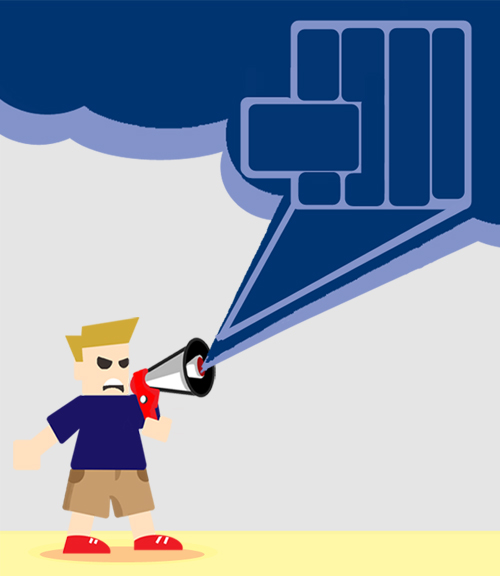 I was sitting at Union Station at 6:30 in the morning, waiting for my train to arrive at the platform. Although I was busy reading on my phone, I noticed a man take a seat beside me. Suddenly, he turned and asked:

“Are you building a bomb? Are you going to blow this place up?”

I was initially confused, but when I looked at him, I knew he wasn’t joking. A chill ran down my spine and I felt the walls closing in on me. In that moment, I feared for my life.

This man knew nothing about me – it was clear his question was based on my ethnicity – but had already assumed that I was a threat to him, despite the fact that I only wanted to get on the train to celebrate a belated birthday with my parents. His discriminatory question was enough to make me curse my ethnicity and regret coming to the station. How audacious of me to think that I was entitled to ride on a train I had paid for.

Discrimination is real. And it hurts, literally.

In fact, numerous neurological and psychological studies have shown that social pain, or emotional distress originating from things such as exclusion, ostracism and discrimination, is perceived by the brain, to a notable degree, like physical pain.

Research pioneered at UCLA has shown that when the human body experiences physical pain, the sensation is broken down by the brain into two components: sensory and emotional. The sensory component is perceived by the part of the brain mapping to the site of the injury, and the emotional distress is usually directed to a region known as the dorsal anterior cingulate cortex, or dACC. But, when social pain is perceived through things like racism or discrimination, the same dACC pathway is stimulated, leading to the characteristic “sting” of pain.

In other words, punching someone in the face and making racist comments about them are similarly perceived by the brain, activating many of the same pain receptors. And it’s clear from recent events that many UCLA students have been getting punched in the face.

Be it the Pi Kappa Phi fraternity’s use of meeting minutes to record racist and misogynistic comments or the Bruin Republicans members’ public denouncing of the transgender community, it’s clear from recent instances of racism and discrimination that we students have failed to see the difference between expressing controversial opinions and propagating hate speech on campus. As if to rub salt on the wound, these groups have rushed to hide behind the First Amendment’s right to free speech to justify denigrating members of the student body.

However, this free speech argument is little more than a facade and students need to realize that there is a clear distinction between free speech and discriminatory speech. Controversial opinions sanctioned by the right to free speech are not the same thing as disparaging comments that needlessly harm members of the student population – the former sparks discussion about the topic, but the latter, despite how legal it may seem, only butchers discussion altogether.

In this regard, students that propagate hate speech, thus advocating for discrimination, directly harm their victims. Making sexist and racist comments may simply seem like an expression of free speech, but it is little more than discrimination wrapped in an artificial, if legal, excuse.

Of course, one could argue that making these comments is just another way of expressing a controversial viewpoint. In fact, the external vice president of Bruin Republicans Alex Rhim stated in a submission column that Bruin Republicans neither endorses nor criticizes the viewpoints of the members who denounced the transgender community, arguing that such viewpoints foster “free discussion” on controversial issues. This argument is similar to ones posed by sympathizers of Pi Kappa Phi – that the fraternity’s members were only exercising their freedom of speech guaranteed by the First Amendment.

However, in the face of the overwhelming research showing that such socially harmful speech has lasting ramifications on victims’ physiological and psychological states, it’s clear that these free speech arguments are meager attempts at justifying hateful viewpoints. Controversial speech is speech that promotes conversation by explaining the merits of a contested viewpoint; hate speech, however, blatantly disparages a group of people without any attempt at sound argumentation.

For example, making racist comments about Mexican people – as did members of the Pi Kappa Phi fraternity – does little to spark conversation, and it’s shameful of students to hold up the freedom-of-speech card when they are putting other students’ psychological and physiological well-being at stake.

Ultimately, if students truly want to engage in constructive discussion about controversial topics, they need to foster a nurturing environment that allows for differences of opinion. Holding up a poster proclaiming that all transgender individuals have mental disorders is by no means a catalyst for inclusiveness.