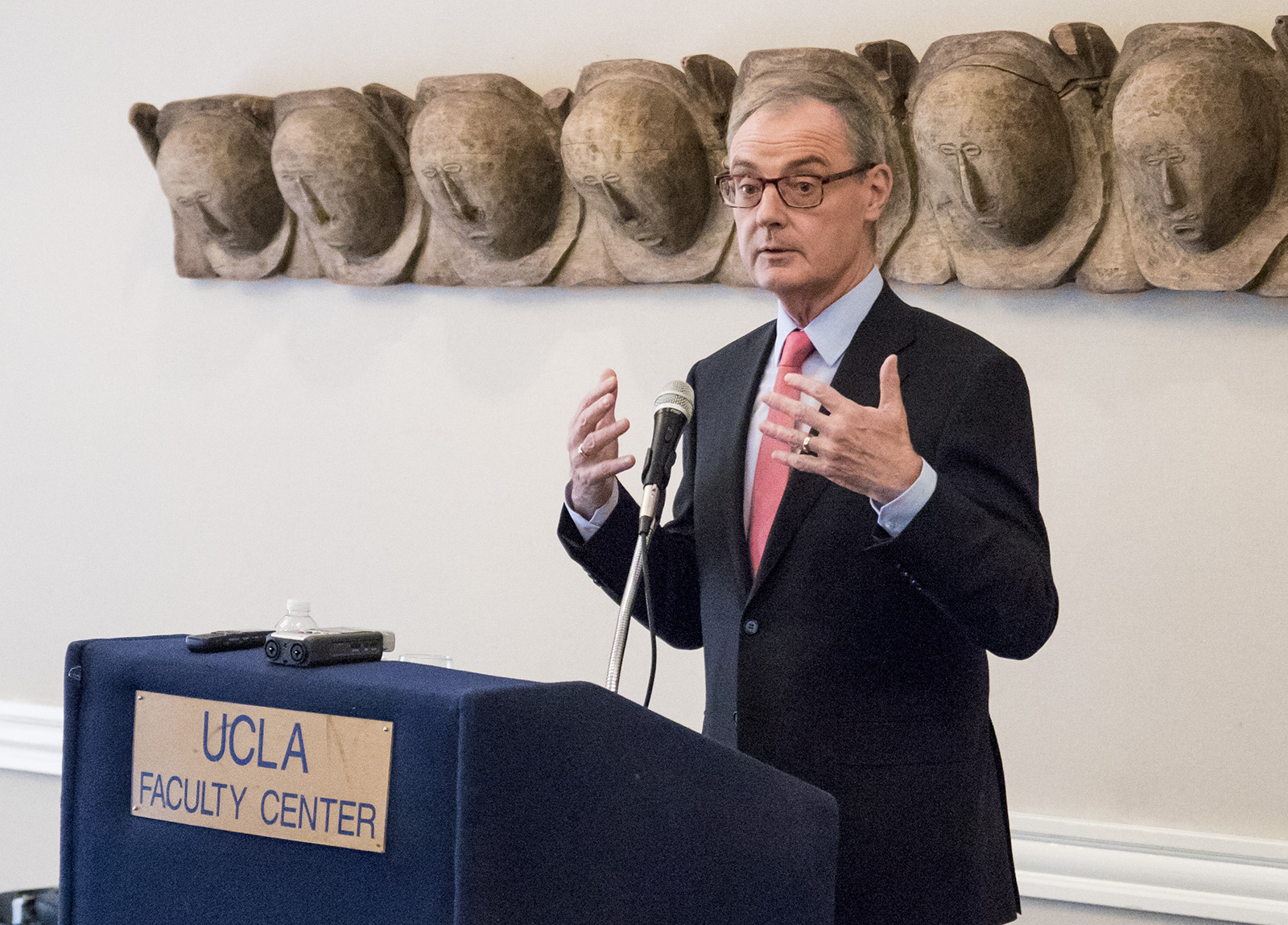 David O’Sullivan, the European Union ambassador to the US, spoke at UCLA Wednesday afternoon about the EU response to the Syrian refugee crisis. (Ken Shin/Daily Bruin)

The European Union ambassador to the United States told UCLA community members Wednesday afternoon he thinks the EU’s member countries need to work together to address the refugee crisis.

About 50 people attended the event, hosted by the Burkle Center for International Relations and the UCLA Center for European and Russian Studies.

David O’Sullivan, also a former Irish diplomat, said he thinks the influx of refugees is a new shock to the EU, but noted the union has donated more money than any other organization, in an attempt to help solve the refugee crisis.

About 1.3 million refugees, mostly from Syria and Afghanistan, have migrated to Europe in an attempt to escape violence in the Middle East, according to BBC. European countries have struggled to accommodate the influx of people, and some have deported refugees to other countries.

O’Sullivan also said he thinks the redistribution of refugees to other countries has been the most controversial part of the crisis. He said he thinks member states should work together, even if some refuse to adhere to an agreement that requires them to take in a certain number of refugees.

He added the EU is not dealing with the refugee crisis on a continental scale and that each member state needs to be more responsible for accepting refugees.

O’Sullivan declined to share his thoughts on the British referendum on exiting the EU, or “Brexit,” only saying he thinks it is in the EU’s best interest the United Kingdom stays in the union, and hopes the UK chooses wisely.

“(The referendum) is their sovereign political moment,” Sullivan said. “The stakes are very high, but at the end of the day (the UK) has to make its own choice.”

“If you said you weren’t going to talk to any countries that (committed) human rights violations, you’d be in a pretty lonely situation,” Sullivan said.

Some students said they attended because they had a personal connection to European issues, while others said they wanted to learn more about international politics.

Mathilda Strobel, a third-year political science student from Sweden, said she attended the event because she wanted to learn more about the Transatlantic Trade and Investment Partnership.

The TTIP, a proposed trade agreement between the United States and EU, aims to promote trade and economic growth, according to the office of the U.S. Trade Representative.

Lily Donnelly, a third-year geography student from the United Kingdom, said she was interested in the impending Brexit and its effects on the U.S. She added she was also curious whether Greece would also stay in the EU over the former’s debt crisis.

“I want to know if it’s in America’s best interest for Britain to remain in the EU,” Donnelly said.

O’Sullivan concluded his discussion by noting the emergence of a debate over national identity as a result of the refugee crisis.

“We can reconcile new cultures while preserving (our) old identities as countries,” O’Sullivan said.